Pacific athlete of the year selections all-Korea, all-Class A 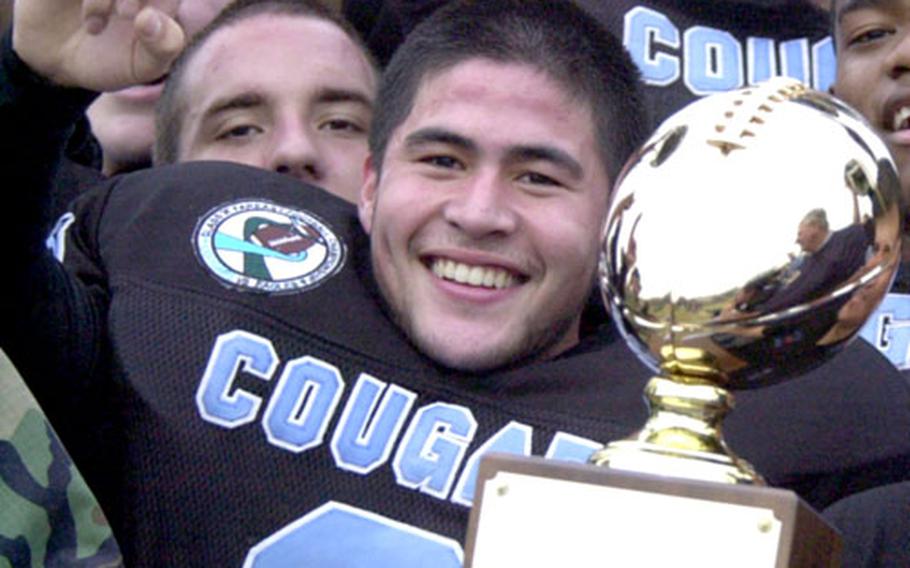 Osan American junior Carlos Albaladejo kicked a 34-yard field goal, made a fourth-down defensive stop and recovered a fumble to squelch an Edgren drive as the Cougars won the Class A football title. (Dave Ornauer / S&S)

Osan American junior Carlos Albaladejo kicked a 34-yard field goal, made a fourth-down defensive stop and recovered a fumble to squelch an Edgren drive as the Cougars won the Class A football title. (Dave Ornauer / S&S) 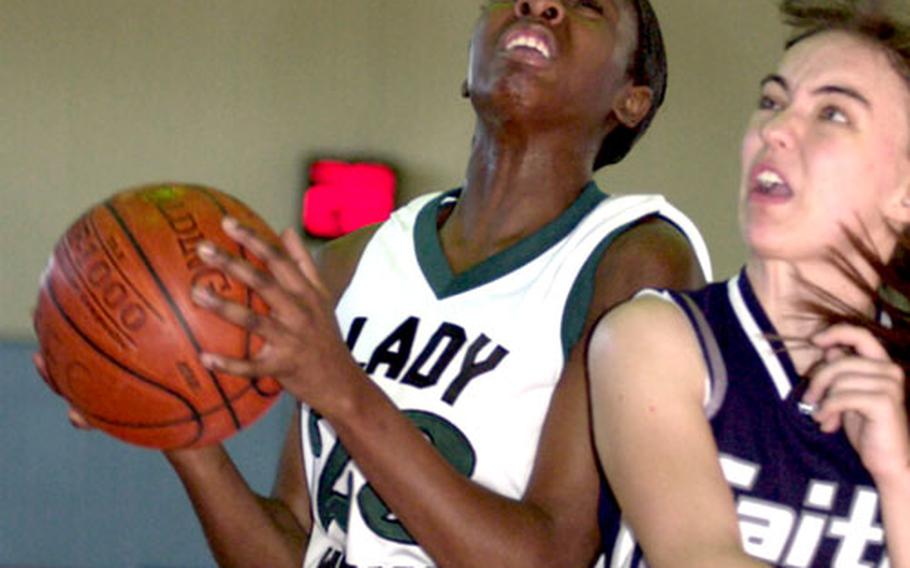 Taegu American senior Lynnette Grant helped the Warriors win Class A championships in girls basketball and volleyball this year. Grant was chosen as MVP of the Class A volleyball tournament. (Dave Ornauer / S&S)

Sometimes, an athlete&#8217;s ability to lead a team, to encourage it when it&#8217;s down or to pick it up and carry it to a title means far more than the statistics he or she accumulates.

Such was the difference made by Osan American junior Carlos Albaladejo and Taegu American senior Lynnette Grant, who led their teams to DODDS-Pacific Class A titles, Osan in football and Taegu in volleyball and basketball.

For their efforts, Albaladejo and Grant share the Stars and Stripes Pacific high school Athlete of the Year award for 2005-06.

Albaladejo contributed wherever he was needed. At fullback, he blocked for freshman tailback Will Rapoza, who gained a team-leading 543 yards on 85 carries with six touchdowns.

Albaladejo saw time at linebacker and safety (17 tackles, 12 unassisted) and averaged 41.4 yards per punt. But his contribution made the difference in Osan&#8217;s 16-14 comeback victory over Robert D. Edgren in the Class A football title game, when he kicked a 34-yard field goal, made a key fourth-down defensive stop and recovered a fumble to squelch a late Edgren drive.

He then tried wrestling for the first time, placing fifth at 158 pounds in the Far East tournament, but &#8220;he quickly became the team leader and rallied his teammates,&#8221; Alvarado said, to the school&#8217;s best finish since the 2000 season.

On the soccer field, Albaladejo earned Korean-American Interscholastic Activities Conference all-league and all-tournament honors, was MVP runner-up and was selected for the All-Tournament team after pacing Osan to a runner-up finish in the Class A soccer tournament.

He could have had more than his eight goals, but chose to play center-midfield &#8220;to benefit the team,&#8221; Alvarado said. &#8220;We were in need of an unselfish player to help distribute the ball and assist other players into scoring. His play was the main reason for our success.&#8221;

On the basketball court, Grant averaged 22 points, 11 rebounds and eight steals and single-handedly led the Warriors to a come-from-behind 38-28 triumph over Faith Academy in the Class A title game.

With Taegu in need of a center fielder because of injuries, she came out for the team after the season had begun and batted .290 with 11 stolen bases as the Warriors beat Seoul American for the first time and won the league title.

&#8220;She was always motivated and self-directed and led the team by example,&#8221; Taegu basketball coach and athletic director Michelle Chandler said. &#8220;When Lynnette stepped up, so did the team. She lifted the play of those around her in all sports.&#8221;

The rest of the 2005-06 Stars and Stripes school year awards:

Coach of the year: Terry Chumley of Kubasaki took rebuilding squads to Far East tournament Final Four finishes in girls volleyball, wrestling and girls soccer, with the Dragons coming within a whisker of capturing their Pacific-record 21st wrestling team crown.

Best new event: Bar none, the Far East Class AA and Class A football playoffs, which had the region talking and produced great games. Certainly, Seoul American&#8217;s 13-10 semifinal upset of Yokota, with its 36-game winning streak, leveled the playing field and gave the region what Yokota had long stripped away from it: hope.

Game of the year: Doug Bloom&#8217;s basket with 3 seconds left capped Yokota&#8217;s rally from a 6-point deficit with 40 seconds left for a 56-55 stunner against Nile C. Kinnick in the DODDS-Japan boys basketball tournament semifinal at Yokota. Three steals and three baskets in bang-bang fashion helped propel Yokota to the tournament final.

Play of the year: Kubasaki sophomore Michael Bennett likely has a career as a stock broker, politician or NFL general manager ahead of him, the way he &#8220;sold&#8221; the game-turning play in the Dragons&#8217; 34-14 victory over Seoul American in the Class AA football championship. The Falcons had just cut the gap to 14-8 when Bennett took the ensuing kickoff at the Dragons&#8217; 16, faked a reverse handoff to Tim Gardner, concealed the ball behind his thigh, peeked over his shoulder as if to monitor Gardner&#8217;s progress &#8230; then ran untouched 84 yards for a touchdown.

Stars and Stripes 2005-06 Athletes of the Year nominees

x-Automatically nominated as MVP or champion of a DODDS-Pacific Far East tournament, or as Athlete of the Quarter during school year.