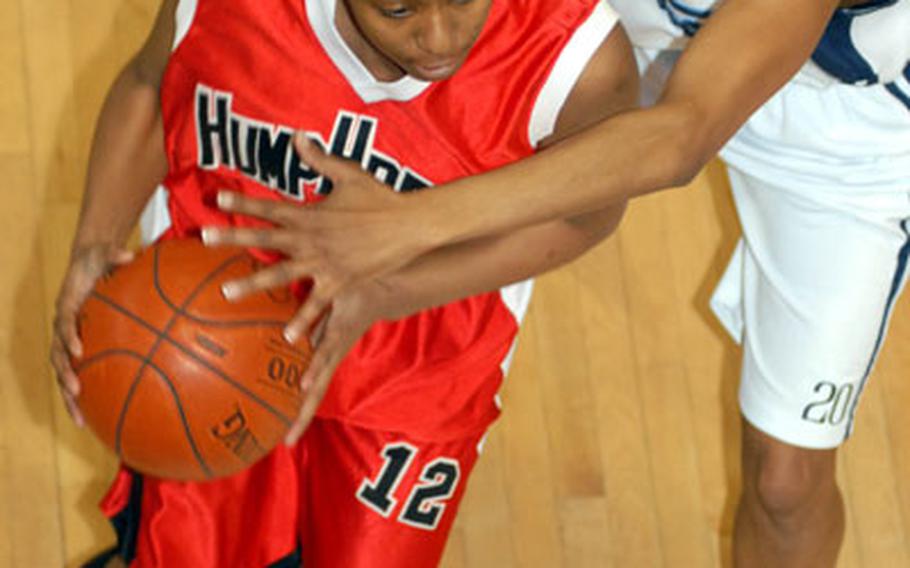 Hawkins shot 14-for-18 at the foul line and finished with 21 points as the host Defenders pulled away in the second half to defeat Yongsan Garrison 91-73 and win the Osan Pacific-wide Open Holiday Basketball Tournament men&#8217;s title.

On the women&#8217;s side, Harrell scored a team-high 19 points, none bigger than her steal and layup with 2:51 left that put Yongsan ahead for good 69-68 on its way to a 74-68 overtime victory over Camp Humphreys.

Men&#8217;s championshipOsan Air Base 91, Yongsan Garrison 73: Steven James put Osan ahead to stay 17-16 on a three-pointer 10:45 before halftime. The Defenders survived seven early lead changes and four ties. Hawkins scored 14 of his 21 points in the first 20 minutes.

&#8220;Practice makes perfect,&#8221; Hawkins said of his shooting touch, the result of sandwiching sets of 10 to 15 foul shots between series of jump shots, sessions that last as long as two hours.

Women&#8217;s championshipYongsan Garrison 74, Camp Humphreys 68 (OT): Harrell stripped the ball from Bulldogs guard Kesha Harper, who with four fouls could only hope that Harrell would miss the ensuing layup. It went in, the last of the game&#8217;s 13 lead changes.

That the Bulldogs, who dressed just eight players and were plagued by foul trouble throughout, hung with the Rebels as long as they did was a testament to the team&#8217;s heart, coach Lolita Lyles said. &#8220;They played their heart out and just didn&#8217;t quit,&#8221; Lyles said.

Humphreys center Lia Green, a former college player at Alabama-Birmingham, suffered most from foul difficulty. She picked up her fourth with 15:29 left and sat all but two minutes the rest of the way. She fouled out with 1:49 remaining with 13 points and 18 rebounds.

Still, Harper scored 28 points, hitting seven three-pointers, and Humphreys had a chance to win at the end of regulation. Robin Mitchell, who scored 20 points, was fouled at the buzzer on a three-point try, but hit only two of three shots to knot it 66-66.

Terri Cage scored 16 for Yongsan before leaving with a charley horse in her left leg. Shelia Soileau scored her 14 points in the second half and overtime.