One season, one title for Ficenec in Europe 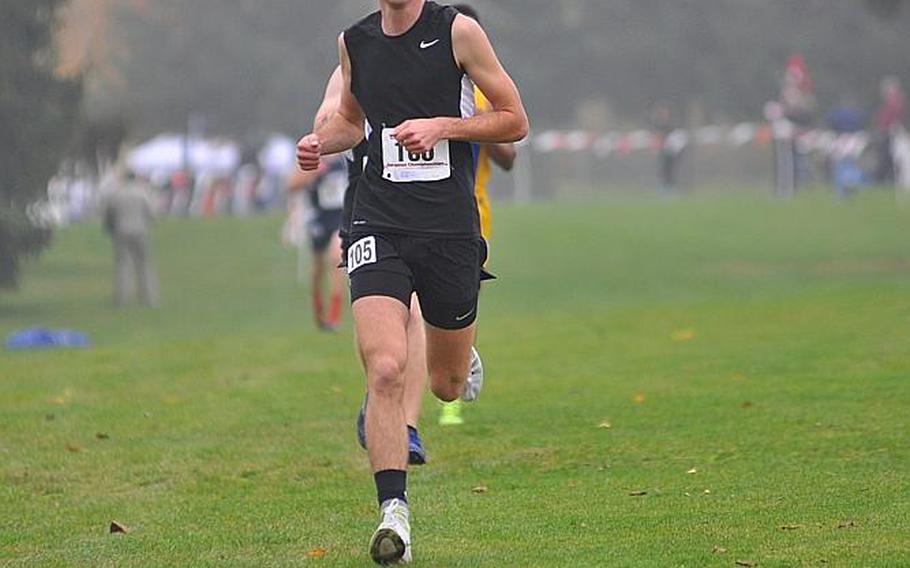 As a rule, Stuttgart senior Hunter Ficenec would prefer to lead a race throughout. In this year’s DODDS-Europe boys cross country championship race, he settled for leading at the end.

Faced with the unfamiliar terrain of Baumholder Army Golf Course, Ficenec adjusted his style to achieve a familiar outcome: victory. As a result, Ficenec is the 2015 DODDS-Europe boys cross country Athlete of the Year.

If he weren’t set to graduate after his only year in Germany, Ficenec might be looking at a dynasty. After his Oct. 31 race, he was prepared to chase a repeat immediately.

“I feel like I could run it again right now, actually,” Ficenec said after the race.

Whether that’s youthful bravado or well-founded confidence is hard to know. What’s clear is that this season, over the 5 kilometers DODDS-Europe requires of its runners on any given Saturday, Ficenec was as good as anyone.

Ficenec came to Germany after a rapid ascent into the DODDS-Pacific elite. Ficenec failed to crack the cross country roster at Kadena as a sophomore; a year later he finished first in the Okinawa finals and second at the Far East championships.

That trajectory continued with his arrival in Stuttgart. Ficenec made an impactful debut in the season’s opening race in Italy, posting a blistering time of 15 minutes, 58 seconds that held up as the best time in DODDS-Europe for the duration of the season.

Still, Ficenec’s season was not without adversity. On Oct. 24, just a week before the championship race, Ficenec finished 10 seconds behind Wiesbaden rival Sidney Perry, ending his regular season with his first loss. But he responded brilliantly, edging Perry and Stuttgart teammate James Fullwood with a winning time of 16:31.40 to capture European gold.

The win was achieved by a subtle strategy shift, Ficenec said.

“Play it smart,” Ficenec said. “And stick with the group this time, because I’ve never run this course.”

That approach worked so well that he not only won the race but shattered the course record in the process.

So while he won’t be competing in DODDS-Europe in the fall of 2016, when a new pack of contenders toes the line at the European cross country championships, Ficenec will still be out in front.