Once focused on hoops, Naples’ Taylor now a two-sport star 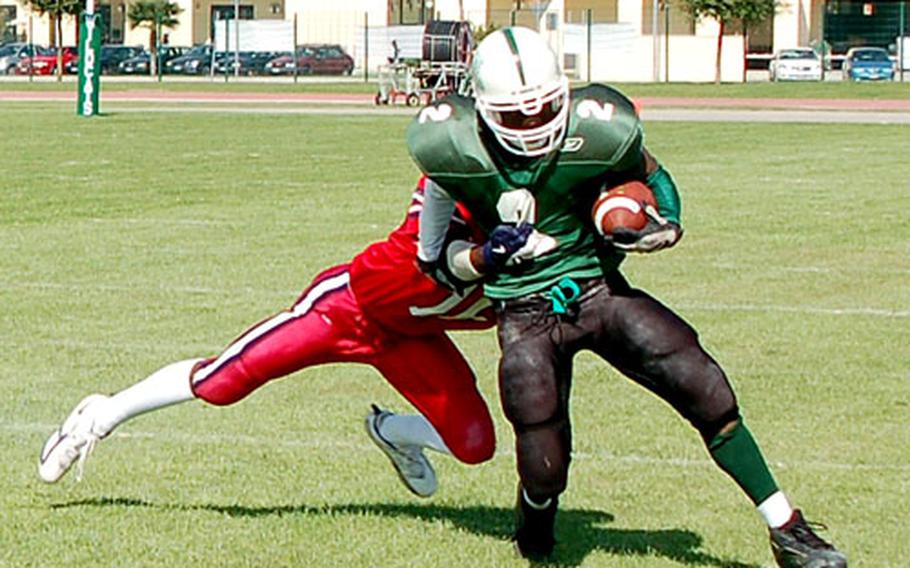 Naples tailback B.J. Taylor tries to shake a tackler during a 40-7 victory against Aviano on Oct. 7. Taylor got one of of the Wildcats’ four rushing touchdowns in the game. (Steve Woolverton / U.S. Navy)

It would be stretching the truth to call Naples senior tailback B.J. Taylor an overnight sensation.

But not by much.

Taylor, 17, had nothing but basketball on his mind when he transferred into Naples from Killeen, Texas, this summer. His daily visits to the gym, however, helped transform him into a two-sport star.

&#8220;Our team was doing some weight training, and they noticed B.J. working out,&#8221; Naples coach Jim Hall said by telephone Monday.

Why after three high school years without playing a down of football did Taylor decide to take the plunge?

Turner proved to be instant offense for the Wildcats.

All right is an understatement. In his first high school game ever, Turner rushed for slightly over 300 yards and six touchdowns in a 54-40 victory at Vilseck.

&#8220;It was clear his basketball skills and vision really helped his spin moves,&#8221; Hall said. &#8220;He can start and stop and change directions instantly. I told him I could throw a dime on the ground, and he could dance on it and give me nine cents change.&#8221;

There&#8217;s more to rushing than elusiveness, however, and Hall is schooling Taylor on that.

The lessons are taking hold. After six games, Turner has amassed 816 yards on 96 carries for the undefeated Wildcats. His total undoubtedly would be more than 1,000 yards had his coaches not decided to limit his touches to 21 over the past two games.

Has his success raised the possibility that football will replace hoops as his main passion?

And there is also the looming possibility of playing for a European Division II football title before basketball season begins. Naples must get past Baumholder in a home game this weekend to qualify for the final on Nov. 4.