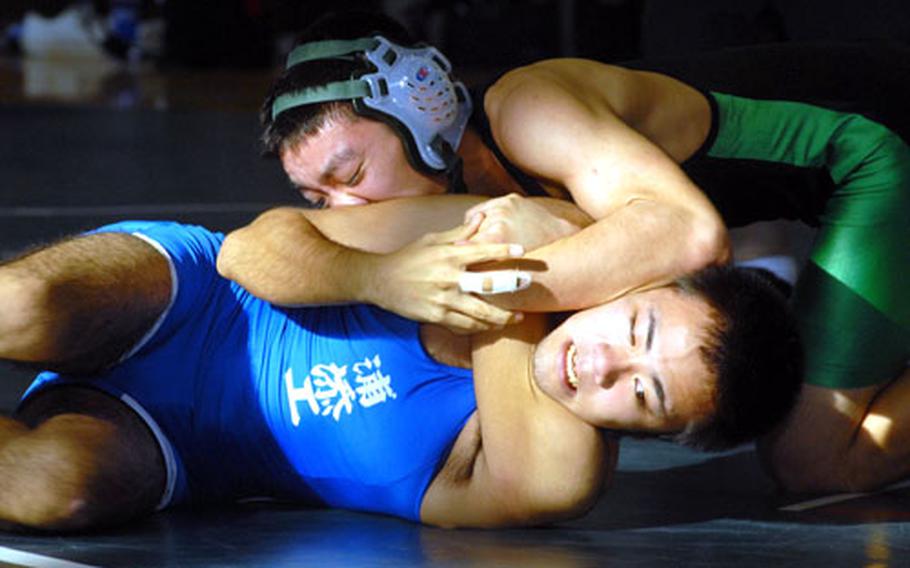 Wood decisioned Murayama 2-0 (5-0, 6-0) and went on to win the gold medal in Saturday&#39;s tournament, one of four American champions in nine weight classes. (Dave Ornauer / S&S)

Much more than a gold medals was on the line in the 2nd Okinawa-American Friendship Wrestling Tournament on Saturday.

The event provided valuable preparation for Okinawa Activities Council rivals Kadena and Kubasaki for the Far East tournament next month. Meet founders said the tournament strengthens bonds between Japanese and American teams who depend on each other for competition.

&#8220;This furthers our competitive reach,&#8221; Kubasaki athletic director Fred Bales said, noting that only in the past year have Japanese high schools been willing to wrestle Kadena and Kubasaki competitively.

Wood captured the combined 108/115-pound gold. Bloom beat his younger brother Harry to win the combined 141/148-pound division. Cash lost in the semifinal, but rallied to win his next three bouts and the 158-pound gold.

Signs of life for Kubasaki girls

After losing its first 12 games of the season, the Kubasaki girls basketball team has shown signs of life in the past week or so.

Junior Gaby Falco scored 18 points in each of Saturday&#8217;s games.