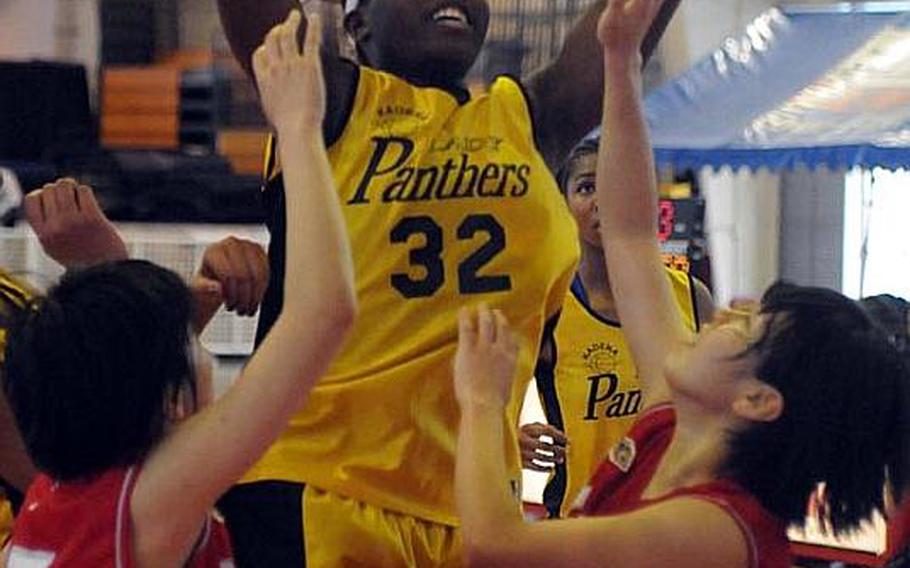 Now comes the speed portion of their January basketball education – the Okinawa-American Friendship Tournament against smaller, quicker Japanese teams. The 12-team tournament takes place Saturday at Sunday at the Risner Fitness & Sports Center at Kadena Air Base for the first time.

While the degree of difficulty over the two tournament weekends can be challenging, coaches insist that they like both tournaments for what their teams and players can take with them in preparing for next month’s Far East tournaments.

“These are two very important weeks,” Kadena girls coach Willie Ware said. “They show us where we are and what we need to work on for Far East.”

In the three-day MLK, the smaller high school players got to see what it’s like playing against bigger, more physical adult teams.

Japanese players can’t match Americans’ size, so they combat it with speed, quickness, defensive pressure, ball movement and perimeter shooting; Kadena’s and Kubasaki’s teams see more three-point goals shot by Japanese than by any other teams.

“They don’t slow down at all,” Ware said. “They’re so much quicker. Their ball movement is so good. That will help us prepare for working on defense in practice.”

Then there’s getting used to playing tournament ball, not just one game a day, but as many as three, said Jon Fick, coach of two-time Far East Division I Tournament champion Kubasaki boys.

“You get three to five games against quality teams,” Fick said of the Friendship Tournament, now in its seventh year.

“Playing two games, sometimes three in a day, is a true tournament atmosphere. One game is over, you have to flush it and get ready for your next opponent immediately. That’s good, especially for a young team.”

The tournament is co-sponsored by the U.S. Consulate on Okinawa, DODDS Okinawa and the Okinawa Basketball Association.

The event comes just two days after mid-school year semester exams end, and is one of a handful of events highlighting the last week of the semester. Among them:

¬¬-- Seoul American’s basketball teams hit the road to Daegu on Friday, hoping to slow a pair of Warriors teams that are a combined 16-2 in league play. The Falcons on Saturday visit Taejon Christian International School.

¬¬-- DODDS Kanto wrestling teams gather at Zama American for a tri-dual on Friday, followed on Saturday by all DODDS Japan schools in the league’s individual freestyle finals.