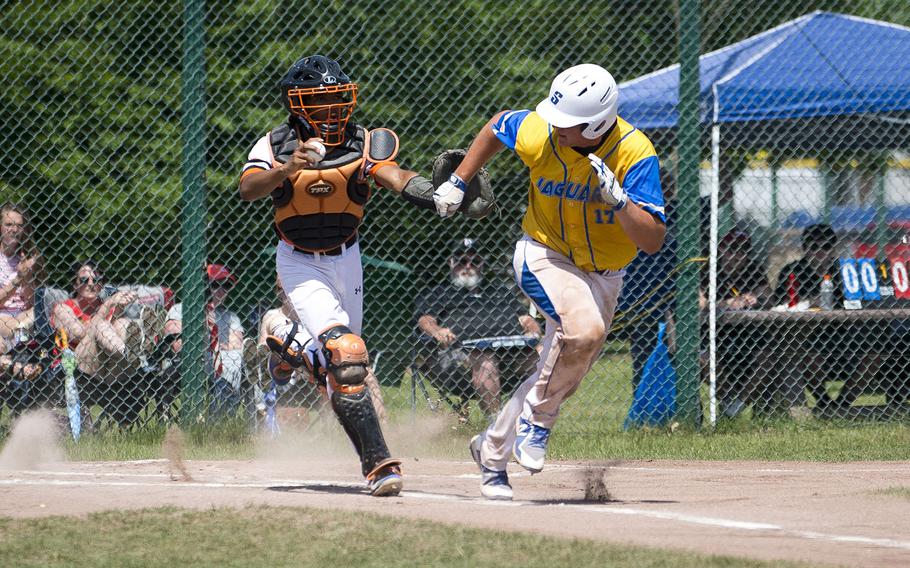 Sigonella's Alex Ogletree, right, runs to first with Spangdhalem's Deon Montgomery close behind during the DODEA-Europe Division II/III baseball championship at Ramstein Air Base, Germany, on Saturday, May 26, 2018. (Michael B. Keller/Stars and Stripes)

Other times, they come awfully close.

It’s hard to craft a narrative depicting the performance of Sigonella pitcher Alex Ogletree in the 2018 DODEA-Europe Division II/III baseball championship game that illustrates his dominance better than his unadorned pitching line: seven innings, zero runs, three hits and 16 strikeouts. Topped off, of course, with a second straight European championship.

“We didn’t use him much through the tournament so he could have this moment,” Sigonella coach Matt McKown said.

Ogletree had more than a few such moments during a dominant senior season that earned him recognition as Stars and Stripes baseball Athlete of the Year.

There were moments of drama and intrigue in the European championship game, an eventual 1-0 win for Sigonella. Not every inning was clean. Spangdahlem runners reached third base and tiptoed along the line towards home plate. Sigonella’s response to all this stress bordered on the serene, so confident were the Jaguars in the pitcher to whom they’d entrusted their season.

“We just became friends from the start,” Carter said. “Just built a really trustworthy relationship with each other.”

Ogletree reciprocated the trust his team placed in him, attributing his championship-game gem to “coaching and catching” along with the Jaguars’ dependable defense.

“As long as we threw strikes I knew the defense behind me would back me up. I know that all the stuff that we put it in practice would kind of pick itself up and tie in to what we were doing here,” Ogletree said. “I’m just glad I was able to go out and do it then and knock it out.”

With everything set up for a perfect end to his high school career, Ogletree made sure that’s how it played out with one of the most dominant pitching performances in DODEA-Europe baseball tournament history.

In DODEA-Europe baseball this year, there was no player bigger than Ogletree.