Not Far East, but not bad: Baseball, softball get expanded competition 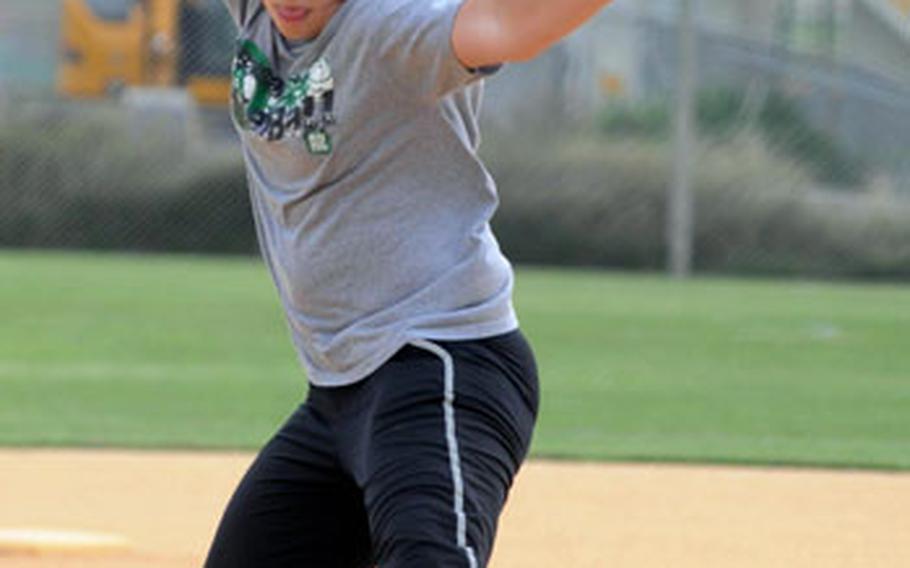 Kubasaki senior Carrie Thompson-Davis and her Dragons teammates will travel to Naval Air Facility Atsugi to play in the seven-team DODDS-Japan softball tournament. While not a true Far East, Thompson-Davis calls it “close” to a Far East. (Dave Ornauer/Stars and Stripes)

For four seasons, he&#8217;s toiled as a pitcher/infielder for Kubasaki&#8217;s baseball team. While other sports have Far East championship tournaments, such is not the case for baseball or softball.

OK, so they&#8217;re not true Far Easts. But this weekend&#8217;s DODDS-Japan softball and next month&#8217;s Kanto Plain Association of Secondary Schools baseball tournaments, both hosted by Zama American, offer the "next best thing," Smiley said.

"At least we get to do something, face other teams," Smiley said of the Kanto tournament. There, Kubasaki and Seoul will on May 15-16 face eight Japan-based teams, four of them DODDS-Japan, at Camp Zama and Naval Air Facility Atsugi.

"This has been a long time coming," Kadena softball coach Jesse Costa said of the DODDS-Japan tourney, with seven teams competing Friday and Saturday at Atsugi. "We&#8217;ve been trying to get off the island a long time. It&#8217;ll be nice to play somebody besides Kubasaki."

Until this year, baseball and softball teams could not travel to non-DODDS-Pacific-sponsored events such as those tournaments since they involved missing a day of school. That changed thanks to a decision made last spring allowing one missed day of school per season per team.

"We&#8217;re fortunate to get that one day off," Kubasaki baseball coach Randy Toor said.

Also opening the door for a softball tournament was Japan converting last spring from slowpitch to fastpitch. That brought DODDS-Japan in line with Okinawa and Korea, which have played fastpitch since 2005.

"I was excited when [Japan] went to fastpitch. I was hoping this year we could all get together and do something," Kubasaki pitcher Carrie Thompson-Davis said.

As Far East tournaments do, the DODDS-Japan softball event is serving as a "motivator" for Okinawa&#8217;s teams, Kadena junior right-hander Mary Schweers said.

"It has a lot to do with representing Kadena softball. We want to be successful off-island. We want to bring our best game," Schweers said.

It took a lot of work, virtually up until the first pitch, to get a DODDS-Japan softball tournament including Okinawa teams off the ground, organizer and Zama athletic director Ed Fogell said.

Initially, some coaches didn&#8217;t like the idea of giving up their league championship tournament, but soon warmed to the idea of something bigger, Fogell and DODDS-Japan coaches said.

"It came as a surprise to us," said coach Danel MacWhyte of defending DODDS-Japan champion Nile C. Kinnick, adding that both a DODDS-Japan and invitational tournament "could have happened. We&#8217;re past that now. We&#8217;re looking forward to it."

One issue was the softball tournament format. Would it be a straight seven-team double-elimination tournament? Or would it be a double-bracket event with DODDS-Japan teams in one bracket and Kadena and Kubasaki playing losing teams in a consolation bracket? And could an Okinawa team ultimately be declared the winner?

That question was answered during Tuesday&#8217;s DODDS-Japan athletic directors&#8217; meeting &#8212; all teams are eligible to win the title.

"It&#8217;s kind of tricky," Fogell said, adding that similar questions have to be answered prior to the Kanto baseball tournament. "We&#8217;ll have 10 teams for that. Even if it is a (Kanto) tournament, what if Seoul wins it? It&#8217;ll be tricky, but when we get it done, it will be worth it."

The bottom line is, all the teams in each tournament get more games against opponents they don&#8217;t normally see.

"We&#8217;re just looking for some games," said Kubasaki softball coach Gerald McKeown, adding that he was fine with either format. "Just having the two teams on (Okinawa) gets kind of boring."

Ideally, Fogell said, "you&#8217;d have a league tournament, then an invitational. One of the problems with softball was it&#8217;s a short season this year. It wasn&#8217;t a perfect schedule. We had to do a lot of wheeling and dealing. Next year, we should have a good grip on things."