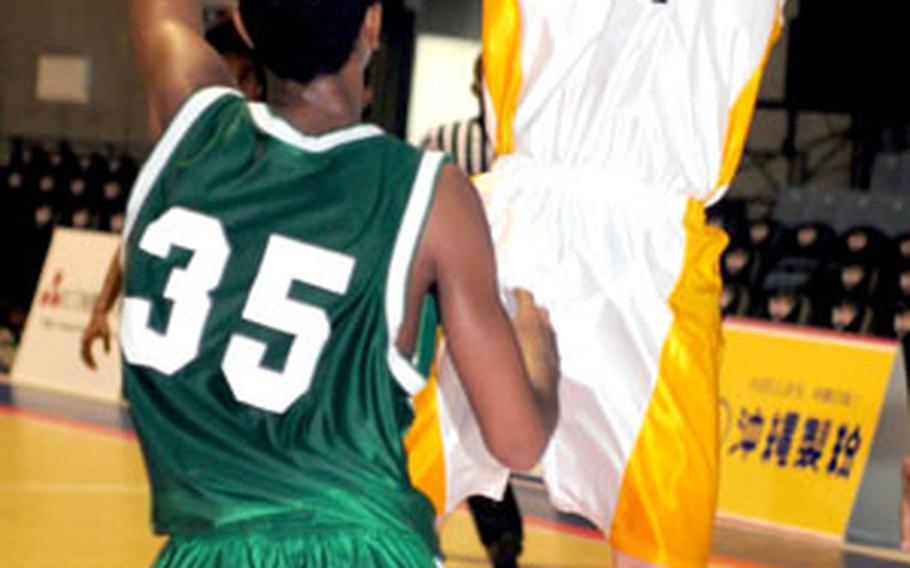 Kadena senior forward Stanley Schrock puts up a shot over Kai Yamaguchi of Kubasaki on Sunday. Schrock and the Panthers won their third game in as many tries just one weekend after Schrock quarterbacked Kadena to the Far East Class AA football title. (Dave Ornauer / S&S)

KADENA AIR BASE, Okinawa &#8212; It goes with the territory, coaches and players say, the quick transition from fall to winter sports. To some it seems to take place with the blink of an eye and begs the question: Is there enough time between seasons?

On Nov. 14, DeEric Harvin and Stanley Schrock quarterbacked Yokota and Kadena to victory in the Far East Class AA football playoffs. Just six days later, they and a handful of their gridiron teammates suited up to play season-opening basketball games.

"It would be nice to have some time off my feet to recuperate &#8212; and not just me but five or six other players," Harvin said after Yokota got swept at Edgren. He played on two sore ankles and two sore shoulders from football.

Aside from dings and bruises, players need time to adjust from one sport to another, Yokota junior Jordan Herrera said.

"You have to get used to the fundamentals, get the handwork right, get the footwork right," he said.

Football and basketball conditioning also differ, Kadena sophomore Corey Hankerson said. "Running up and down the court, you have to have more stamina and get into a basketball rhythm," he said.

Such transition isn&#8217;t limited to the athletes.

"Everybody needs a break," said Steve Boyd, who coached Seoul American to its second straight Far East Class AA cross-country title on Nov. 10 and then began basketball tryouts on Nov. 16.

"You&#8217;re backed right to the door of the winter sports season. Most coaches coach more than one sport a year. Coaches need time to transition from one sport to another. We need the break."

Not everyone shared those viewpoints, however. Even Hankerson, who, while wanting something of a break, also said he doesn&#8217;t want to go stale. "I don&#8217;t want to get out of shape (or) get bored at home without a sport to do," he said.

Others said they&#8217;d just as soon get on with business.

"Would a break be nice? Absolutely. But the guys who came out of football were tired, but they were ready to go," Kadena boys basketball coach Robert Bliss said. "I think it works out just fine."

"I want some games," Kubasaki girls volleyball and basketball senior star Gabby Falco said. "I don&#8217;t need the break. Who needs the break? This is what I do: sports."

National Federation of State High School Association rules mandate 10 practices before a team plays a game. With the schedule as it is, "most times we don&#8217;t even get that," Boyd said; his first game was Wednesday, after his Falcons&#8217; seventh full practice as a team.

Boyd and others suggested a "dead week" immediately after the fall season, so players can rest up from injuries, make up school work and coaches can transition from one season to the next. "We need leadership to stand up and say this," Boyd said.

Hobbs said he sees little wrong with holding limited practices, giving athletes enough time to visit teachers and make up missed work. But he does agree that playing games a week after fall season ends is wrong.

"The 20th is a bit early, no matter how you figure it," Hobbs said, adding that he plans to "get more involved" with regular-season scheduling. "That&#8217;s too early, and I&#8217;ll step in to ensure that&#8217;s dealt with in a correct way. I might seriously have to look at saying no games can be scheduled until a certain date."

But in many cases, the schedule has no wiggle room, especially in Japan and Korea, where the leagues have grown by 25 to 33 percent the past few years, creating what one Korean-American Interscholastic Activities Conference official calls a scheduling "nightmare."

International schools take different Christmas breaks than their DODEA counterparts, some lasting as long as three weeks. Then there are DODEA exam weeks, SAT Saturdays and other so-called "blackout" dates.

KAIAC added two schools to Division I, giving it eight. Prior to 2005, league play began in December; this season, it began Nov. 18.

Japan&#8217;s Tokyo-area schools play full schedules against DODEA Japan and Kanto Plain teams and added games against Yokohama and St. Maur. Prior to 2000, Kanto play didn&#8217;t begin until after the New Year; this season, it began with the games Nov. 20.

"We have to look at the present schedule and see what tweaks we need to make," Hobbs said, adding that he doesn&#8217;t foresee the need for "major adjustments."

Whatever adjustments are made, Boyd hopes they include a specific period needed for the injuries to heal, the missed assignments to get done and for students to "get back into the groove of school.