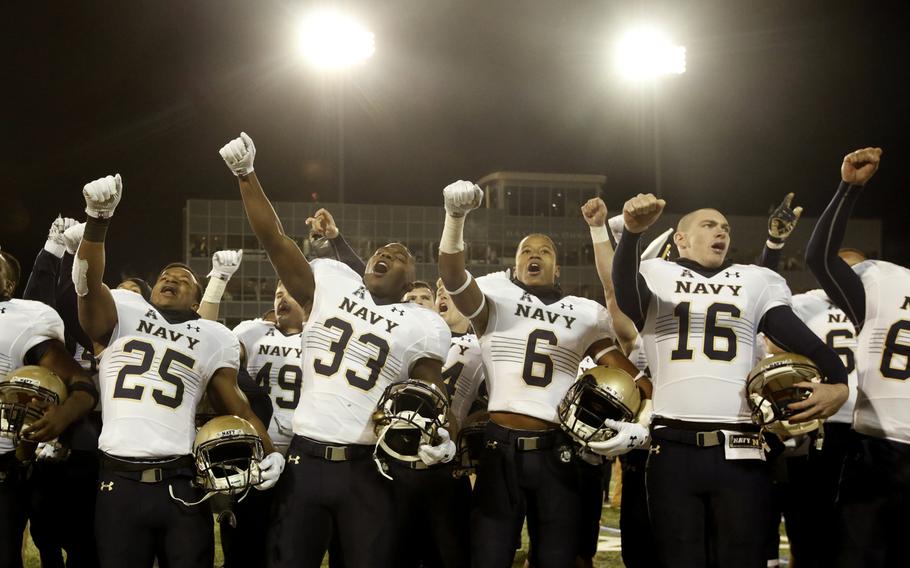 TULSA, Okla. — Now that No. 19 Navy has dispatched Tulsa in dominating fashion, the Midshipmen can focus on bigger goals.

Quarterback Keenan Reynolds ran for 81 yards and a touchdown while directing a Navy offense that rolled up 512 yards on the ground and the Midshipmen beat Tulsa 44-21 on Saturday night.

Tulsa (5-6, 2-5) has a final chance to become bowl eligible Friday at Tulane.

"Those guys have scored a ton of points on a lot of good teams," said Navy coach Ken Niumatalolo. "I thought our defense played great. We held a very high-powered offensive team down."

Toneo Gulley ran 70 yards for a touchdown in the first quarter, the longest run by a Navy runner this season, to give the Midshipmen a 7-0 lead.

They would never trail as six different offensive players took turns scoring in the rout.

"Hats off to Navy," said Tulsa coach Phillip Montgomery. "They are a very talented football team, very difficult to prepare for. I thought our defense played very well early, it's just hard to keep them contained.

"It's tough because everybody talks about Navy's offense and they are extremely good. But you look at them defensively and they are very talented. Offensively, we just never got in any real rhythm," he said.

Reynolds threw a 39-yard strike to Jamir Tillman then scored on a 1-yard run to make it 21-0 before Tulsa finally got on the board.

After closing to 21-7 on a 1-yard plunge by Zack Langer, Tulsa stopped Navy. But instead of running out the clock, Tulsa rushed to get off a play on third-and-14 from its own 18. A bad snap rolled past Tulsa quarterback Dane Evans, who tried unsuccessfully to pick up the ball and it was knocked through the end zone for a safety to make it 23-7 at halftime.

After Dishan Romine returned the opening kickoff of the second half 90 yards to the Tulsa 8, Demond Brown ran it in from four yards out to put Navy ahead 30-7 just 55 seconds into the second half.

It was no surprise that Navy chewed up the Golden Hurricane's 115th-ranked run defense. The question was whether Tulsa's ninth-ranked offense would be able to keep pace against the AAC's best defense.

Evans threw for 279 yards but was sacked four times. Tulsa went three-and-out on its first two possessions and receiver Keyarris Garrett was stripped of the ball after a first-down reception on Tulsa's third try. It finally got moving late in the second quarter.

After Langer's second touchdown cut the lead to 30-14, Navy reeled off consecutive touchdowns, the second on a 24-yard reverse run by receiver Brandon Colon, to put the game out of reach at 44-14 early in the fourth quarter.

Tulsa was limited to 356 yards, well below the Golden Hurricane offense's average of 526.