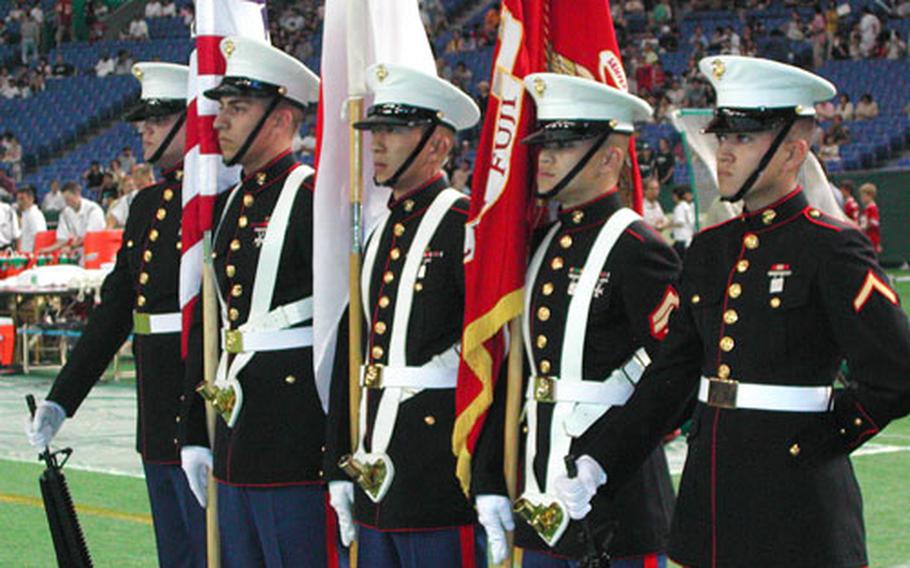 TOKYO &#8212; While the Buccaneers kept piling on points in Saturday&#8217;s American Bowl, Brian Watkins kept up a steady stream of cheers.

In the upper-level stands of the Tokyo Dome stood the 21-year-old petty officer second class assigned to the amphibious command ship USS Blue Ridge. He cheered throughout while waving a large garnet and claret-colored flag adorned with Tampa Bay&#8217;s swashbuckler mascot.

Watkins was part of 43,601 at the 12th NFL preseason American Bowl staged in Japan since 1989. Roughly a third of the crowd were Americans, with close to 2,000 GIs, DOD civilians or family members.

Louis Carneskie, a 28-year-old petty officer third class, took the bullet train from Sasebo Naval Base, some 700 miles southwest of Tokyo, to cheer the Bucs, who routed the New York Jets 30-14.

Things didn&#8217;t look good for the Bucs early. They fell behind 7-0 on LaMont Jordan&#8217;s 1-yard first-quarter TD run, and a group of Jets fans from the Marine base at Camp Fuji couldn&#8217;t have been happier.

While the Jets clung to a 7-6 lead after a pair of Buccaneers field goals, Merizalde was already making post-game plans: &#8220;We&#8217;ll go out and celebrate the Jets&#8217; victory in Roppongi after the game tonight. They [Jets] are the real champions, we know that.&#8221;

Up in &#8220;nosebleed&#8221; territory, their fellow Marines sat in a section adorned with a Camp Fuji flag. A couple of them said the trip to the Dome was worth it regardless of where they were seated.

As the Bucs&#8217; defense smothered the Jets and the offense piled up points, some New York fans found their plans for the evening going up in smoke.

Such wasn&#8217;t the case for Will Badillo, a Zama American High School junior who accompanied a tour of 25 from Camp Zama&#8217;s youth center and marveled at the Bucs&#8217; defense, which includes star lineman Warren Sapp and linebacker Derrick Brooks.

Besides the game, the entertainment included a halftime performance by rock group Cheap Trick.