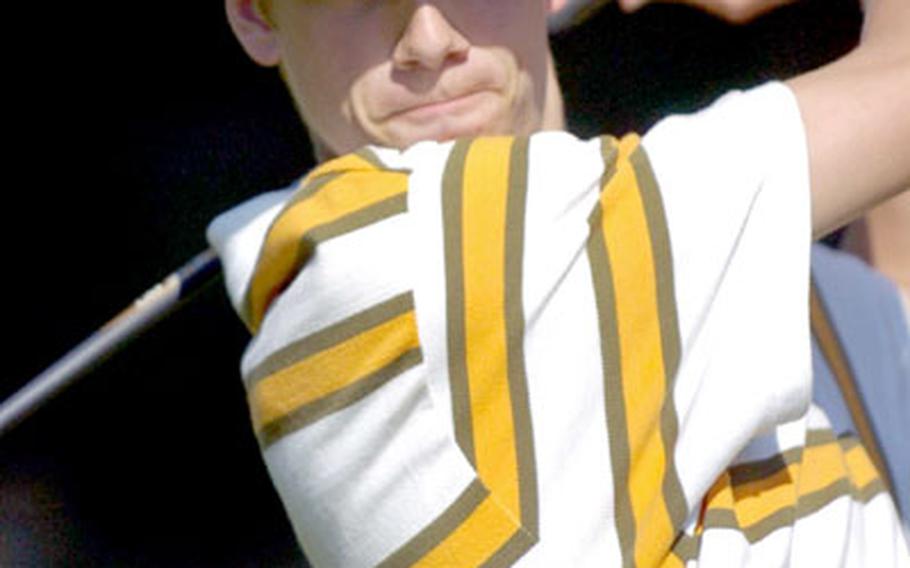 HEIDELBERG, Germany &#8212; Two newcomers established themselves as contenders for next month&#8217;s individual high school golf crowns by posting the top scores in a five-school meet at the Heidelberg Golf Club Friday.

Nick Dougan, a Baumholder freshman, topped the boys field with 45 points under the Stableford scoring system. Sonia Gonzalez, a junior transfer at SHAPE, blew away the girls field with 20 points.

Even so, Dougan, who has played the DODDS schedule the past two years as a middle school exhibition golfer, edged Heidelberg&#8217;s Josh Ecenrode and Ramstein veteran Ryan Bachman by two points to post his career-best Stableford score and his first varsity victory.

Garcia, a Spaniard who transferred to SHAPE from Madrid, indicated through a translator that she was slightly disappointed with her round.

If nothing was lost in translation, Garcia&#8217;s assessment of her abilities marks her as a player to watch in the European championships in Wiesbaden. That event is scheduled for Rheinblick Golf Club Oct. 13-14.

Dougan, who said he&#8217;s been playing golf since he was 5, is also likely to find himself in the hunt there, even though Rheinblick&#8217;s hilltop layout isn&#8217;t to his liking.

Dougan&#8217;s 45, accumulated from a Stableford table that awards one point for double-bogey, two for bogey, three for par, four for birdie and six for eagle or ace, accounted for all but 13 of Baumholder&#8217;s points. Team scores are determined by adding the Stableford points of the top four male golfers from each school.

Ramstein took the boys team title with 154 points. Bachman led the way with 43; Matt Wiederholt had 40, Chris Hustead 37 and Michael Haas 34. Heidelberg was second with 146.

Garcia led SHAPE to 24 points and the easy girls victory; Ramstein was second with 14. Girls scoring is combined Stableford points of the top girls &#8212; at least two &#8212; from each school.

Heidelberg pentagonalScoring was modified Stableford: one point for double-bogey, two for bogey, three for par, four for birdie and six for eagle or ace. Team scoring is combined Stableford points of top four boys and top girls (at least two) from each school. Ties are broken by superior back-nine total.