New champions are likely in both divisions 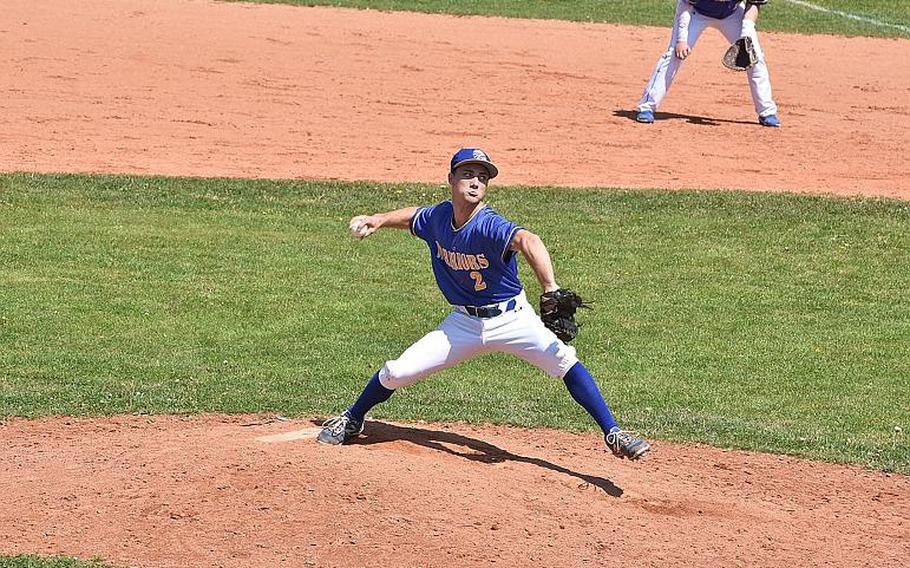 Wiesbaden ace Austin Deckinga struck out seven batters and allowed just one hit in the Warriors' 11-1 victory over Naples on Friday, April 19, 2019. (Kent Harris/Stars and Stripes)

The two defending champions in this week’s DODEA-Europe baseball championship tournaments each enter the bracket with sub-.500 records, offering plenty cause for optimism for the fields of Division I and II/III challengers.

The three-day tournaments run Thursday through Saturday at sites around the Kaiserslautern Military Community.

Division I The Ramstein Royals’ undefeated spring has had the look of vintage seasons from the program’s five-year DODEA-Europe dynasty. The only difference is that they’re not the reigning champions.

The Lakenheath Lancers knocked Ramstein off its half-decade pedestal in last year’s tournament, ousting the Royals in the semifinals and going on to edge Kaiserslautern for the championship. That final was the first Division I title game to not feature at least one of Ramstein and Stuttgart, and the Lancers became the first team other than those twin titans to claim the division’s championship.

While Lakenheath defied the odds to pull off last year’s breakthrough title run, it faces even longer odds this time. The rebuilding Lancers enter the tournament with a 1-7 record.

Instead, it’s the Royals who enter as the tournament’s team to beat and a clubhouse favorite to restart their stalled reign. Ramstein completed an undefeated regular season Saturday with a sweep of homestanding Kaiserslautern.

But the Royals aren’t the prohibitive favorites they once were. Ramstein was tested immediately in March by old rival Stuttgart, winning the season-opening doubleheader by precarious 1-0 and 5-4 margins. And the Royals never saw Wiesbaden, a perennial contender enjoying a particularly strong spring, as their May 4 matchup was scuttled by inclement weather.

Beyond those obvious threats, Ramstein will have to look out for a Lakenheath-style attack from dangerous lower seeds like Naples, SHAPE, Vilseck and Vicenza, each of which boasts at least one signature regular-season win on which to pin its tournament hopes.

Division II/III This year’s small-school baseball bracket is as wide-open as any in recent memory.

Neither defending champion Sigonella or returning runner-up Spangdahlem, who staged a 1-0 instant classic in last year’s final, are clear favorites to return to the title game, though both are certainly capable.

The Hohenfels Tigers enter with the best divisional record of the tournament’s evenly matched field, while 2018 semifinalists Rota and Aviano also enjoyed solid regular seasons. Only Ansbach failed to hand a divisional rival a loss this spring, but that too could easily happen over the course of a highly unpredictable three days.