Navy QB Tago Smith out for season with torn ACL 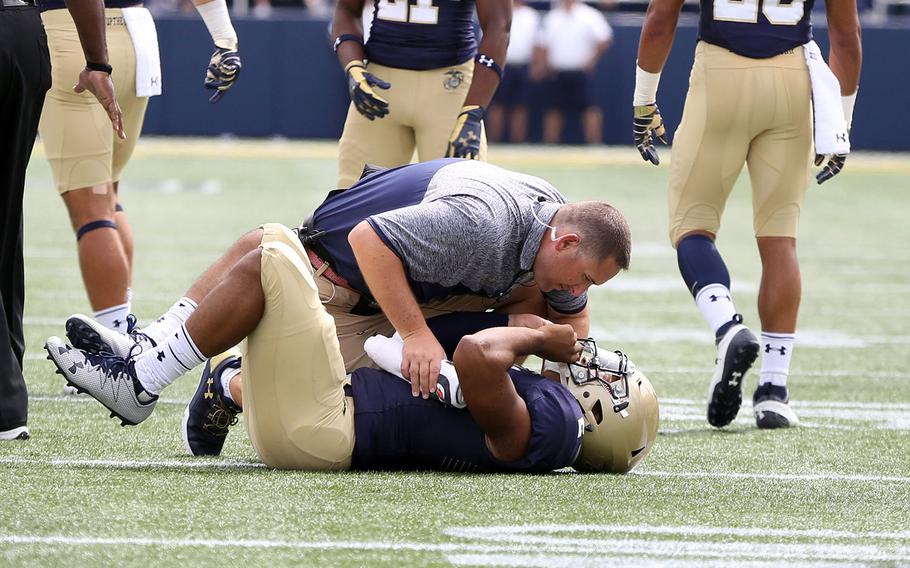 Navy's Tago Smith #2 is tended to by a trainer after suffering an injury against Fordham during an NCAA college football game on Saturday, Sept. 3, 2016, in Annapolis, Md. (Gregory Payan/Associated Press)

ANNAPOLIS, Md. — Tago Smith, who replaced Keenan Reynolds as Navy's starting quarterback, will miss the rest of the season with a knee injury.

Smith tore his right ACL in Navy's 52-16 victory over Fordham on Saturday.

The injury occurred on the third play of the second quarter during a 22-yard run by Smith. He finished the game with 97 yards rushing and two touchdowns on 10 carries and completed his only pass for 45 yards.

Smith, a senior, was elevated to the starting position after Reynolds enjoyed a record-setting run during his four years at the school.

Senior Will Worth now takes over at quarterback for Navy. Sophomore Zach Abey is the backup and freshman Malcolm Perry is third on the depth chart.

Worth rushed for 22 yards against Fordham and completed all three of his passes for 78 yards.