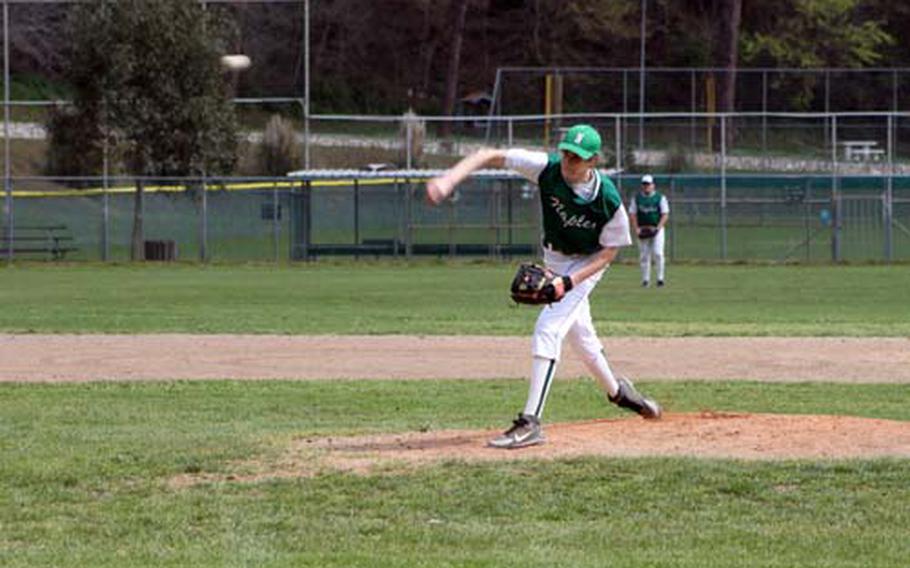 Naples’ Logan Porchie delivers during his no-hit victory over Vicenza on April 3. Porchie, a strong switch hitter as well as an overpowering hurler, could have a college career as a middle infielder or pitcher, according to his high school coach, Duke Marlow. (Courtesy of Duke Marlow, DODDS-Europ)

To hear Naples coach Duke Marlow tell it, senior Logan Porchie has a promising baseball future wherever he plays.

"He has great command on the mound," Marlow said by telephone Tuesday. "He can throw his breaking ball early in the count and has a great circle-change."

That breaking ball&#8217;s not just any old high-school bender. Marlow calls it "a filthy, hard-snapping hammer."

Porchie, 17, views his "filthy" curveball as an old friend. "I can spot my fastball," he said, "and I can rely on my curveball when I need it."

Marlow, however, thinks Porchie, who was victimized by unearned runs in a 4-3 loss to Vicenza the day before his no-hitter, might not have to rely on his hook to succeed.

"I think Logan is one of the top five guys I&#8217;ve ever coached," said Marlow, who coached in Florida before he landed in Naples. "I&#8217;m not sure what the (college) Division I teams will decide about his pitching, but he hits the ball well. I see him as a middle infielder on the next level."

Hitting the ball well might be an understatement. Porchie, who has yet to bat left-handed in four games this season, is hitting .650, according to Marlow.

Porchie said he had always been a left-handed batter until he arrived in Naples as a seventh-grader. There, he decided to check out the view from the other side of the plate.

"I think I was always a natural right-handed batter," said Porchie, voted to the All-Europe second team last year in the first official season of DODDS-Europe baseball, "but my dad started me out hitting left-handed."

He&#8217;s more than down with the notion of playing anywhere a college team will let him.

"I think so," Porchie said when asked whether he feels ready for the next level, "but it&#8217;ll be a big change."

Even bigger than the change in baseball&#8217;s status in DODDS-Europe over Porchie&#8217;s last two years of high school.

"It kind of hurt not having high-school baseball in ninth and 10th grade," Porchie said. "We had kind of an MWR program with Coach (Jim) Hall and Coach Marlow, but we only played about nine, 10 games a year."

Not much chance for college scouts to check out this overseas prospect.

Although Marlow thinks the ace of his staff is a can&#8217;t-miss NCAA Division II prospect, Porchie said he&#8217;ll be attending the University of South Florida this fall on a Navy ROTC scholarship and will attempt to walk on for the Division I Bulls.

In the meantime, there&#8217;s a bit of unfinished business for Naples, which is 3-1 going into this weekend&#8217;s four-school round-robin in Naples. That&#8217;s the European D-II tournament.

"Last year, we came in third," said Porchie, an honor student who also plays football and wrestles for the Wildcats but prefers baseball "by far" to either of those sports. "We want a chance to get back at (D-II champ) Bitburg. They beat us 1-0 last year."

Porchie and his Wildcats will have to wait until the May 27-29 D-II tournament at Ramstein for possible revenge against the Barons. But they&#8217;re willing to go the distance to get one.

Game of the WeekSoftball showdown at NaplesWhen: Friday-Saturday, 9 a.m.-4:30 p.m.Where: Carney Park, NaplesWhat&#8217;s at stake: Regional standings leadThe four Southern Region softball teams &#8212; Aviano, Naples, Vicenza and Sigonella &#8212; all meet at the home of the defending European Division II champions to resume their seasons after DODDS-Europe&#8217;s spring break.The south Italy schools, Naples and Sigonella, will play two games each against Aviano and Vicenza in the final regular-season matchups between the North and South.While playing back-to-back doubleheaders would seem to present pitching problems, Sigonella&#8217;s Amy Driscoll says that&#8217;s far from the case for her Lady Jaguars."&#8230; I like that we are playing four games a weekend," she e-mailed Tuesday. "It definitely gives us more experience and makes the long trip more worthwhile. We have three strong pitchers and a backup, so it really isn&#8217;t a problem for us with pitching."There&#8217;s also a down-the-road benefit of the full slate, Driscoll added.

"It does help get us ready for Europeans," she wrote, "in which we will play two games a day."