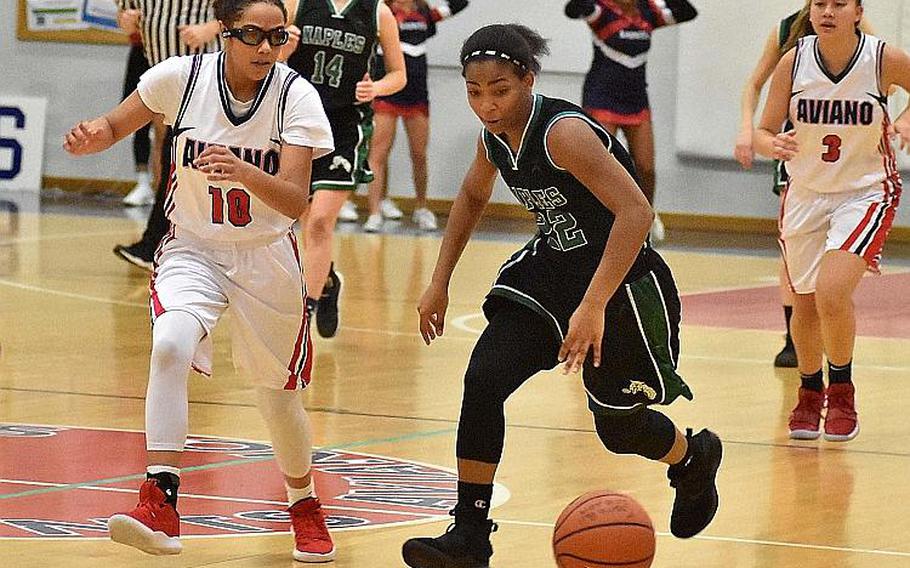 Naples' Mia Rawlins and Aviano's Alyssa Hardy chase the ball down the court in the Wildcats' 58-29 victory over the Saints on Friday, Feb. 1, 2019. (Kent Harris/Stars and Stripes)

After an impressive run to the 2018 DODEA-Europe Division I girls basketball championship game, the Naples Wildcats won’t be sneaking up on anyone at the upcoming 2019 tournament.

But the Wildcats have been keeping a rather low profile this season.

Naples enters the European tournament seeded in the middle of the nine-school pack, owing to its 3-2 divisional record. But the Wildcats’ two divisional losses - a 40-27 loss to Stuttgart in a rematch of last year’s title game, and an 18-16 decision to Vilseck - happened well over two months ago, and the Wildcats have performed well ever since. They remain a threat in the Division I bracket, regardless of record or seed.

“We have been passing, working the ball around better,” Naples coach Tim Smith said. “If we can pressure and run we can be very successful.”

Naples will arrive in Wiesbaden in a curious predicament, both well-rested and weary all at once.

The team is idle for the final weekend of the regular season, having completed its regular-season schedule Feb. 8-9 with an overwhelming sweep of previously unbeaten Sigonella, the reigning Division III champion. That gives the Wildcats well more than a week between their regular-season finale and Feb. 20 tournament opener.

Smith plans to put that time to good use with “skill work and conditioning,” as well as extra attention to situational strategies like inbounds plays.

That sounds like the recipe for a rejuvenated, prepared team. But much of that decompression will be reversed by the epic road trip the Wildcats will require just to reach the tournament’s German locale.

“You have to put the long bus trip out of your mind and mentally be ready to play,” Smith said.

The Wildcat boys enter as similar dark-horse title contenders, counting victories over Lakenheath, Stuttgart and Vicenza in their 4-1 divisional mark.