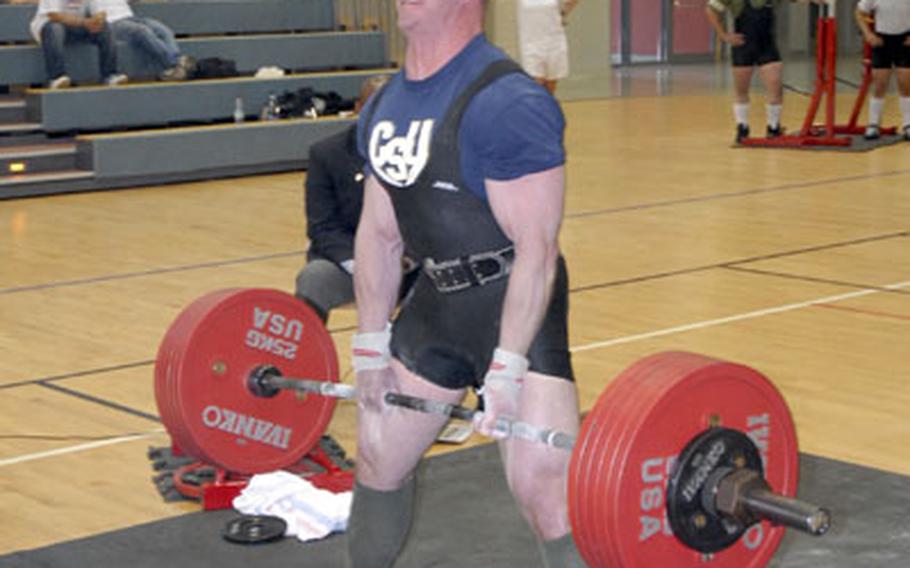 Jason Watson, a soldier from Vilseck, Germany, dead lifts more than 600 pounds during the U.S. Forces Europe Powerlifting Championships at Warner Barracks in Bamberg, Germany, on Saturday. Watson, the lone competitor in his weight class, lifted a total of 1,664.74 pounds (Mark St.Clair / S&S)

He and the other two sailors from Naples &#8212; including Pamela Arvelo Marrero, the only woman competing &#8212; also took first place in the team competition.

&#8220;It&#8217;s a good meet. Obviously, I wish there was more competitors, but you have to remember there are guys in Iraq and Afghanistan and other places,&#8221; Allison said.

Butler also traveled the farthest to compete: the soldier&#8217;s leadership at Camp Arifjan, Kuwait, told him he had to win in order to go.

Butler, who is stationed in Germany when not deployed, also lifts for team SG Randersacker in the German Bundesliga, and has since 2002.

Butler, who spent most of his time between lifts pumping himself up via iPod and smelling salts, said he was impressed with the way the competition was handled.

&#8220;It was done very professionally ... the only things that could have made it better would have been more lifters, more fans and music.&#8221;

Organizers also seemed pleased. &#8220;We have a wide variety of people (here). It definitely reached out and made this a joint event, with different services and different locations participating,&#8221; said Sylvia Martin, director of sports and fitness programs on Warner Barracks.