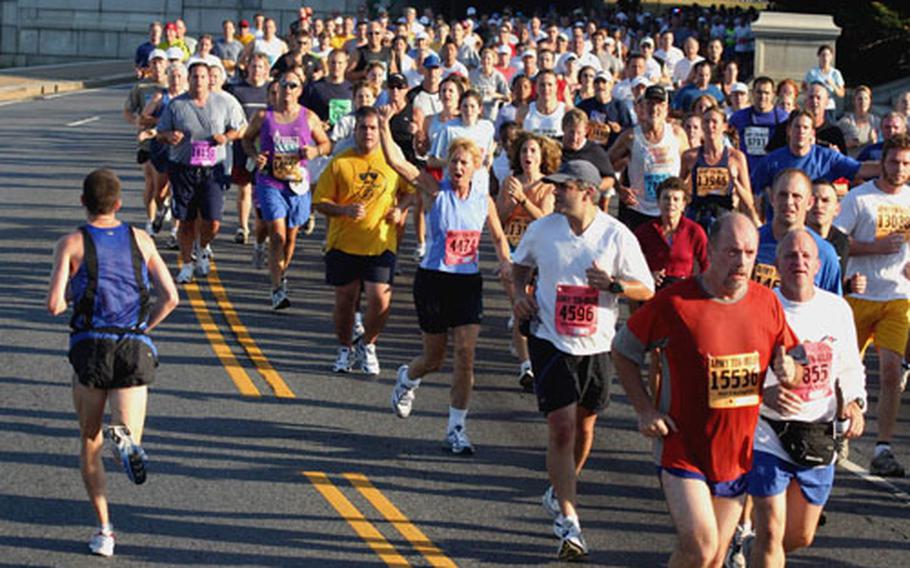 Runners back in the pack cheer on leader Chris Graff, left, going in the opposite direction in the later stages of Sunday’s Army 10 Miler. Graff was first across the line in what turned out to be an unofficial race. (Joe Gromelski / S&S)

Police later determined the package was harmless, but because of the route change, the race is considered a fun-run with no official results, officials said.

Some runners expressed disappointment after hearing that the race didn&#8217;t count.

Graff said he knew something was wrong when runners failed to make a turn onto the 14th Street Bridge and he ended up &#8220;running really hard in the wrong direction.&#8221;

Graff seemed ambivalent that his victory was null and void Sunday. He said he estimated his time was 48 minutes flat, which is exactly where he wants it.

Still, no one can debate what Akbar and the other runners accomplished Sunday, she said.

Harting, of the Gold Star Wives of America team, said the fact Sunday&#8217;s race was unofficial didn&#8217;t take away from her mission of honoring her brother&#8217;s memory.

Sgt. 1st Class Toby Angove, of the Pennsylvania National Guard, ran across the finish line Sunday with an American flag protruding from his backpack.

Angove said he displayed the flag to support all of his fellow troops who couldn&#8217;t attend the race.

He said running the race wasn&#8217;t nearly as daunting as what some of his fellow soldiers are going through right now.