Muscle classic: Bodybuilders at Okinawa competition turn from their own worst critic to best salesman 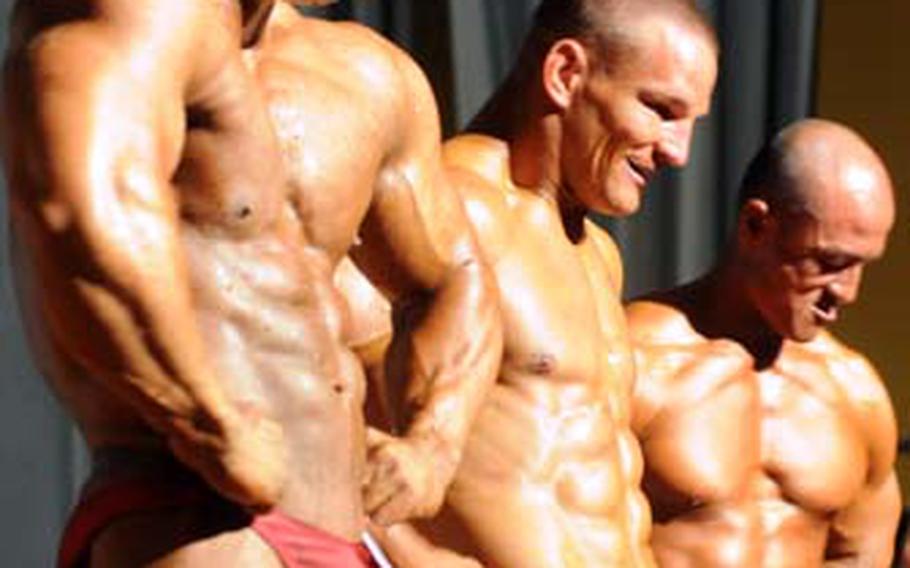 KADENA AIR BASE, Okinawa &#8212; Bodybuilders live a mixed reality. On one hand, they serve as their own worst critic, believing there&#8217;s always room to improve. On the other, they must unabashedly market themselves to the judges, prove that there is absolutely nobody better on stage at that moment.

Sunday&#8217;s event was the first competition for Smilek, a Camp Schwab-based Marine. He has been lifting for five and a half years and said he trained for competition for two years.

All told, 35 entrants competed for two and a half hours before more than 800 people.

The competitors completed their 90-second routines with apparent ease, but that skill, they say, is the result of months of strict dieting and a grueling regimen of weightlifting, stretching and other exercises.

"Every show I do is a culmination of all that training. You&#8217;re on stage for maybe five or 10 minutes, but you&#8217;re training for a year" or longer, said professional trainer Zoa Linsey of Torii Station, who&#8217;s been competing for 10 years and coaching for three. She coached six women and two men who competed in the event.

The show itself is the "glamour part," Linsey said. "The rest of the time is spent in the weight room, hair pinned back, no makeup or tanning lotion and iPod blasting music as you lift."

Not everybody subscribes to that, including Smilek, whose diet went against all conventional bodybuilding wisdom: "Burger King and Subway," he said.

Of those in the weight room, "you know which ones are committed," he said, adding that the hardest part is getting started.

"Make the commitment and be serious about it. We&#8217;re our own worst critics. You never feel like you&#8217;re ready, that there&#8217;s always something else you can do to become better."