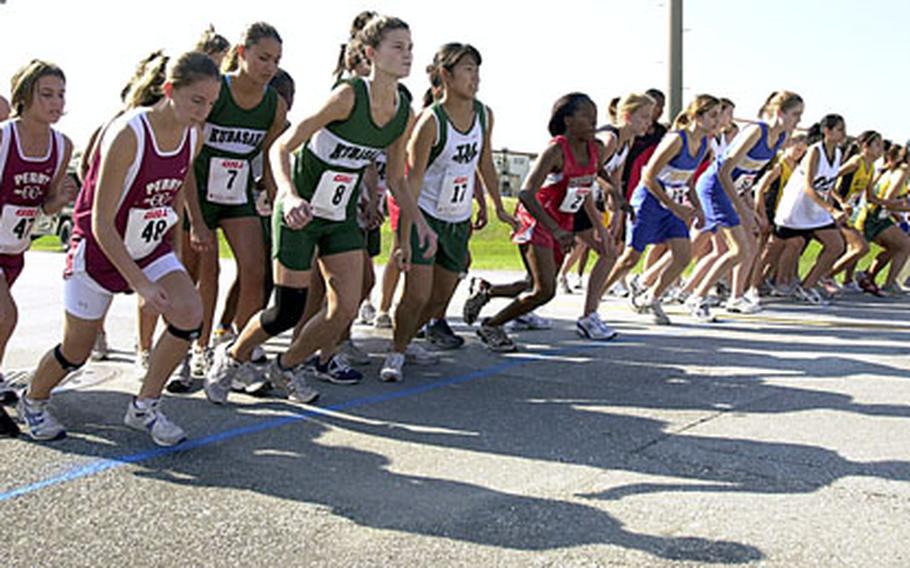 Runners take off across the start line of the girls 3.1 mile indiviual race at the 2006 Far East Cross Country Championship Meet at Camp Hansen on Monday. (Cindy Fisher / S&S)

Runners take off across the start line of the girls 3.1 mile indiviual race at the 2006 Far East Cross Country Championship Meet at Camp Hansen on Monday. (Cindy Fisher / S&S) CAMP HANSEN, Okinawa &#8212; The heat seemed oppressive to Nadine Mulvany, who could have been forgiven had she spent the better part of Monday&#8217;s race looking for the guy who sold the oxygen.

Still, she pressed on. And when she crossed the finish line in Monday&#8217;s 3.1-mile individual Far East High School Cross Country Meet race, she marched into history, along with Matt Coon on the boys&#8217; side.

Never before had runners from Nile C. Kinnick in Japan or Kubasaki on Okinawa won the race until Monday. And the two celebrated their feats, achieved in 80-degree temperatures under a cloudless sky on the road course at Camp Hansen.

&#8220;It feels great,&#8221; Mulvany said after a race in which she took the lead after the first 20 seconds and didn&#8217;t look back. Mulvany crossed the line with a time of 19 minutes, 51 seconds, 43 seconds better than runner-up Michelle Castillo of host Kadena and 1:03 faster than Jade Thrasher of Robert D. Edgren in Japan.

Not realizing how much she was pulling away from Castillo, Mulvany, the reigning Department of Defense Dependents Schools-Japan champion, instead spent much of the time focused on &#8220;how horrible the weather was. I&#8217;m not used to it. It was hard to breathe. But I kept pushing. I didn&#8217;t want to give up until the end.&#8221;

Coming into Monday&#8217;s race, Mulvany said she&#8217;d thought a runner from Kadena, Kubasaki or defending team champion Seoul American would seize the lead and she&#8217;d run on their heels until the end. &#8220;I wasn&#8217;t expecting to lead. Taking the lead surprised me. I thought somebody would catch me.&#8221;

Staying with the pack and making a charge toward the finish was Coon&#8217;s strategy. Like Mulvany a sophomore, Coon pushed in front a couple of times, but was content to lag with the pack, which he said was bunched too tightly and wasn&#8217;t cutting corners sharply.

While Coon made individual history, Kinnick&#8217;s boys made school history by taking first place in the team standings, nudging out 2004 champion and host Kadena 40-41. Coon helped Kubasaki finish third with 59 points. Bailey was optimistic of a strong showing in Tuesday&#8217;s team relay, which would give Kinnick the overall team title &#8212; a first in school history.

Also in solid position for the overall team banner was Kadena, which, despite Mulvany&#8217;s victory, posted a solid girls team victory with 24 points, 18 fewer than Guam High. But coach Tom McKinney, whose Kadena team won the 2004 title, wasn&#8217;t counting on a thing.