More titles up for grabs after ISB pulls out of tennis 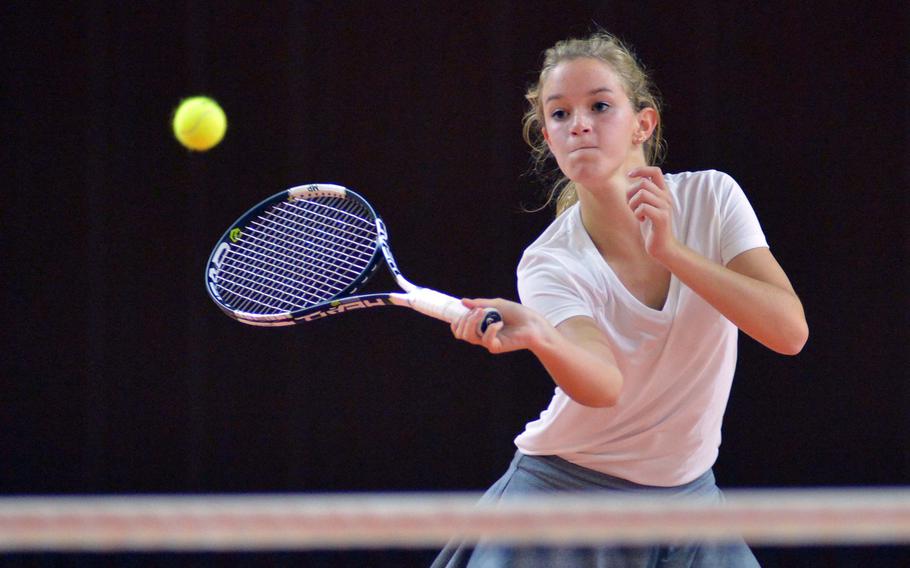 Stuttgart's Kendall Smith returns a shot at the net in her match against Ramstein's Cami Carswell at the DODEA-Europe tennis championships in Hochheim, Germany, Friday, Oct. 28, 2016. Carswell won 4-6, 6-0, 10-6. (Michael Abrams/Stars and Stripes)

The upcoming 2017 DODEA-Europe tennis season is notable not just for the teams that are participating, but for one that isn’t.

International School of Brussels has withdrawn from DODEA-Europe tennis competition, school athletic director Lee Rosky confirmed, along with every other sport with the exception of football.

Rosky said ISB’s goal is for each of the school’s sports teams to play just one competitive season per school year. For tennis, that’s the International Schools Sports Tournaments in the spring. Rosky said the DODEA-Europe fall tennis campaign was ISB’s “second season” in the sport, and added that ISB has “no plan to return” to DODEA-Europe tennis competition in the future.

“It is nothing against DODEA,” Rosky said. “We just need to do what is best for the overall program.”

ISB coach Bernard deConinck said he has “very good memories” of the program’s time in DODEA-Europe.

“It has been nice for our kids to play for so many years,” he said.

Sentiments aside, ISB’s exit creates more opportunity for DODEA-Europe’s remaining tennis hopefuls, as the school was regularly represented in the latter rounds of the European tournament on both the boys and girls sides. Teams across the continent are eager to take advantage of the streamlined power structure.

Stuttgart will present contenders for all four championships. Senior Kendall Smith will vie for the girls singles crown after reaching the singles semifinals a year ago and winning a doubles European title in 2015. Senior stateside import Zach Snow has stepped in as the Panthers’ top solo boys player. Returning seniors Bradley Russell and Hannah Cahill have new partners for runs in boys and girls doubles play, respectively.

While Stuttgart has its top players in place, many of the other larger programs in DODEA-Europe are still making those evaluations as the regular season draws near.

Kaiserslautern is stocked with newcomers, though returning girls Margaret Cayce and Josephine Little lend some stability to the program. Wiesbaden returns five girls from last season and adds freshmen Melissa Pritchett and Charlotte Kordonowy, both of whom bring years of competitive experience to the Warriors.

DODEA-Europe’s Italian contingent, meanwhile, will look to build on a breakthrough 2016 tournament that saw all-Italy matchups for both the boys and girls singles championships. Sigonella, a strong small-school presence in most other sports, reinstates its tennis program this fall after a years-long absence from the ranks. Coach Andrew Caro said the Jaguars have six girls and six boys to fill out the roster, through the squad consists of “mostly beginners.”