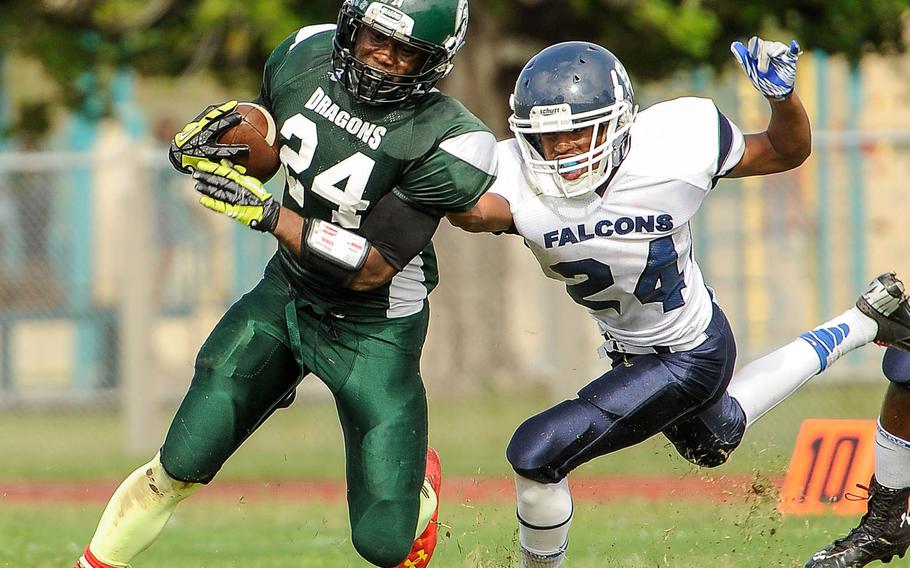 After his famly invested thousands in shuttling Kubasaki Dragons running back Jarrett Mitchell to invitation-only high school football camps, after earning three MVPs in those camps and another at a Diamond-in-the-Rough All-Star game, all he has to show for his effort at this point is a preferred walk-on at Louisville. He could have chosen a smaller college, but "in my mind it's go big or go home." He could have opted to play his senior year in the States, but he said he preferred to finish what he started and that he wanted to "finish as a Dragon." (Adam Fondren/Special to Stars and Stripes)

After his famly invested thousands in shuttling Kubasaki Dragons running back Jarrett Mitchell to invitation-only high school football camps, after earning three MVPs in those camps and another at a Diamond-in-the-Rough All-Star game, all he has to show for his effort at this point is a preferred walk-on at Louisville. He could have chosen a smaller college, but "in my mind it's go big or go home." He could have opted to play his senior year in the States, but he said he preferred to finish what he started and that he wanted to "finish as a Dragon." (Adam Fondren/Special to Stars and Stripes) 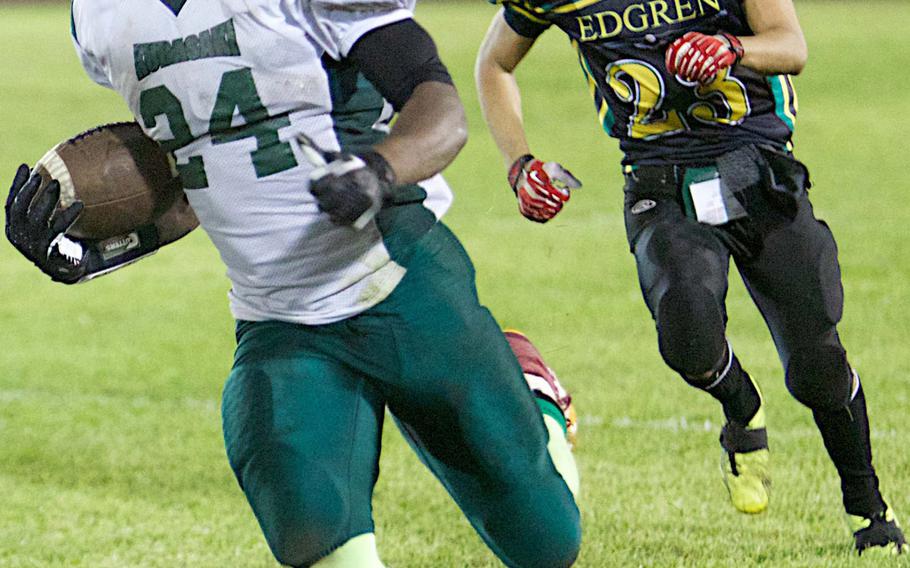 Kubasaki Dragons running back Jarrett Mitchell exits as the Okinawa single-game yardage record holder, with 379 on 14 carries in this game at Robert D. Edgren. He has won one Far East Division I championship and leaves as the school's career rushing leader in the 10-year Far East playoff era, with 3,990 yards on 357 carries. (Sheila Suckart/Special to Stars and Stripes)

It would be understandable if Jarrett Mitchell felt a letdown in the wake of college football’s national signing day three months ago.

Kubasaki’s career rushing leader in the Far East playoff era, who attended invitation-only camps and played in national All-Star games and applied to more than a dozen Division I schools, only reaped one serious offer, as a preferred walk-on at Louisville.

But the senior three-sport star says he feels more determined than disappointed over the lack of attention from big-time programs. He insists he’s more concerned with the long view, and how to provide for himself and a family, whether college involves football or not.

“It’s not about the four-year route, but the 30-year route,” Mitchell said, adding that while football is temporary, education is permanent.

College and pro football “isn’t going to keep you going for 30 years. Having the job that fits me, to take care of myself and my family throughout those years and build on it is what I’m thinking,” he said.

One reason he says he’s considering Louisville is for its sports management program, a career he plans to pursue after college.

Louisville’s coaching staff was on the road doing spring scouting, a sports information official said. And NCAA rules prohibit schools from discussing potential recruits before they’re signed and on the team.

As a preferred walk-on, Mitchell would be assured a spot on the team, but would not receive any financial aid. Former Kadena linemen Gabe and Aaron Ahner also play for Louisville in preferred walk-on status.

Mitchell and his family made the difficult choice of foregoing school in the States to have Mitchell remain overseas, and spent thousands shuttling him to those camps and games, giving him the next-best thing to being in the States.

Mitchell was named running back Most Valuable Player at three National Underclassmen camps, and earned Player of the Game honors at a Diamond-In-The-Rough national All-Star game in December in Florida.

Mitchell exits Kubasaki with 3,990 yards on 357 carries in parts of three seasons, with one Far East Division I title, in 2013, when he ran 149 times for the league’s single-season record 1,840 yards. He set the Okinawa record for yards in a game with 379 – third-best total in Pacific history – on 14 carries in a game Sept. 28 at Robert D. Edgren.

Whoever lands Mitchell, be it Louisville or another school, they’ll be getting “a very determined young man who has good focus on his reasons for playing football,” Kadena coach Sergio Mendoza said. “He has a really good drive to always become better.”

But making the leap from a DODDS Pacific school to success at the Division I level is something of an undertaking. Only three have done it in the last 30 years, Zama’s Kevin Maxwell (Georgia) and Seoul American’s David Page (SMU) and Wesly Mallard (Oregon).

Of those three, Page went the route that most agree should be taken – return to the States to play two years of high school ball (Northwest Rankin in Mississippi), then the small-school route (Hinds Community College in Mississippi) to be seen face-to-face by Division I coaches.

“If you’re good enough, they’re going to see you,” DODDS Pacific athletics coordinator Don Hobbs said. By going the JC, NAIA or lower NCAA division route, “you find out if you really want to play after two years or even one. And if you’re good enough, you’ll be recognized.”

There simply aren’t enough athletes with college potential for a coach to board a plane and scout in the Pacific to sign maybe one player, when he can drive 10 blocks and see 15 or 20 per team at a 6A high school game in, say, Texas.

Thus, the burden falls on the athlete and their desire to succeed, Mitchell’s coach and Kubasaki athletics director Fred Bales said.

“They have to have the athletic ability, the physical attributes, the academic bona-fides and the burning desire to do it. It’s hard. You have to pursue it,” Bales said.

The only college scout who has visited the Pacific and Europe consistently in recent years is Bob Broshaus of Dubuque, a Division III school in Iowa, which signed Yokota’s Donavan Ball last year.

Mitchell said he’s spoken with family, his own coaches and those in the camps he attended of thinking small instead of dreaming big.

But it’s a mindset he’s still adjusting to.

“In my mind, it’s always been go big or go home,” Mitchell said, adding that his first choice had been Florida State. “You want to compete with the best … knowing I put all my effort into it.”

He also entertained the idea of playing his senior high school year in the States, either in South Carolina or Georgia, where he has family, but ultimately decided to remain true to his high school.

“If I start something, I want to finish it,” Mitchell said. “I wanted to finish a Dragon. You only get a high school senior year that one time, and it’s a significant part of my journey.”

If he had it to do all over again, Mitchell says he wouldn’t change a thing. “No regrets,” he said.