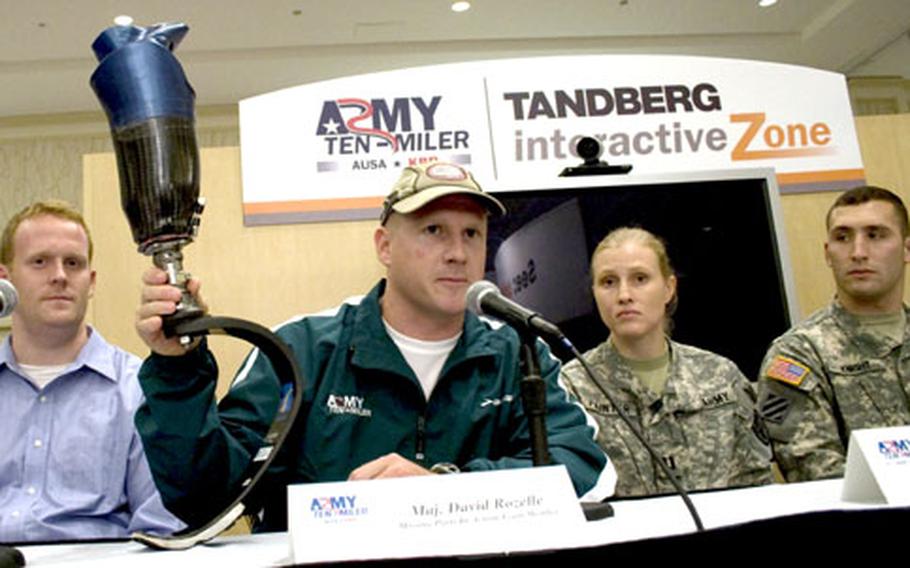 At a Friday press conference in Arlington, Va., Maj. David Rozelle, captain of the Missing Parts in Action team, displays the prosthetic leg he uses for running in races like Sunday&#39;s Army Ten-Miler. (Joe Gromelski / S&S)

At a Friday press conference in Arlington, Va., Maj. David Rozelle, captain of the Missing Parts in Action team, displays the prosthetic leg he uses for running in races like Sunday&#39;s Army Ten-Miler. (Joe Gromelski / S&S) 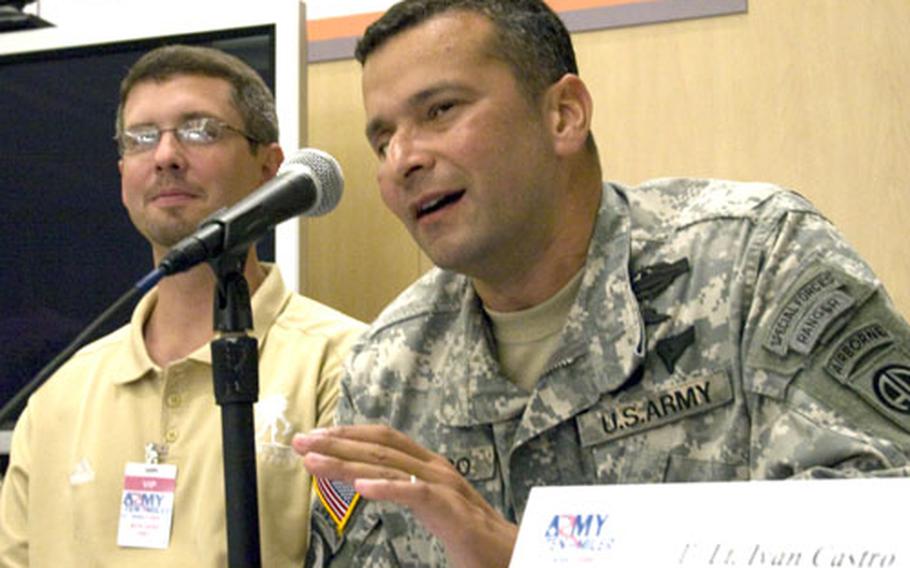 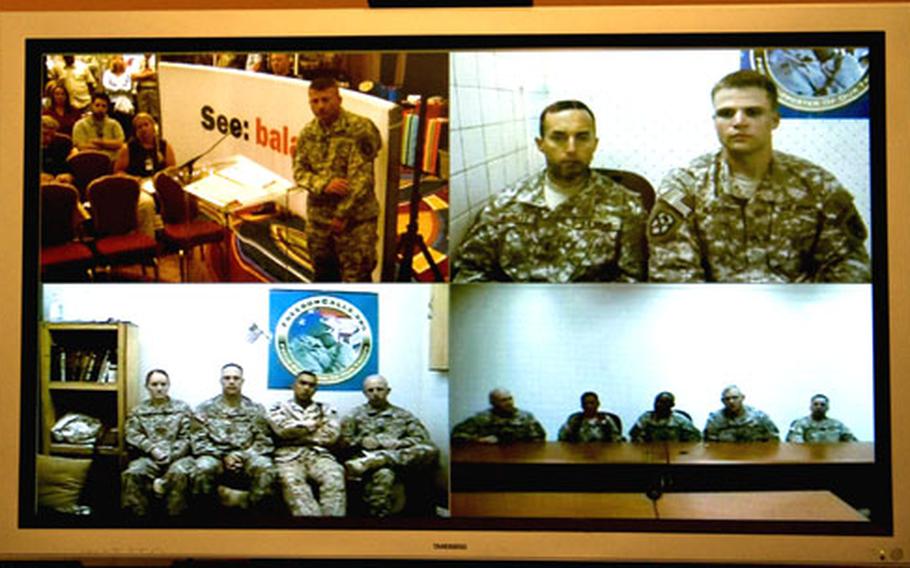 Servicemembers planning to run in shadow races at locations in the Mideast talk to reporters by teleconference. (Joe Gromelski / S&S) 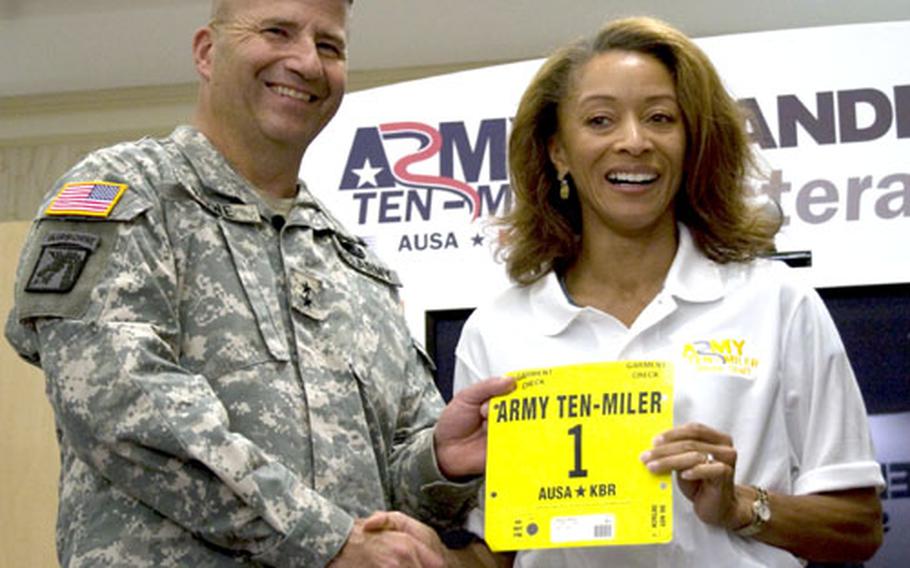 Most of the 26,000 runners taking part in Sunday&#39;s 23rd annual Army Ten-Miler have stories about the problems they encounter in training ... angry dogs, heat and humidity, fitting their distance requirements into a tight work schedule, and so on.

One group of runners in this year&#39;s field has overcome a lot more than that. Missing Parts in Action, made up of military amputees, will once again be out to, as MPIA team captain Maj. David Rozelle told reporters on Friday, "show America that we aren&#8217;t beaten."

&#8220;From the rehab perspective it&#8217;s very neat for us to see, because we&#8217;ve seen these guys when they started out in the ICU [and they] have come all this way," said Rozelle, who lost his foot to a land mine in Iraq in 2003 and has been serving as administrator of the Amputee Care Center at Walter Reed. "Accomplishing a 10-mile run is a lot for most people. And to have an injury sustained where you weren&#8217;t sure if you were going to walk again, to complete 10 miles is a tremendous thing. It&#8217;s a proud moment for us to see what these guys have accomplished under our watch.&#8221;

This year&#39;s MPIA contingent also features 1st Lt. Ivan Castro, who was blinded and lost his right index finger in Iraq last year. He will run while tethered to his training partner. Other runners include Ed Salau, a medically retired first lieutenant from the Army National Guard who is now East Coast director of the Wounded Warrior Project, and Capt. Wesley Knight, an active duty Army officer who has had bone removed from his hip to help reconstruct his injured hand.

"For four years now we are really setting the standard for the program," said Rozelle. "We&#8217;re able to come back and help others realize what a great accomplishment it is, whether you walk it, whether you were only able to get through half of it, or whether you were able to finish it. It sounds silly, but everyone is a winner. It&#8217;s a great opportunity.

The competition for individual honors in this years Ten-Miler may focus on the women&#39;s field. Four-time winner Alisa Harvey admitted that her odds of taking a fifth title home to Manassas, Va., aren&#39;t as good as they would be if Tatyana Pozdnyakova, the eight-time Runners&#39; World female masters runner of the year, weren&#39;t in the race. Jared Nyamboke of Kenya is expected to put up a strong defense of his title on the men&#39;s side.

The Ten-Miler starts at 8 a.m. Sunday at the Pentagon, goes through the streets of Washington, D.C., and finishes back at the Pentagon. The MPIA team will set the stage with a start ten minutes before the rest of the field. And in a tradition that has grown bigger each year, shadow races are planned at such overseas locations as Camps Taji, Al Asad, Victory, Balad, Khost and Bondsteel.

Audio clips:Soldiers in Iraq discuss challenges of running in desert heat via satellite

Maj. Rozelle discussed the founding of Missing Parts in Action

Rozelle discusses how wounded runners are proud of who they are

Rozelle says it is awesome to run with his fellow troops