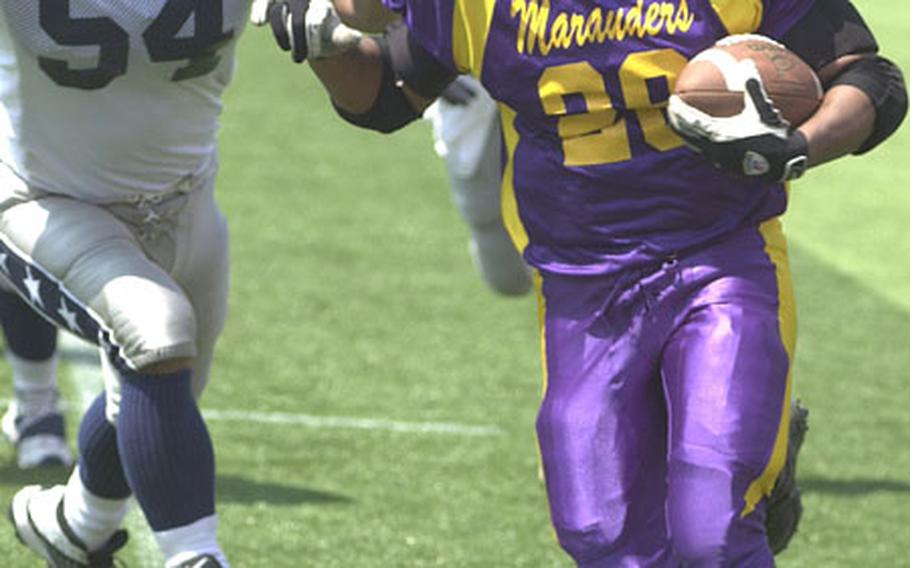 Running back Derrick Magee (26) of the Misawa Marauders tries to elude the tackle of Shunsaku Kimura (54) of the Asahi Silver Star of Japan&#39;s X-League during Saturday&#39;s Marine Bowl at Yokohama Stadium, Yokohama, Japan. The Silver Star won 56-12 over the Marauders, runners-up in the 2002 U.S. Forces Japan-American Football League season. (Dave Ornauer / S&S)

YOKOHAMA, Japan &#8212; The Misawa Marauders endured a bus ride of nearly six hours through Golden Week traffic on Saturday to get from Yokota Air Base to Yokohama Stadium.

What followed on a scorchingly sunny afternoon was even more devastating, as the Marauders, last season&#8217;s runners-up in the U.S. Forces Japan-American Football League, were pounded 56-12 by the Asahi Silver Star, a semi-pro team in Japan&#8217;s corporate X-League.

The rout in what the Japanese billed as the Marine Bowl marked the fourth time since 1999 that a USFJ-AFL team was shelled by an X-League power.

But the long drive to Yokohama &#8212; which began at 5:30 a.m. from Yokota after a day-long drive from Misawa on Friday &#8212; coupled with Asahi&#8217;s skilled blocking and better field position, spelled doom.

Asahi scored the first four times it had the ball, never started inside its own 32-yard line and began six drives in Misawa territory, producing points each time.

Misawa never began a drive outside its 30, turned the ball over twice, was sacked six times and penalized seven times for 55 yards. Asahi suffered two turnovers, punted just once and was never flagged.

The only bright spot for the Marauders was three-time all-USFJ-AFL receiver Terry Lang. The multi-purpose star ran for 19 yards on his only carry, had two returns for 33 yards and caught touchdown passes on fly patterns covering 93 and 88 yards.

It was far from enough, however, to slow the Asahi attack, an assault not unexpected, according to a veteran of USFJ-AFL and X-League football.

Sloan has since moved to Fuji Xerox of the X-League&#8217;s second division. His team played the second of two scheduled Marine Bowl games Saturday, and he observed much of the Misawa-Asahi contest.

&#8220;The USFJ-AFL has a lot of raw talent but it&#8217;s not harnessed, and a lot of it is because the guys are busy with their jobs. They have such a hodgepodge of players and they have to spend a lot of time learning technique, instead of strategy and tactics. It&#8217;s a year-to-year thing.&#8221;

Despite the lopsided outcome, Hemphill found positives, such as an ability to pass.