Mingazzini came back for more - and got it 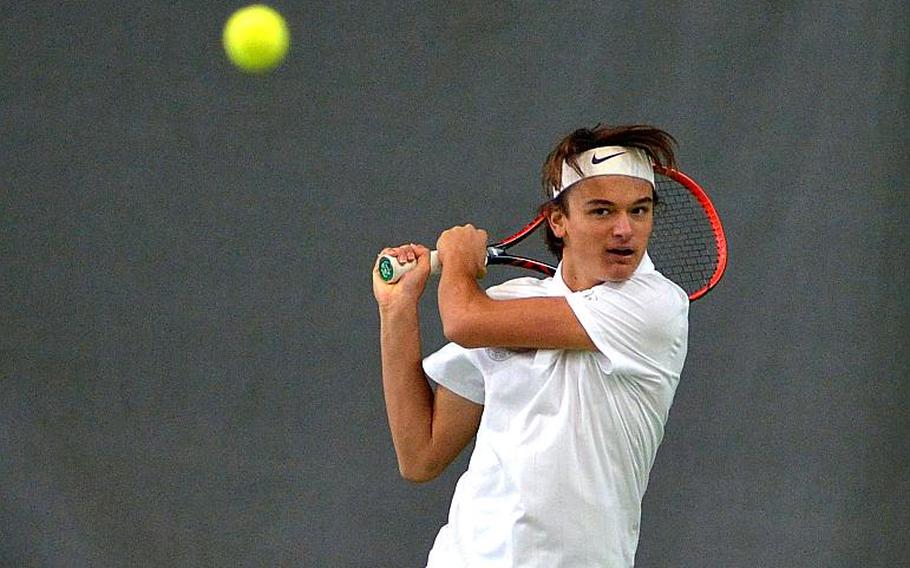 Defending champ Mathias Mingazzini returns a shot from SHAPE's Noah Banken on his way to defending his title with a 6-2, 6-1 win at the DODEA-Europe tennis championships in Wiesbaden, Germany, Saturday, Oct. 28, 2017. Minggazzini also repeats as Stars and Stripes' Europe boys Athlete of the Year for tennis. (Michael Abrams/Stars and Stripes)

After sweeping the 2016 DODEA-Europe boys tennis championship match, Marymount star Mathias Mingazzini had an ominous message for his future challengers.

“I look forward to coming back next year,” Mingazzini said.

He did just that, with predictably similar results. Mingazzini swept the 2017 DODEA-Europe boys tennis championship match in October for his second straight European singles title. As a result, he is the Stars and Stripes boys tennis Athlete of the Year for the second consecutive season.

And he’s not done yet. Mingazzini expects to be back again next year to complete the trilogy.

That’s bad news for any rivals with designs on DODEA-Europe’s top prize. Mingazzini is only getting more dominant.

Mingazzini, again the bracket’s top-seeded player, swept to this year’s title by a 6-2, 6-1 margin, improving on the previous year’s 6-1, 6-4 score. Remarkably, that substantial victory was the closest match he played in the tournament; Mingazzini dropped just five combined games across five preliminary matches and a semifinal.

The final match wasn’t as easy for Mingazzini as the score would seem to suggest. SHAPE contender Noah Banken made him work for every point; it’s just that Mingazzini, as he usually is in DODEA-Europe tennis, was up to the challenge.

“I think this one (is better) because I needed a strong mentality because my opponent was so good,” he said. “I think today I just pushed the ball as hard as I could, and I’m satisfied with how I played.”

That kind of good-natured approach to the game is well-known in Italian tennis circles. While he’s ruthlessly efficient in closing out opponents on the court, Mingazzini is equally generous with his time and talents.

“Mathias is an outstanding young man,” Vicenza coach Mark Gillett said. “Always very friendly and positive with players from other teams and always willing to help out a beginner player.”

Gillett also noted that Mingazzini came back from his 2016 title a better player, testament to his year-round competition schedule and work ethic.

“He is dedicated to the sport,” Gillett said. “I was surprised at how much his game improved this year.”

One can only imagine what Mingazzini will bring to the DODEA-Europe courts next year.