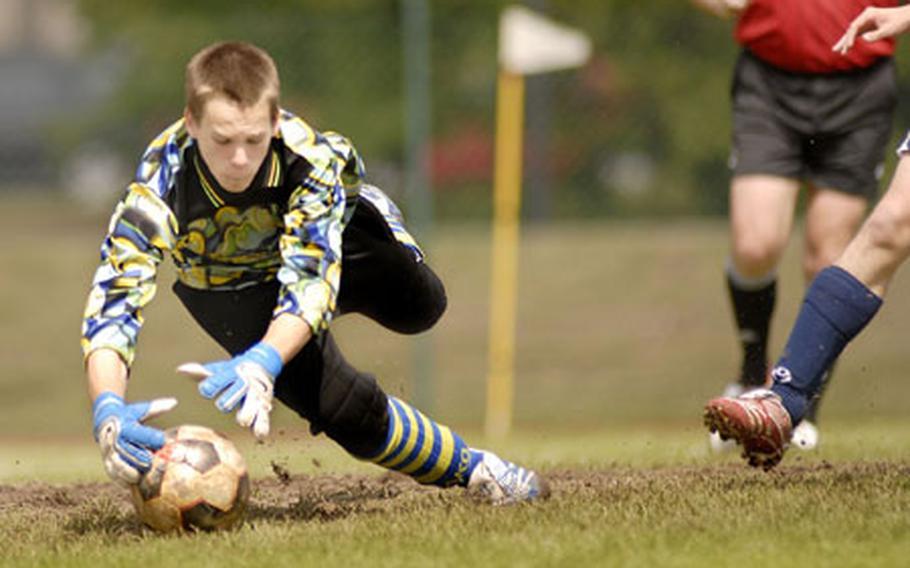 Billy Lucas, a freshman from Bamberg High School, dives for the ball during the championship game in the DODDS-Europe boys Division IV tournament against Milan on Friday. Milan defeated Bamberg 4-0 to win its third straight title. (Ben Bloker / S&S)

Billy Lucas, a freshman from Bamberg High School, dives for the ball during the championship game in the DODDS-Europe boys Division IV tournament against Milan on Friday. Milan defeated Bamberg 4-0 to win its third straight title. (Ben Bloker / S&S) Alberto Frezza, a senior from Milan, looks for open teammates during a drive Friday at Ramstein. Frezza was named the tournament MVP. (Ben Bloker / S&S)

RAMSTEIN AIR BASE, Germany &#8212; Bamberg&#8217;s freshman goalkeeper Billy Lucas has a strange idea of what makes for a good time.

Milan, which displayed ball skills far above the average for DODDS-Europe teams, beat Lucas twice in the first five minutes. Junior Andrew Boynton got the first one, shoving home a rebound. Less than a minute later, senior midfielder Paolo Gariboldi ran on to a through ball on the left side of the box and drilled a shot just inside the left post past a diving Lucas.

Rather than succumbing to shell shock, Lucas dug in for a long struggle.

A shot off the post and a goal-mouth header that drifted wide of the net got Lucas started on his regrouping project. He then repelled a point-blank blast to the left of his net from Alberto Frezza, the first of eight saves he registered by halftime.

Lucas kept it up after intermission, making four more saves before Gariboldi unleashed a 35-yard shot from the left sideline that found the upper right corner of the net. The dream shot made it 3-0 11 minutes into the final stanza. Four minutes later, Davide Cornelli, standing on the right side of the box, turned on a pass and fired it just inside the right post past a screened Lucas to finish off the three-peat.

Amid the Milan celebration, coach Guy Falconer was looking for larger fields to conquer.

Tournament MVP Alberto Frezza had no doubts about the outcome of such a contest.

Milan, which plays D-II and D-III teams during the regular season in the American Schools in Italy league, outscored its five foes here by a combined 26-2.

Bamberg, which went 4-1 in the tournament after a 2-4 regular season, never gave in to the quick and skillful Panthers despite having to scramble most of the game and losing defensive midfielder Brett Lemley to a leg injury early in the second half.