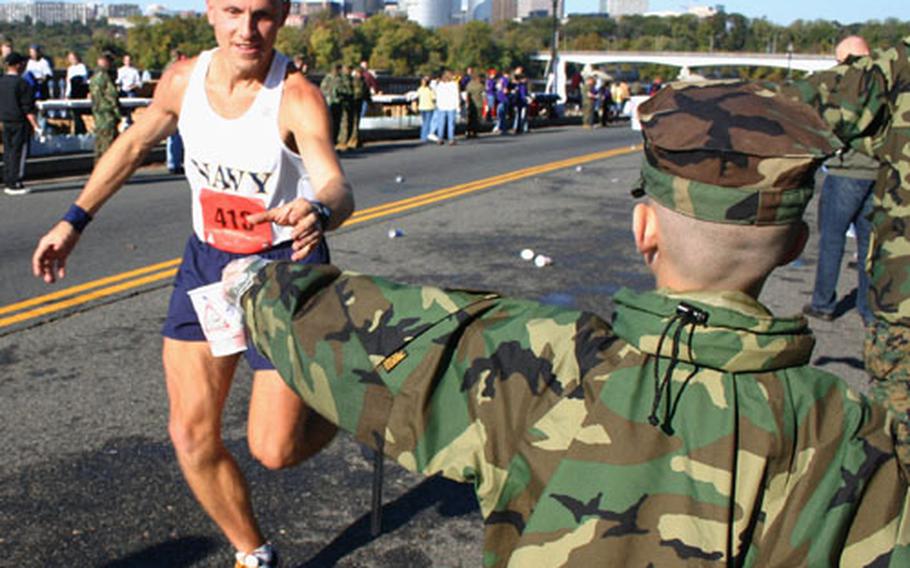 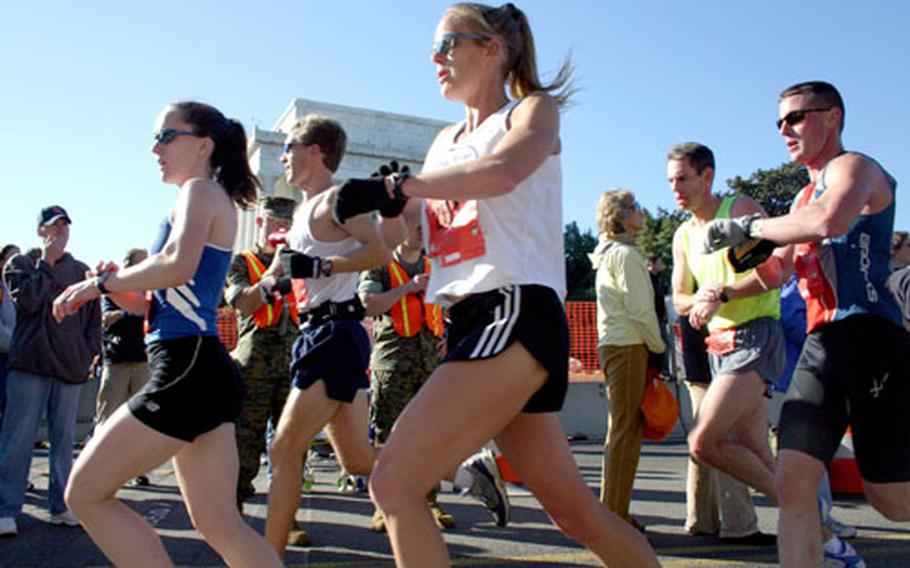 Runners check their splits as the pass the 10-mile mark at the Lincoln Memorial during in Sunday&#39;s Marine Corps Marathon. (Joe Gromelski / S&S) 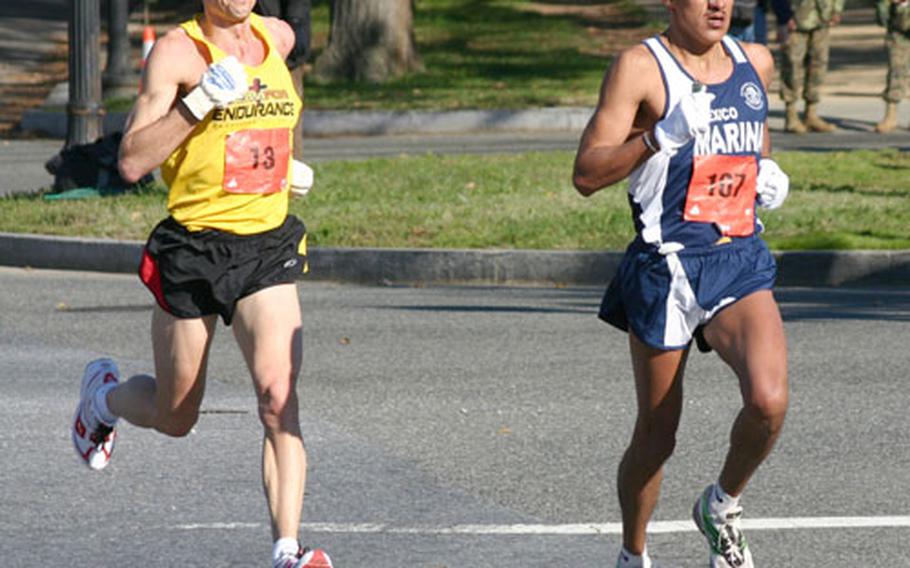 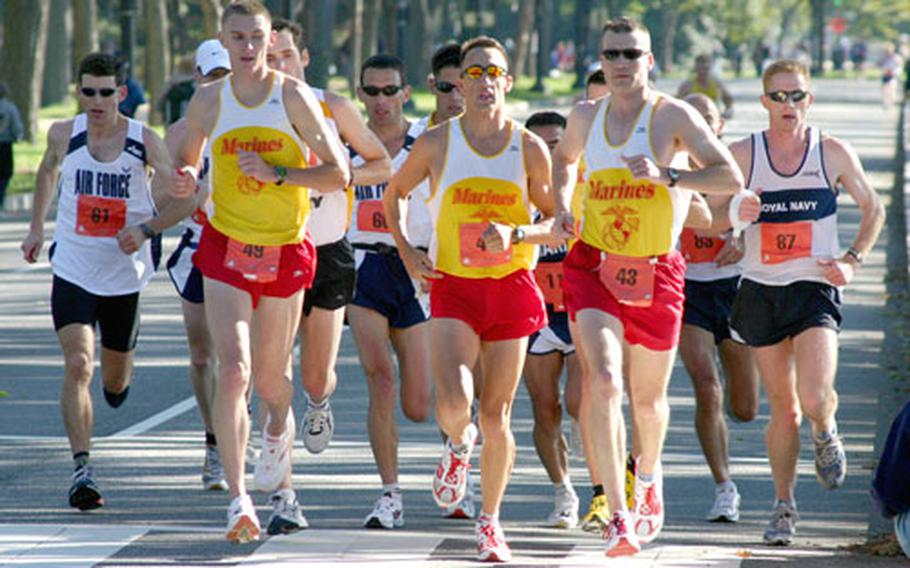 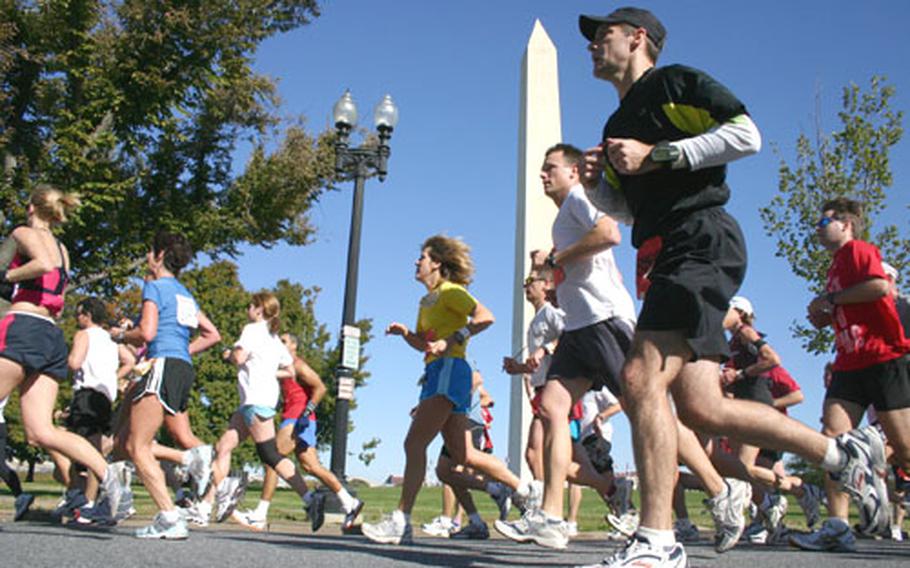 Speaking to reporters through a translator, Garcia said his legs started giving out near the end of the 26.2-mile race, and by mile 24 he had a cramp in one of his hamstrings.

Garcia, 34, said he trained in the Desert of the Lions in Mexico to run in the cold, but he was still unprepared for the chilly weather Sunday morning, which made it harder to breathe.

This is the seventh race Garcia has won, he said.

The Mexico City man said he has been running with the Mexican military team for 14 years and is ranked fifth in Mexico.

Kvasnicka, of Great Falls, Va., said she was not satisfied with her performance last month in a Minnesota marathon, where she got dehydrated and sick, so she wanted to run the Marine Corps Marathon to see what she could do.

However, Kvasnicka said it was not until about a week ago that she made the decision to run in the marathon. Until then, she said she was focused on recovering from the last marathon.

Todd Philpott was the first competitor in a wheelchair. He finished with a time of 1:45:15.

Philpott, 47, said he has been training with 10 disabled Marines competing with the Achilles Track Club.

The Sydney, Australia, man said it is &#8220;nothing short of an honor&#8221; to train with Marines who have lost limbs in Iraq.

About 27,000 people took part in Sunday&#8217;s marathon, of which, about two-thirds competed in their first Marine Corps Marathon, according to the marathon&#8217;s media guide.

One of those firs-timers to the Marine Corps Marathon was former Marine Rick Posada, who said he always wanted to compete in the race.

Posada, of Houston, said his seven years in the Marines made running a part of who he is.

He also said the challenge of running marathons.

Ermey said running long distances is 90 percent psychological. When he was involved with recruit training, instructors would take recruits on five-mile runs but tell them they were only running three miles, he said.

He said he used to run five miles a day himself, but with his current work schedule, he finds it hard to get in his PT.