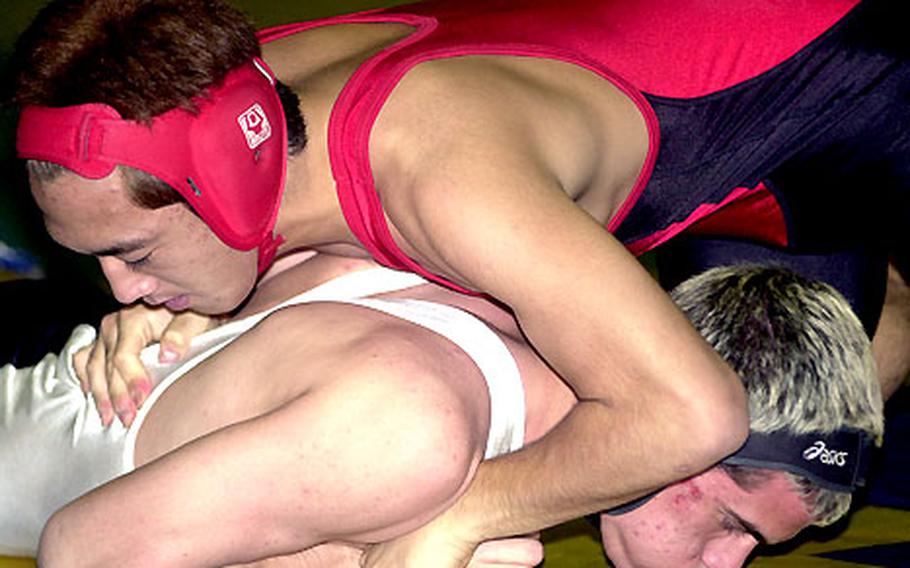 Go Yamada gets the upper hand on Alex McKinstry of Zama American during a Japan Wrestling League meet in December. (Dave Ornauer / S&S)

Go Yamada gets the upper hand on Alex McKinstry of Zama American during a Japan Wrestling League meet in December. (Dave Ornauer / S&S) 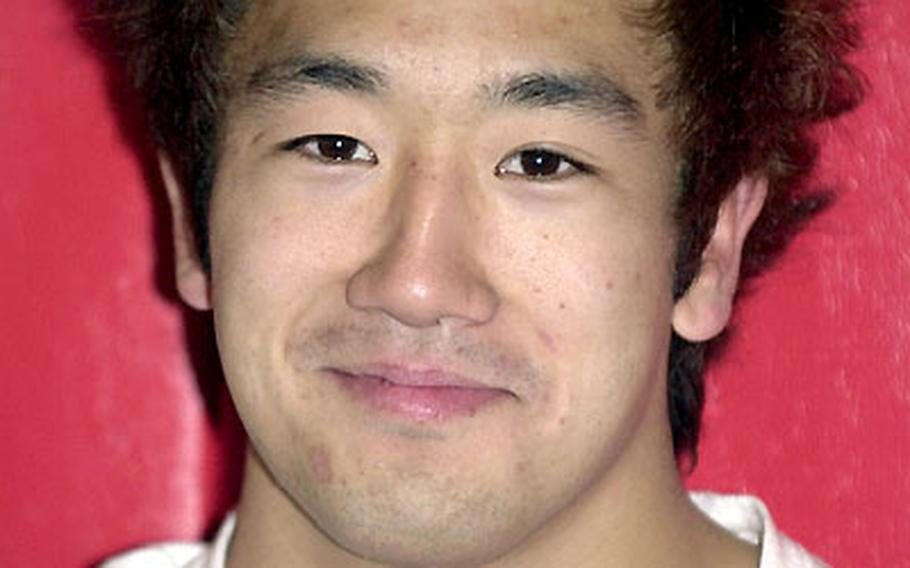 The 40 wrestlers gathered at the center of the mat, while Smith spent the next few minutes laying out the team&#8217;s goals and challenges for the coming six weeks.

A few feet away, senior 129-pounder Go Yamada didn&#8217;t need words for motivation. Lying on his back, he closed his eyes, perhaps feeling more than ever the ceaseless cauldron, one of frustration, resolution and determination, that burns brightly in his belly.

The source of the fire within: Two aggravating mid-February defeats that cost him a chance to win individual weight-class gold medals in the past two Far East tournaments.

The memory serves as incentive, governing his every conditioning run, practice bout, regular-season match and appearance in league and invitational tournaments during his final season.

Thus far in the 2002-03 campaign, he&#8217;s 5-0 in dual meets, has won weight-class titles in two invitationals and took outstanding wrestler honors in a Department of Defense Education Activity tournament last month at Sasebo Naval Base.

It&#8217;s the Far East losses that are foremost in his mind.

Last March 1, at Okinawa&#8217;s Camp Foster, Paul Devendorf, of Brent International School of the Philippines, superior decisioned him 16-6 in the 122-pound final.

Yamada insists that physically, he was the equal of both his conquerors.

It&#8217;s the mental aspect, say Yamada and coach Smith, that led to Yamada&#8217;s downfall in both Far East defeats.

&#8220;I have to make myself psychologically, have to want it more than the other guy. I have to believe in myself,&#8221; Yamada said.

&#8220;The competitive level, the high intensity of the championship round for both wrestlers, the psychology of such a match, can be established with the first takedown. It can break a guy&#8217;s back. You never know what can happen ... It can turn into a blur.&#8221;

Yamada, the son of retired Army Master Sgt. Keizo Yamada, a Vietnam veteran, moved to Japan with his family from San Francisco during his fourth-grade year. First living in Kawasaki, then moving to Yokohama last year, he&#8217;s been commuting to Yokosuka schools since coming to Japan.

A soccer player since he was young, Yamada approached Smith just a few years ago for a wrestling tryout, joining the team at midseason 2000-01. Smith said he liked what he saw in Yamada right away.

&#8220;He&#8217;s a great athlete with great instincts,&#8221; Smith said, adding that Yamada always is willing to help other wrestlers develop their talent.

The down feeling that came with Yamada&#8217;s two tough Far East losses can motivate him to greater efforts, Smith said.

Yamada no longer appears intimidated by a supposedly stronger wrestler&#8217;s reputation, his coach said. &#8220;If you say a guy is tough, he takes that as a personal challenge,&#8221;Smith said.

All that remains, Yamada and Smith said, is to take that last big step. Coach and wrestler feel Yamada now has the proper mental focus to make that leap.