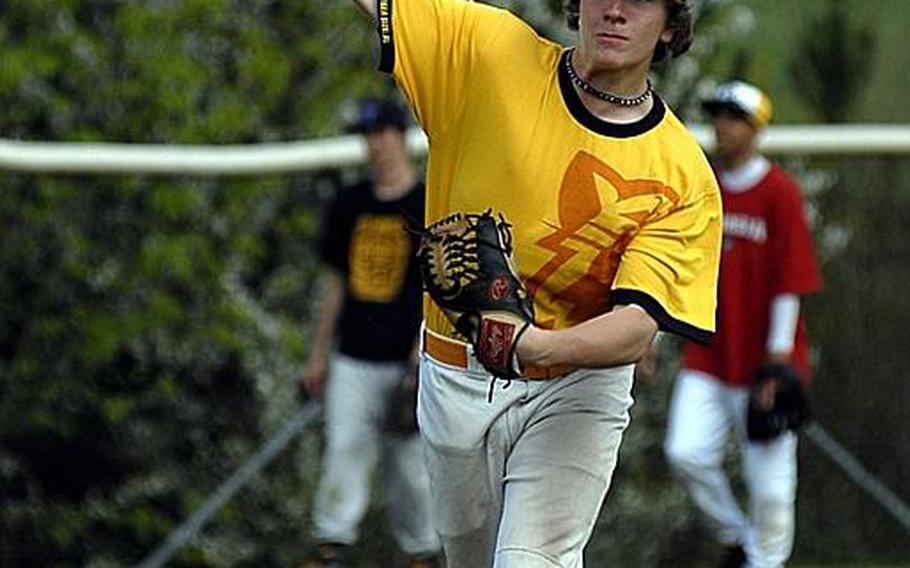 Buy Photo
Patch junior Dylan Measells, who has surrendered just one hit in two outings this season, gets loose Tuesday at a practice session at Stuttgart's Robinson Barracks. (Warren Peace/Stars and Stripes)

Buy Photo
Patch junior Dylan Measells, who has surrendered just one hit in two outings this season, gets loose Tuesday at a practice session at Stuttgart's Robinson Barracks. (Warren Peace/Stars and Stripes) 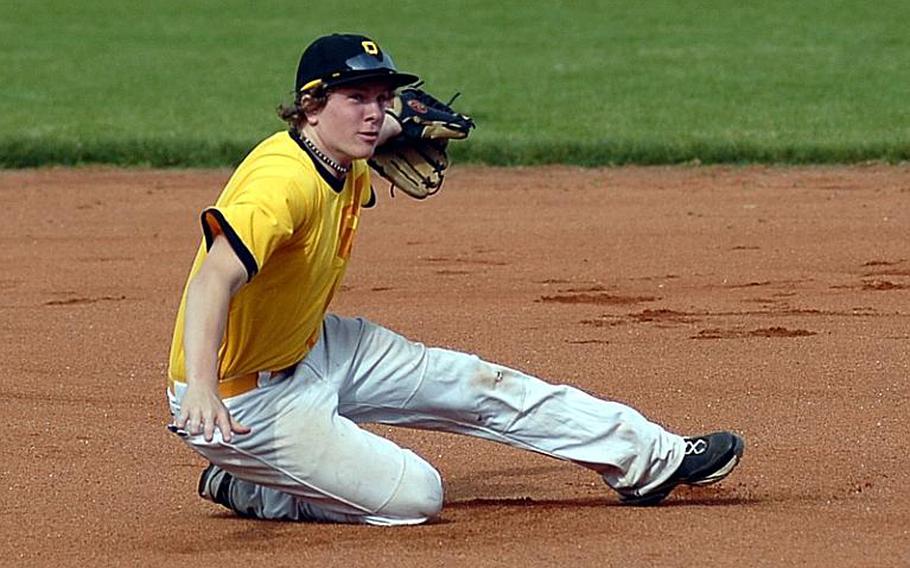 Buy Photo
Dylan Measells excels in all aspects of the game - on and off the mound. He is a solid fielder who hit .455 during the regular season and .500 during the DODDS-Europe Division I baseball tournament. (Warren Peace/Stars and Stripes)

STUTTGART, Germany &mdash; You&rsquo;ve heard of gym rats, those who devote every possible moment to working on this shot or honing that skill.

Patch junior Dylan Measells, 16, is their outdoor equivalent. The Panthers&rsquo; ace right-hander relishes every possible chance to get better at the game he loves.

Last year, Measells, the No. 2 starter on a staff led by graduated lefty Justin Phelps, compiled a 6-0 record that included a no-hitter and a perfect game. He posted a 1.12 ERA in 31-1/3 innings of work punctuated by 43 strikeouts and just three walks.

Marbury says the 2011 edition of Measells is even better.

In two appearances, Measells has thrown another perfect game, a 17-0 victory over Hohenfels on March 26. He surrendered a lone single last Saturday in a 19-1 conquest of Ansbach.

Measells accomplished that with a curveball, change-up and a fastball Patch assistant Larry Tannenbaum said hits 84-85 mph on the radar gun. Not surprisingly, the heater is Measells&rsquo; No. 1 choice for his catcher to call.

&ldquo;I like to get a first-pitch strike,&rdquo; he said, &ldquo;but if I get down in the count, I can rely on my curveball.&rdquo;

Measells also performs at an All-Europe level when&rsquo;s he&rsquo;s off the mound. Last year, Measells, who can play anywhere on the field, according to former coach Sean Phelps, upped his .455 regular-season batting average to .500 in the European tournament. The increased production helped the Panthers to the D-I title they won in a 10-9 come-from-behind victory over 2009 champion Ramstein.

This year, in Patch&rsquo;s four victories, Measells is doing even better than that, putting up three-for-three games at the plate in three of his team&rsquo;s four games.

Fittingly, given Measells&rsquo; attitude towards the game, those numbers are storybook stuff.

&ldquo;I played in the YS (Youth Service) high school championships on a 13-15-year-old team,&rdquo; said Measells, a fixture in Stuttgart-area baseball since he was a Little Leaguer. &ldquo;As a DODDS sport, it&rsquo;s definitely more serious.&rdquo;

Unsurprisingly, Measells is taking his baseball future just as seriously. This summer, he&rsquo;s bound for California.

And at the same time perhaps catch the eye of college or pro scout, something hard to do in the past.

&ldquo;Playing college ball is definitely on my mind,&rdquo; Measells said, &ldquo;all the time.&rdquo;

Getting noticed can be a problem for Europe-based athletes who play limited schedules far from the spotlight. But the success of Patch senior Cavan Cohoes, who&rsquo;s agreed to accept a baseball scholarship from Ohio State if he decides not to sign an all-but-certain offer to play professionally, has upped the credibility of military community athletes.

That&rsquo;s a ray of hope for local players, but even without it, Measells sees no reason to complain about his Transatlantic status.

&ldquo;It&rsquo;s baseball,&rdquo; he said. &ldquo;If you love it, it&rsquo;s great to get a chance to play it.&rdquo;