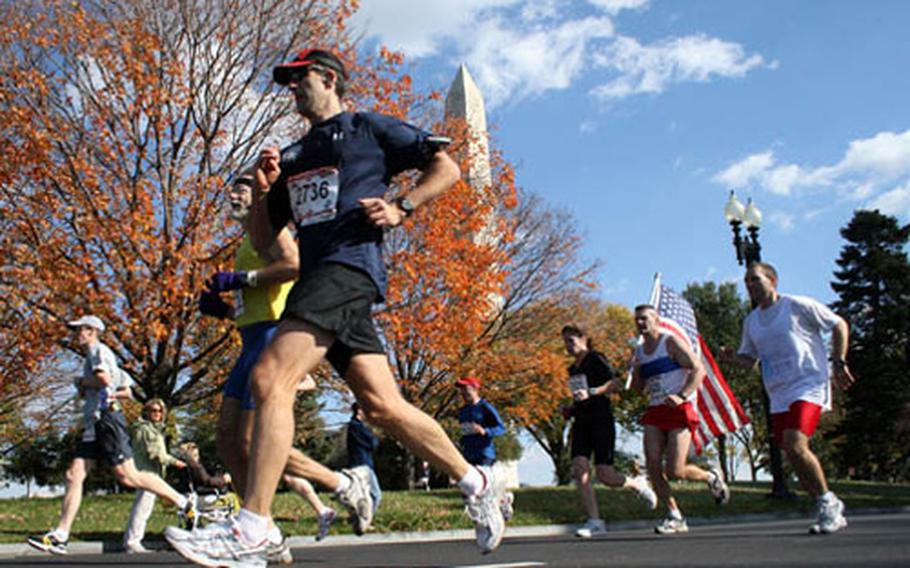 Runners in Sunday&#39;s Marine Corps Marathon pass the Washington Monument on their way to the 14-mile mark, with Mark Clingan of Jacksonville, N.C., carrying the colors. (Joe Gromeski / S&S)

ARLINGTON, Va. &#8212; For a second year in a row, Ruben Garcia, a sailor in the Mexican navy, took first place in Sunday&#8217;s Marine Corps Marathon.

In another repeat, Todd Philpott, 48, of New York City, won the hand cycle race for the second time in as many years.

Garcia finished the 26.2-mile race with an unofficial time of two hours, 21 minutes and 17 seconds.

Speaking through a translator, Garcia said he felt tired but elated after finishing the race.

He also said he felt more pressure this year to try to win the race again.

Garcia said he intends to go for a three-peat next year.

Air Force 1st Lt. Ben Payne, 25, was the first U.S. servicemember to complete the marathon with an unofficial time of 2:28:03.

Payne, a flight instructor based in Columbus, Miss., said the last three miles of the race were the most difficult part for him, but he had help.

Capt. Tim Tapply was the first member of the Marine team to cross the finish line with a time of 2:34:37.

Tapply, now in the Individual Ready Reserve, said a lot of his friends are still deployed and some have been injured, making them unable to run.

Both said they were discouraged at not being the first servicemember to finish the race.

And Laura Thompson, 31, of Portland, Ore., was the first woman to cross the marathon finish line with an unofficial time of 3:00:10.

About 34,000 runners participated in the 31st Marine Corps Marathon on Sunday, organizers said.

The race took a tragic turn when one of the runners died, an official said.

No further information on the runner was available pending notification of the runner&#8217;s family, the official said.

It was unknown Sunday whether the runner was a man who collapsed shortly after the race began because there had been several such incidents, the official said.

Before Sunday&#8217;s race, several of the runners talked to Stars and Stripes about what brought them out to run.

Marine Capt. Kevin Shea, 30, said he felt compelled to run to honor the Marines he knows who have been killed in Iraq.

The Woodbridge, Va., man said that downrange, Marines are working 24/7.

&#8220;I think the marathon kind of replicates that day-in day-out grind where you have to push yourself to the limit,&#8221; he said.

Also at Sunday&#8217;s race, Marine Cpl. David Strother, 21, showed up ready to run the entire marathon in his combat boots.

The Charlotte, N.C., man said he initially only joked about running in his boots, but rumors in his unit forced him into it.