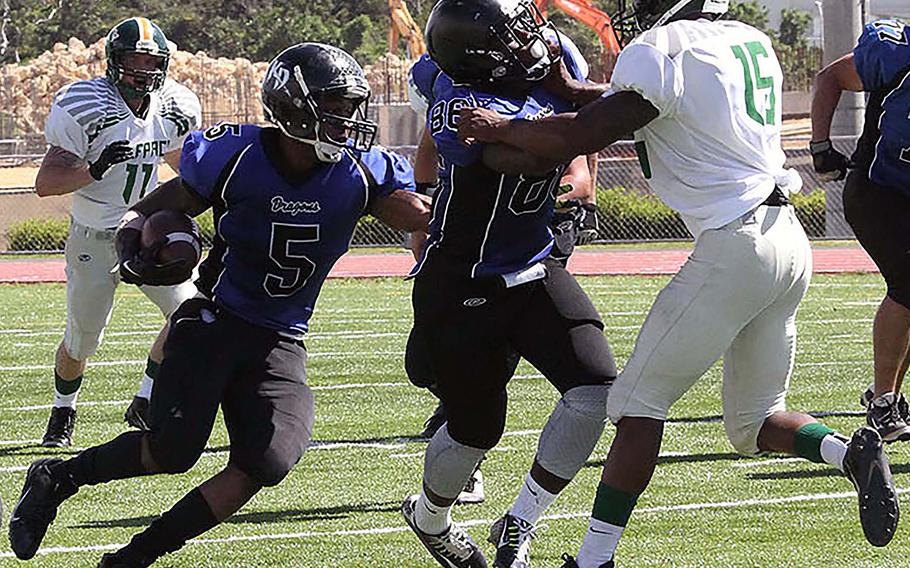 Kadena RB Emmanuel Griffin (5) gets an escort from teammate Terrell Dixon Jr. (86) as Hansen DB Clinton Ranson tries to stop them during a game Saturday, June 13, 2015. (Marie Obsuna/Special to Stars and Stripes)

Kadena RB Emmanuel Griffin (5) gets an escort from teammate Terrell Dixon Jr. (86) as Hansen DB Clinton Ranson tries to stop them during a game Saturday, June 13, 2015. (Marie Obsuna/Special to Stars and Stripes) 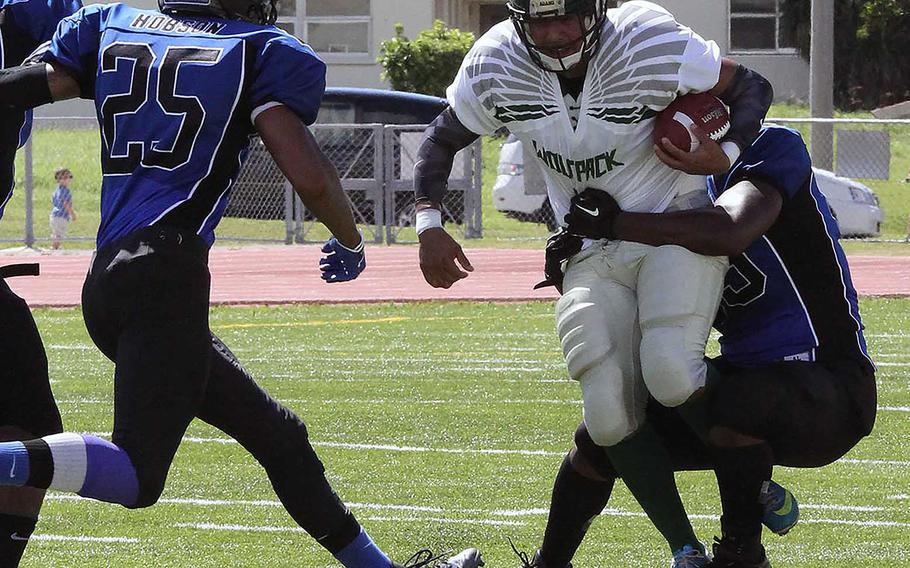 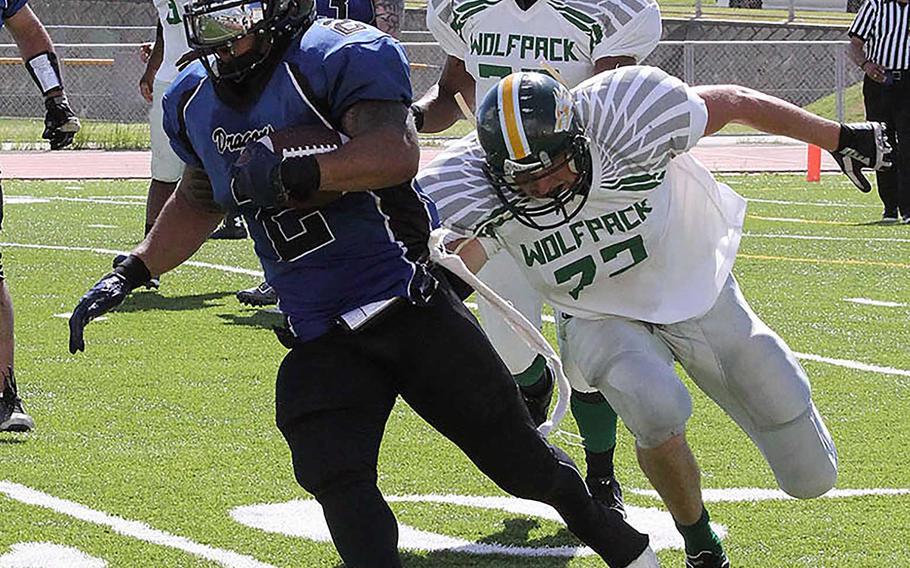 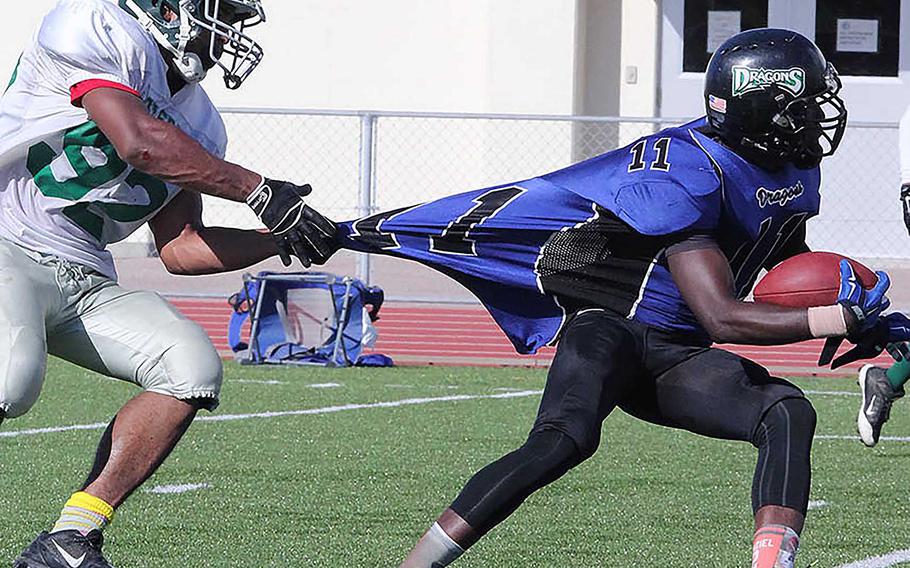 Hansen punt coverage man Dom Gillett tries to hang on to the jersey of Kadena punt returner Brandon Avery in the third quarter of a game Saturday, June 13, 2015. Avery broke through seemingly every Hansen tackler after losing his jersey and went 80 yards for a return touchdown that ultimately was called back on a holding penalty. But it was the play that turned the game on its head, Dragons' coach JB Baker later said. (Marie Obsuna/Special to Stars and Stripes)

KADENA AIR BASE, Okinawa — A veteran warhorse from the old Okinawa Football League of the mid-2000s, Emmanuel Griffin, showed he still had some fire in his game, Saturday.

He rushed for 102 yards and a touchdown on 14 carries, and helped turn the game around with a 74-yard, third-quarter catch-and-run to power Kadena to its first Torii Bowl title. The team rallied from a 10-7 halftime deficit to upend Hansen 26-16 in steamy conditions at Ryukyu Middle School’s Habu Field.

“And that’s what I did. The (offensive) line was awesome. They were telling me what holes were open and all we did was say, ‘Manny, hit the hole. Hit that hole.’ He’s a truck.”

The third time was the charm for the Dragons, who finished the season 7-1 overall and were finally successful in their third straight trip to the U.S. Forces Japan-American Football League title game. They lost at Misawa 20-13 in 2013 and 36-0 to Kinser in last year’s game.

“All these guys put it on the line. They played very hard, said Baker. "The coaches set up a good gameplan, we watched a lot of film this week, our defensive coaches did an outstanding job.”

Baker was a receiver and Griffin a third-string running back when the Dragons won titles in the old Marine Corps Community Services-sponsored OFL in 2004 and 2005. “From third string to MVP of the championship game. That’s amazing,” Baker said.

This was a Hansen team playing without nine of its regulars, six deployed, three injured, “and they were all key players," outgoing Hansen coach Cortez Pree said. "That was a big blow to us. We just didn’t have the depth, but they played their hearts out.”

He also had to recruit receivers and other players off the camp’s rugby team, many of whom Pree said had never played football. “They came out and just actually put forth the effort.”

It looked early on as if a pickup Wolf Pack team just might give the Dragons a run for their money.

Kadena struck first, on Finnegan’s 60-yard TD pass to Alvin Stewart. But Hansen QB Jesse Swanson replied with an 11-yard scoring pass to Fred Williams, and Brian Marquez ended the first half with a 24-yard field goal to put the Wolf Pack up by three.

But three plays in the third quarter turned things around for Kadena:

The first didn’t even count. Brandon Avery took a punt and broke through seemingly every Hansen tackler, losing his jersey on the way to the end zone for an 80-yard scoring play that was called back on a holding penalty.That seemed to light a spark under the Dragons. Griffin caught his lengthy pass and rushed 5 yards for a score two plays later.

On the next series, Dro Black sacked Swanson, who fumbled and it was returned 22 yards by Troy Evans to the Hansen 14. Two plays later, Ralphael Jones scored from the 5 to make it 19-10 Kadena. Blake Robinson then made a one-handed interception grab of a Swanson pass on the ensuing series.“Three amazing plays,” Baker said.

Williams made it a tighter game for Hansen, intercepting a pass which set up his 28-yard TD grab from Swanson. But then Griffin took over, rushing five times for 39 yards on Kadena’s ensuing 68-yard drive. Keenan Prince’s late interception of Swanson sealed it for the Dragons.

For Hansen, Swanson was 17-for-29 for 191 yards, Williams had six catches for 71 yards, Dom Gillett had four catches for 79 yards and Clinton Ranson, playing backfield and returner, had 181 all-purpose yards on 15 touches.