Wrestling Athlete of the Year

Mannier was unstoppable force on mat 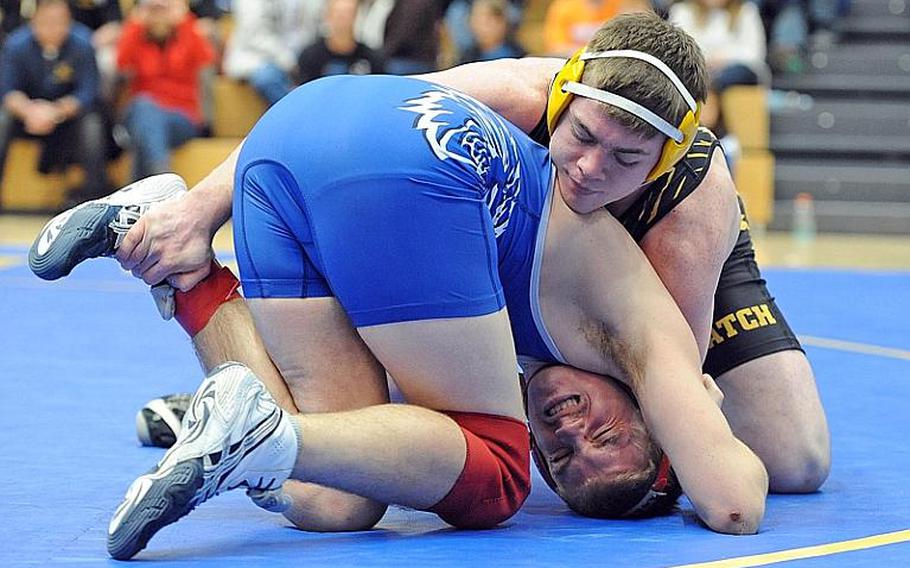 Patch's Robert Mannier, top, defeated Ramstein's Joseph Ankrom in the 182-pound final at the DODDS-Europe wrestling championships in Wiesbaden, Germany, Saturday. Mannier was unbeaten during the year, won every match in the championships by pin and was selected Stars and Stripes' wrestling Athlete of the Year. (Michael Abrams/Stars and Stripes)

No lesser words adequately describe the level of mastery Patch senior Robert Mannier exhibited over DODDS-Europe wrestling this season. As a result, the reigning two-time 182-pound European champion is the Stars and Stripes wrestling Athlete of the Year.

Mannier came to Patch prior to his junior season, using an aggressive and somewhat controversial stateside style with him to the DODDS-Europe ranks.

The technique, honed over his time with nationally-ranked prep powerhouse Graham High School in St. Paris, Ohio, is an intimidating and deflating experience for his opponents. Mannier takes his opponent down and record the earned points. That’s where it gets unusual. Mannier then often allows his opponent to escape his clutches, only so he can take him down again. The tactic allows the opponent to record a stray point here and there, but as the matches invariably end with a Mannier pinfall anyway, the issue is moot.

“The first time I’d seen him wrestle, I was like, ‘This is different,” said Patch coach Norm Matzke, contrasting the style with the standard DODDS practice of pinning an opponent at the first opportunity.

“It was a way to dominate his opponent and get into his mind,” Matzke said. “Once he got them broken down that way he would finish them up.”

The results are self-evident.

The 185-pounder recorded consecutive undefeated seasons as a junior and senior, winning a European title by major decision in 2012 and by pinfall in 2013. Mannier pinned all six of his postseason opponents this February; his 95-second pin in the final was the only pinfall victory of the event’s 14 European championship matches.

But it was back in the States where Mannier got a firm grasp on his talent – and his future.

In April, Mannier competed at the National High School Coaches Association National Championships at Virginia Beach, Va. The heightened challenge and his strong fourth-place showing had twin effects: it showed him how formidable the competition could be, and it proved to him that he was not out of place at the highest levels of his sport.

“When I placed up there, it was actually a very big sense of accomplishment,” Mannier said. “Placing there obviously means you’re a big deal. All these years of training have paid off.

“It made a big impact on my life.”

His performance caught the attention of college coaches, including those at the Naval Academy. A visit to Annapolis yielded an invitation to wrestle for the Midshipmen. He’ll do so after a year at the Naval Academy Preparatory School in Newport, Rhode Island, following his older brother, James, currently a junior member of the Navy wrestling squad.

“I look up to him, so I wanted to go there as well,” Mannier said.

Mannier’s impact on DODDS-Europe wrestling will be felt long after he’s taken his place in Annapolis. The senior, voted one of four Panther captains by his teammates, has been a mentor for the younger members of the deep Patch program. Matzke said Mannier’s edgy style has caught on with the underclassmen, and as such may eventually be commonplace on European mats.

For all his achievements and influence, Mannier leaves behind only a simple message of advice for the Panthers that will attempt to take his place.

“Just go out there,” Mannier said. “And be confident and wrestle.”