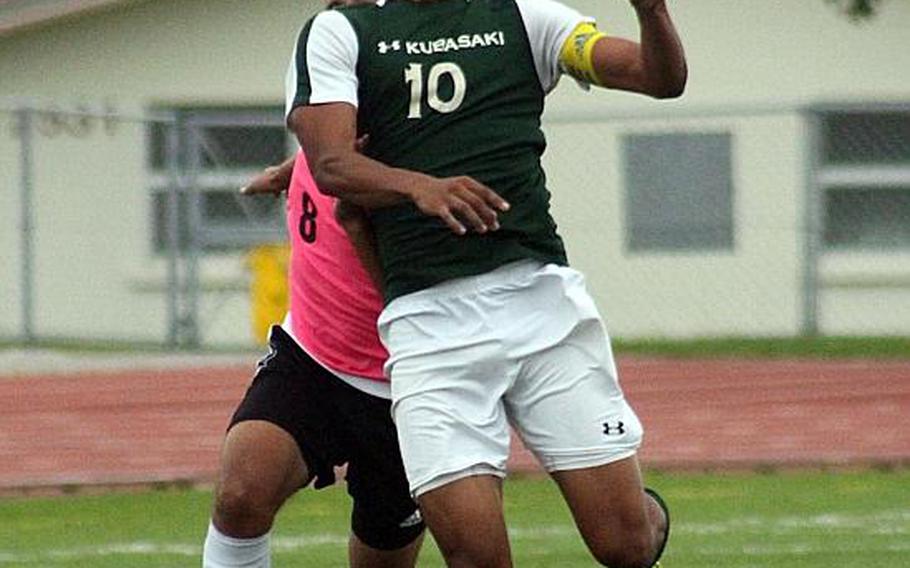 CAMP FOSTER, Okinawa – A soccer team’s best striker can usually count on being defended more tightly than other players on his team. But for two seasons, Miles Mahlock was subject to the sort of blanket coverage that few scorers in the Pacific rarely see.

Despite having a man on him throughout every match during the just-completed 2016 campaign, the Kubasaki senior scored 32 goals, tops in the Pacific, and assisted on 11 others.

Two came in the championship match as the Dragons capped a 20-0-2 campaign by blanking Christian Academy Japan 2-0 in the Far East Division I Tournament title match. It was Kubasaki’s fourth title since 2001 and first since the 2008 season.

For those accomplishments, Mahlock earned D-I Tournament Most Valuable Player honors. He has also been named Stars and Stripes’ Pacific boys soccer Athlete of the Year, edging out a field that included Kai Lange of Matthew C. Perry, the Division II MVP.

“When they man-mark you, all game long, game after game, all season, and you still score that many goals, that speaks volumes about his talent and ability,” Kubasaki coach Tony Washington said.

For his part, Mahlock said that not only did he not mind being defended so tightly, he welcomed it.

“I liked being man-marked. No extra pressure. It was kind of an honor,” he said.

Being marked in that manner “gave me an extra edge,” he said, allowing him to pull opposing players out of position to compensate for one player defending him.

“He’s a strong player, with or without the ball,” Washington said. “His speed. His assists; that’s something nobody talks about. He reads the field well and finishes well; you give him any space at all and he finds the back of the net.”

Mahlock credited his teammates for his and the team’s success, singling out fellow senior Imani Washington – the coach’s son – who had 19 goals and 13 assists, and the Dragons’ defense.

“Without our defense, we wouldn’t have made it as far as we did,” Mahlock said, citing senior Preston Snyder, named the D-I Tournament’s top defender for the second straight years. “He was a rock back there.”

Washington, meanwhile, was the provider,” Mahlock said, compared to last season, when the Dragons finished second in the D-I Tournament and Washington scored 29 goals, with Mahlock assisting on 10 while scoring 11.

The toughest hurdle he and the Dragons faced this season, Mahlock said, came an April 23 match at Maehara, a Japanese school which won the Okinawa title two years before. The Dragons fell behind 2-0, but Mahlock scored twice and Kubasaki played to a 2-2 draw.

“After we did that, I figured (winning) Far East was something we could achieve,” Mahlock said.

After two years of finishing second in D-I, that championship finally came, with Mahlock being the signature player, the elder Washington said. “You dream of coaching somebody like that during your career,” he said.