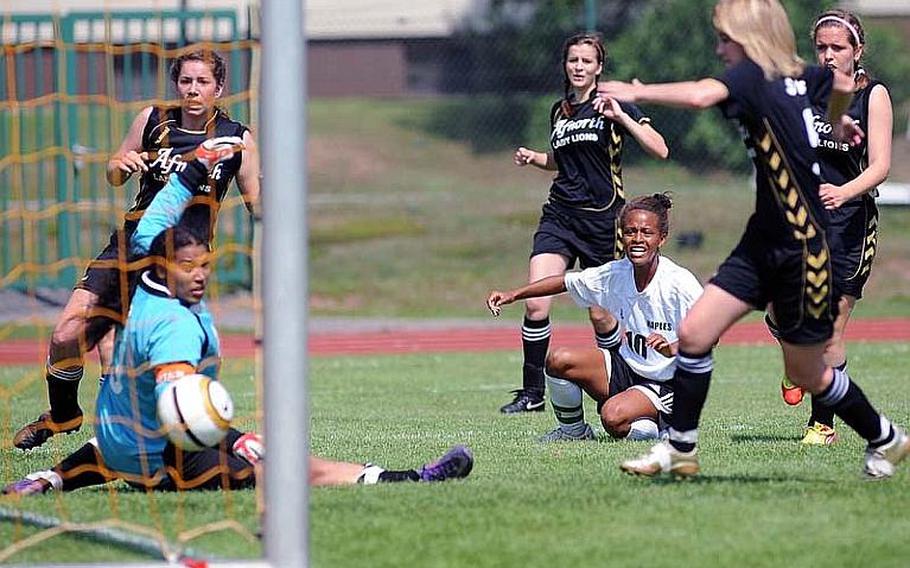 Surrounded by AFNORTH players, Alexandra Mack of Naples watches her ball bounce into the net past keeper Jasmine Doll for the winning goal in the Division II final at the DODDS-Europe soccer championships. Doll held her goal clean against the high-scoring Wildcats until Mack converted in the final minute for the 1-0 win. (Michael Abrams/Stars and Stripes)

Surrounded by AFNORTH players, Alexandra Mack of Naples watches her ball bounce into the net past keeper Jasmine Doll for the winning goal in the Division II final at the DODDS-Europe soccer championships. Doll held her goal clean against the high-scoring Wildcats until Mack converted in the final minute for the 1-0 win. (Michael Abrams/Stars and Stripes) 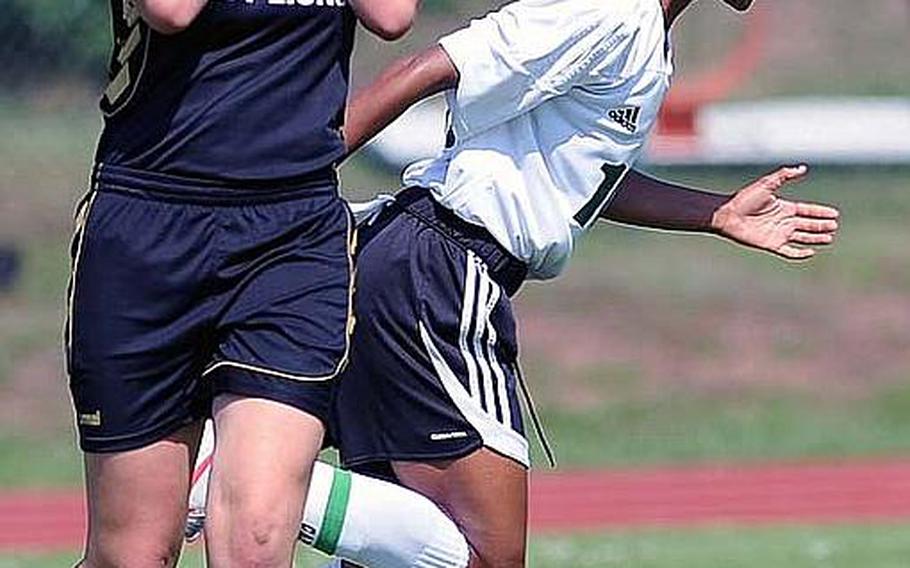 AFNORTH's Sarah Seitz holds her hands to her face in disbelief as Alexandra Mack celebrates her last-minute goal that gave Naples a 1-0 victory in the Division II title game at the DODDS-Europe soccer finals. (Michael Abrams/Stars and Stripes) 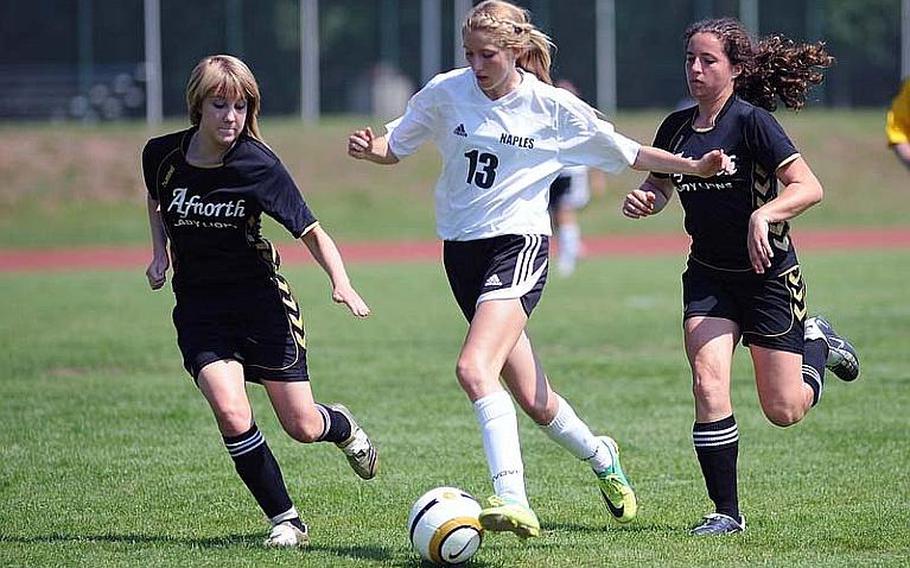 Mack was simply sensational, accounting for more than half of Naples&rsquo; 14 shots on goal. But Doll was equally as skilled, blocking shot after attempted shot. &ldquo;How did she jump like that?&rdquo; remarked someone in the crowd after Doll lunged to knock down a Mack strike one minute into the second half.

With 30 seconds left in regulation, Mack finally got one in. Naples senior Katie Waller threw the ball inside the box after an out-of-bounds kick. When the ball bounced past an AFNORTH defender, Mack placed it into the goal, out of Doll&rsquo;s reach. The score gave the Wildcats a hard-fought 1-0 victory and the team&rsquo;s third consecutive Division II title as time expired.

Mack said after the game she kicked the ball with the side of her foot, keeping in mind coach Enzo Cianciaruso&rsquo;s advice when so close to the goal among a sea of defenders: &ldquo;Take a sip of tea, stay calm and just put it in.&rdquo;

Mack and Naples sophomore forward Isabella Lucy, who also had several thwarted attempts on goal, agreed that Doll was &ldquo;impressive.&rdquo;

The praise, however, was small consolation for Doll, a senior from Moose Jaw, Canada, in her first year playing soccer for DODDS-Europe.

AFNORTH head coach Christopher Booth said the Lions were trying to hang on and push the game into overtime, where they liked their chances on penalty kicks with Doll in the goal. Doll stopped five out of six penalty kicks throughout the championship tourney, Booth said.

Booth also credited his &ldquo;whole back line&rdquo; - Maike Wagner, Nicole Telega, Hayle Stoner and Sarah Seitz - with helping to contain Naples&rsquo; high-octane offense for most of the game.

&ldquo;I don&rsquo;t think they&rsquo;ve seen a team like us before,&rdquo; Booth said of Naples. &ldquo;They&rsquo;ve beaten a lot of people by a whole lot of goals.&rdquo;