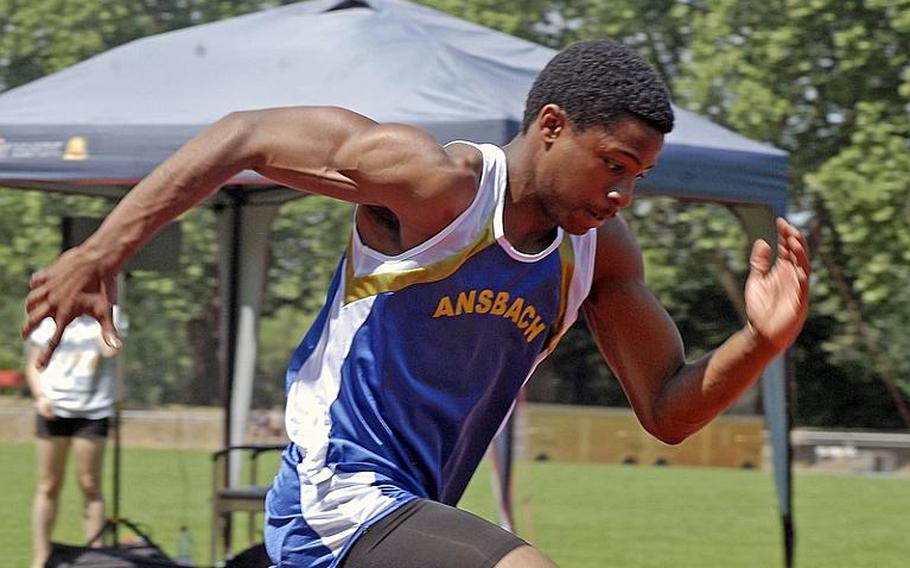 Buy Photo
Ansbach's Derrick Flake shows off his speed in the boys 400-meter dash during day two of the 2011 DODDS-Europe Track and Field Championships in Russelsheim, Germany. Flake won with a time of 50.66 seconds, and will be returning for the Cougars this season. (Mark Patton/Stars and Stripes)

Buy Photo
Ansbach's Derrick Flake shows off his speed in the boys 400-meter dash during day two of the 2011 DODDS-Europe Track and Field Championships in Russelsheim, Germany. Flake won with a time of 50.66 seconds, and will be returning for the Cougars this season. (Mark Patton/Stars and Stripes) 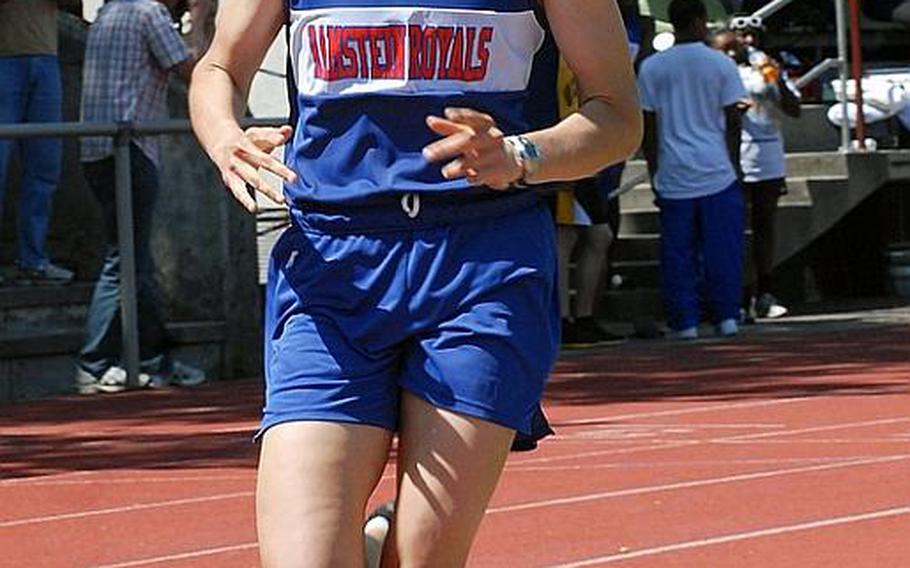 Ramstein's Jessica Kafer distances herself from the competition on her way to winning the girls 1,500 meter run at the 2011 DODDS-Europe Track and Field Championships. Kafer will be back to defend her title when the 2012 season gets under way this weekend. () 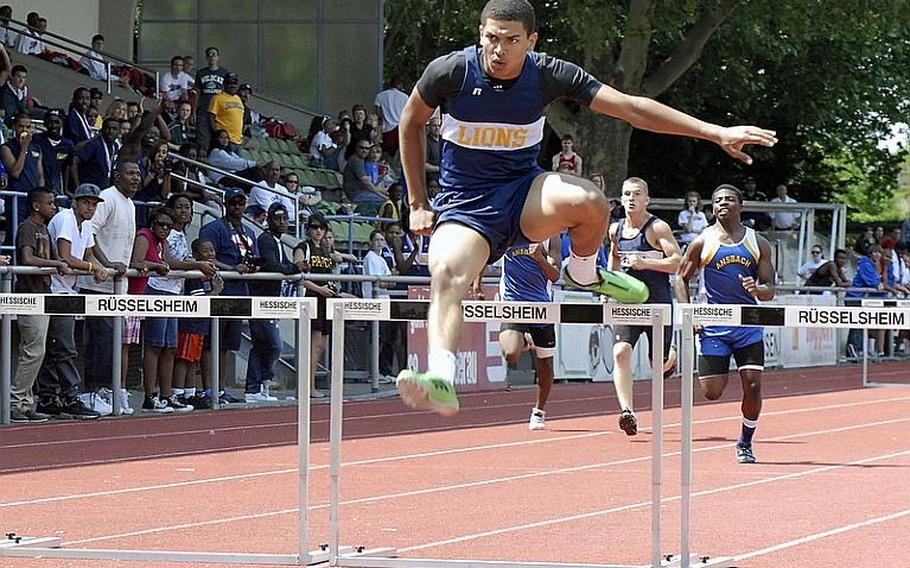 Buy Photo
Heidelberg's David Hoke heads to the finish line on his way to winning the boys 300-meter hurdles title at the 2011 DODDS-Europe Track and Field Championships in Russelsheim, Germany. Hoke will be returning for the Lions when the 2012 season gets under way this weekend. (Mark Patton/Stars and Stripes) 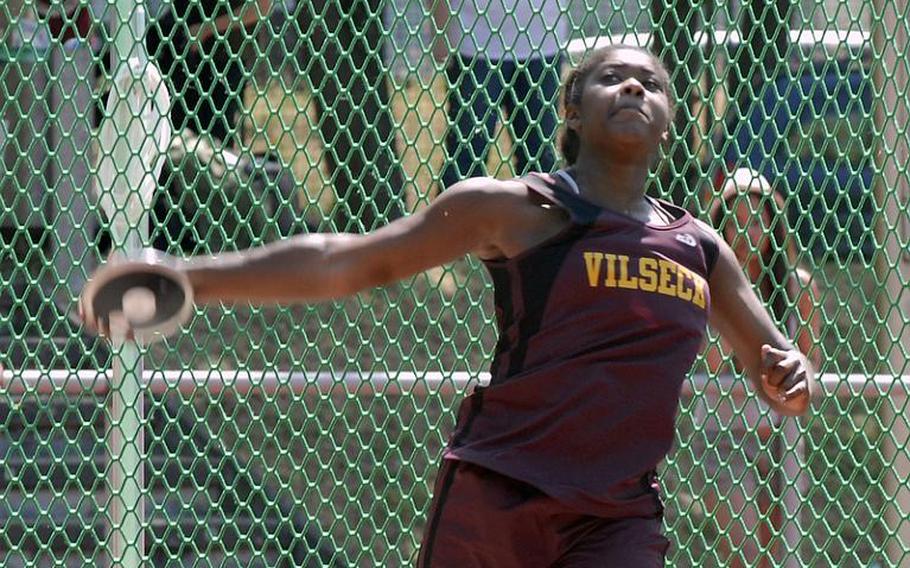 Buy Photo
Vilseck's Mariah Morris gets ready to release the discus during the 2011 DODDS-Europe Track and Field Championships in Russelsheim, Germany. Morris won the event and will be returning for the Falcons this season. (Mark Patton/Stars and Stripes)

&bull;In track and field, size really does matter: DODDS awards plaques for team champs in Divisions I, II and III, but almost all the significance in European track and field belongs to the big schools which populate D-I. In 2011, for example, D-I schools finished 1-2-3 in both the boys&rsquo; and girls&rsquo; standings. Depth made the difference, according to Bitburg coach Brian Bent, who bemoaned the fact that the school system limits individual athletes to just four events at Europeans.

&ldquo;The four-event maximum,&rdquo; he emailed in a preseason assessment, &ldquo;doesn&rsquo;t help the small schools at all.&rdquo;

Nor does the number of quality performers the larger schools can enter in the four relay events which account for just under a fourth of the total points available to each team. In 2011, for example, the Kaiserslautern girls earned 36 points from the relays alone. On the other hand, AFNORTH&rsquo;s girls, with 16, topped the relay-points total for D-II teams.

AFNORTH&rsquo;s girls and Black Forest Academy&rsquo;s boys were the highest-finishing D-II teams overall. With 46 points, AFNORTH was 51 points behind No. 1 K-town; BFA, with 35 points, finished 67 behind overall champion Heidelberg.

The situation is even worse for the small schools. No D-III girls scored, and the Brussels boys, who managed to earn four points, were 18th of the 20 boys&rsquo; teams, and the lone one from D-III, in the meet.

The situation won&rsquo;t change in 2012, even with the addition of Bamberg to the D-III field. Count on it.

&bull;There&rsquo;s gold in those 2012 hills: With the graduation of quadruple gold medalists Rio Harris of Kaiserslautern and Jasmin Walker of Lakenheath especially, champions in 11 of the 13 girls&rsquo; individual events won&rsquo;t be back to try to repeat.

In addition to those departures, two especially shocking defections stand out. Bitburg senior Kaitlyn Miller, the 2011 3,000-meter champion, has elected not to run this season, and Patch star Morgan Mahlock, who medaled at 400, 800 and 1,500 meters last season, will run exclusively with her German club this season, according to Patch coach Joshua McCall.

In the girls&rsquo; field, just two individual champs return. Jessica Kafer, the 1,500 champ, anchors a deep and talented Ramstein team, and discus champ Mariah Morris is back in the ring again for Vilseck.

On the boys&rsquo; side, the depletion of champions from last year isn&rsquo;t quite so stark. Five 2011 gold-medalists return, and defending European D-I champion Heidelberg suits up two of them &ndash; 100-meter king Andre Brown and 300 hurdles champ David Hoke. Their fellow returning gold-medalists are 400-meter king Derrick Flake of Ansbach, shot-put king Darian Billups of Bitburg, and long-jump winner Darien Cornett of Aviano.

&bull;Are K-town&rsquo;s girls on borrowed time? Perhaps the most significant development to monitor is the real possibility that nine-time girls&rsquo; Division I champion Kaiserslautern might finally move down the podium a step or two.

&ldquo;We&rsquo;ll be hard-pressed to repeat anything individually or as a team regarding championships,&rdquo; DePriest candidly admitted in a recent email. &ldquo;The bright spot is that we have a lot of young student-athletes, so maybe we&rsquo;ll be rebuilding.&rdquo;

Helping that construction project is the addition of 2011 100-meter bronze-medalist Grace Gonzalez from defunct Mannheim and the return to health of long-jumper Jada Perry, third in that event last year.

No one, however, can match Ramstein&rsquo;s on-paper and in-practice prowess.

In addition to Kafer, Will Buckley&rsquo;s Lady Royals can call on Tallie Elbert, fourth in the 400 in 2011, and 1,500-meter bronze medalist Anna Priddy.

&ldquo;The girls&rsquo; team is very strong and deep,&rdquo; Buckley emailed. &ldquo;I think they will give anyone a challenge this year for the championship.&rdquo;

&bull;Can Heidelberg&rsquo;s boys do it again? In addition to returning Brown and Hoke, along with medalists Wayne Dawkins, Jeremiah Miller and Sharaud Gillman, the Lions added 800-meter silver medalist Tyler Holderby from Vicenza and inherited sprinter C.J. Baisden from Mannheim.

Vilseck finished just five points behind Heidelberg in 2011, and Ramstein eight points farther back and should challenge again.

Ramstein packs plenty of punch in discus silver-medalist Justin Dickey; Carl Lewenhaupt, who won silver in the 3,000 and bronze in the 1,500 in 2011, and Jaap Van Gaalen, the 400 meter silver-medalist.

With Patch and Wiesbaden waiting in the wings, it should be a finals to remember, when the season&rsquo;s eight weekly meets culminate in the 2012 European championships hosted by Wiesbaden.