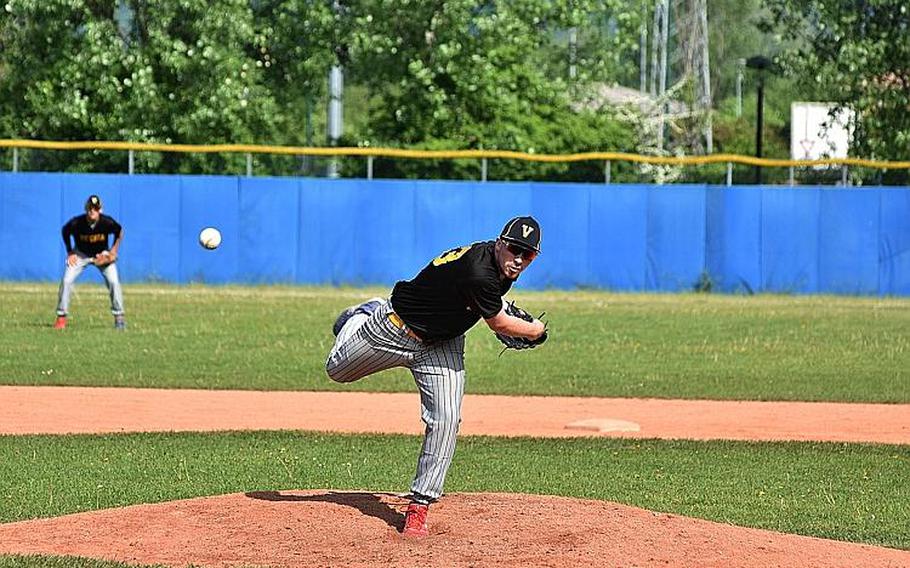 Buy Photo
Pitcher Brian Palmer and the Vicenza Cougars play host to two distant Division I opponents this weekend. The Naples Wildcats and Kaiserslautern Raiders visit Vicenza on Friday and Saturday as the scope of DODEA-Europe???s regular season continues to expand. (Kent Harris/Stars and Stripes)

The Kaiserslautern Raiders and Naples Wildcats are facing that kind of paradox this weekend as they visit the Vicenza Cougars for the kind of multiple-day, multiple-team meet that is a growing aspect of the DODEA-Europe regular-season schedule. While the travel required for those events eats into a team’s weekly practice routine, the experience derived from facing a wider breadth of opponents is invaluable.

“We are not looking forward to the commute, but we are certainly happy about playing Naples and Vicenza in the regular season for the first time ever,” Kaiserslautern baseball coach Justin Bates said. “These long trips are never easy, but they teach our players to deal with adversity.”

The road trip is by far the longest of the season for the Raiders, and in fact their first and only trip outside of their home country this spring. Kaiserslautern was the host for its set against United Kingdom school Lakenheath; last weekend’s doubleheader at Vilseck, a drive of about 225 miles, represents its longest trip aside from this weekend’s journey to Italy. The Raiders will also co-host the European tournament later in May.

Long trips are more routine for Naples. Vicenza, the Wildcats’ only Division I rival in Italy, is some 450 miles north of Naples; Kaiserslautern’s closest rival, Ramstein, is a 10-minute drive away, and Wiesbaden and Stuttgart are also manageable same-day drives away.

“When we do travel, we lose practice days because of it, so we have to do more in the three days,” Davis said. “Whereas teams that have shorter travel times can practice all week long and play on Saturdays.”

Kaiserslautern softball coach Jesse Costa, a former coach at Naples, is very familiar with that process.

“We need to get as much done as possible during the three days that we do have before we travel,” Costa said.

That sense of urgency in practice is elevated by the fact that Kaiserslautern and Naples are preparing for unfamiliar opponents this weekend.

“We only get three days of practice this week,” Naples softball coach Amy Driscoll said. “Of course that is not ideal when we are about to face a tough D-I competitor like (Kaiserslautern).”

While the lost practice time is a challenge, it’s alleviated by the increased scope of regular-season competition. And in DODEA-Europe, where every team advances to the European championship tournaments, the regular season doubles as practice for the season-defining playoffs.

“It’s always beneficial to be able to play against teams during the regular season that we might see during Europeans,” Costa said. “That way there really isn’t the unknown or a big surprise heading into the tournament.”

All told, coaches are using this weekend’s three-team meet as a motivational tool just weeks ahead of the European tournaments, which start May 24.

“It most definitely helps prepare us for what we will face at Europeans,” Driscoll said. “I think it really helps my players see how hard they need to work to assure we are ready when facing the larger D-I schools.”

“If anything, we’re practicing harder this week due to our games this weekend. I don’t think that it has as much to do with the road trip as it does with the point in the season at which we stand,” Bates said. “We know these games are important, and we want to play solid baseball to build momentum for the tournament.”