Long, winding road for Cougars in 2004 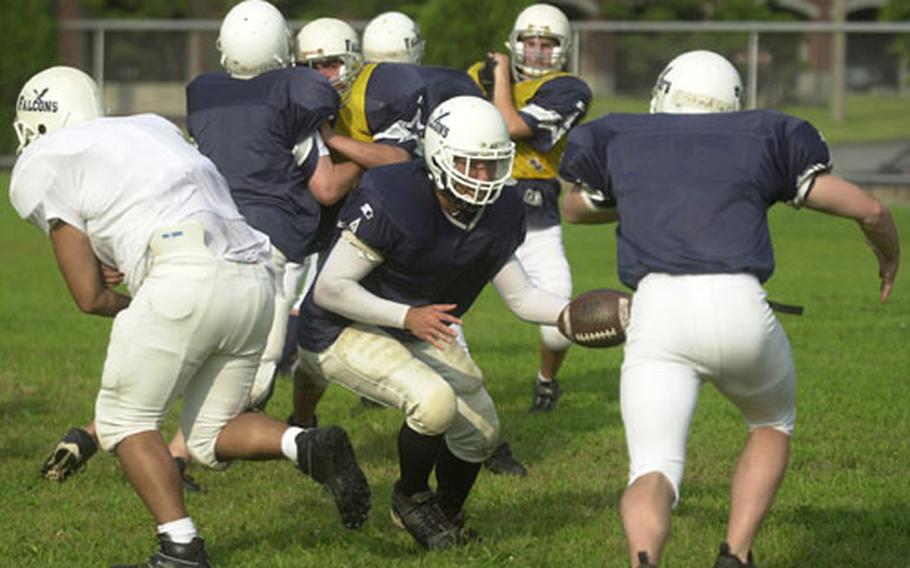 All dressed up and no football field to call their own.

That&#8217;s the situation facing the Osan American Cougars as they prepare for Saturday&#8217;s Department of Defense Dependents Schools-Korea league opener at Seoul American.

The field adjacent to Osan&#8217;s school, used by the football and soccer teams as well as the base intramural rugby, soccer and flag football squads, was closed in June for renovations. It&#8217;s the only field on the base large enough to support those sports.

The closure forces the Cougars to play their four regular-season games on the road, a situation coach Tony Alvarado described as &#8220;horrible.&#8221;

Even though, as a result, the Cougars have become the league&#8217;s road warriors, it&#8217;s a better situation than the team faced last June, when it was feared the school might not even have a football team.

A handful of meetings between football players&#8217; parents and school administrators were held last summer, and a &#8220;decision was made to support the program any way we could,&#8221; Czerw said. &#8220;We&#8217;re trying to maintain the sport with limited facilities, doing what we can.&#8221;

It was a mixed blessing, Alvarado said.

One league coach expressed sympathy for the Cougars&#8217; situation.

&#8220;No home field advantage, always having to get on a bus to go somewhere,&#8221; Taegu American Warriors assistant Ian Eddington said. &#8220;That kills you, especially the three- or four-hour bus ride down here.&#8221;

For the moment, the Cougars are preparing for their four-game season by practicing on a youth services softball field near the base&#8217;s main gate. There are no goalposts and the field isn&#8217;t lined.

They&#8217;ll also have to contend with a Seoul American Falcons squad that is riding a 16-game winning streak, dating back to the final two seasons of when the league was run by Korea&#8217;s youth services.

The Falcons, Warriors and Cougars play a double round-robin schedule. The league then puts together an All-Star team for the annual World Bowl against the Singapore American Community Action Council&#8217;s All-Star team.

The tentative date for World Bowl XII is Nov. 13, to be hosted by the league&#8217;s champion team. Singapore won the World Bowl last year, 55-6 at Singapore American School.

A significant advantage for Seoul American is drawing from a student pool of approximately 600, while Osan and Taegu American&#8217;s enrollment is much less, about 125 per school.

The question is whether Taegu or Osan can beat the big boys.

Still, not since five years ago, when Yongsan Garrison fielded split-squad teams of Seoul American players, has Yongsan lost to either Taegu or Osan, when the Yongsan Dragons fell 30-24 to the Warriors on Nov. 14, 1999.

&#8220;In all honesty, I have some guys who are going to cause our competition a great deal of problems,&#8221; Harden said of six backs, seniors Leo Pacheco, Phillippe Anglade, Kris Stadler, Woong Lee and Sam Crothers &#8212; a former Cougar &#8212; and sophomore newcomer Marcus McGhee.

The Warrior Nation, meanwhile, expects another rebuilding campaign on top of their winless 2003 season, Eddington said. Only two seniors dot the lineup, but there is a strong core of underclassmen.