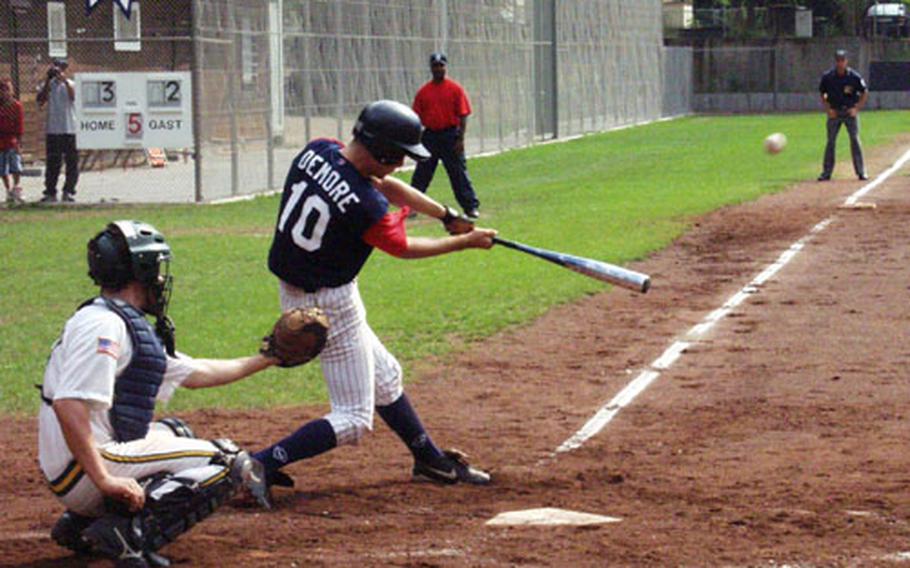 FRANKFURT-NIEDERRAD, Germany &#8212; A protest filed by Germany and co-signed by Ramstein Thursday that carried all the way to Little League Baseball headquarters in Williamsport, Pa., forced Saudi Arabia to forfeit a 6-5 victory over Ramstein in the final pool play game of the European Senior League championship for 14-16-year-olds.

Little League Baseball, Inc. ruled that Saudi Arabia had manipulated its tiebreaker status by purposefully failing to play competitively during the seventh, eight and ninth innings. The Saudis&#8217; action constituted unsportsmanlike conduct, according to the committee, which bounced Saudi Arabia, representing the Arabian-American Little League of Dharan, from the title-game berth.

The ruling means that Germany, representing the Rheinland Little League of Frankfurt, will take on Russia at 3:30 p.m. Friday to see which team will represent Europe in the Senior League World Series in Bangor, Maine, Aug. 10-16.

Chris Hemler&#8217;s sacrifice fly to center field scored Wandi Olabisi from third base in the top of the 13th inning, giving Saudi Arabia a 6-5 victory over Ramstein and putting it in a three-way tie with Germany and Poland for second place in pool play.

&#8220;Little League rules specify that ties will be broken first by head-to-head results,&#8221; tournament director Bill Dickman said. &#8220;Unfortunately in this case, everyone beat everyone else, so the second tiebreaker is by a &#8216;runs-allowed ratio.&#8217; The ratio is derived by dividing the number of runs allowed by the number of half-innings a team plays on defense.&#8221;

Germany and Poland concluded pool-play on Wednesday, with Poland compiling a 1.06 runs-allowed ratio and Germany a .77.

&#8220;Before this game [Saudi Arabia-Ramstein], Arabian-American had a ratio of .92, which meant that had the game gone seven innings, and Saudi Arabia had kept Ramstein under two runs, they would&#8217;ve lowered their ratio enough to catch Germany,&#8221; Dickman said.

Saudi Arabia tied the game in the seventh on Dustin Deming&#8217;s RBI double and a two-out infield single by Dusty French.

Some of what the fans saw was Saudi center fielder Olabisi waving weakly at three straight pitches from Ramstein starter Patrick Modrovsky to open the eighth. Modrovsky then sandwiched strikeouts of Edward Moore and Hemler around a single by Brian Slattery.

In the ninth, Saudi right fielder Tom Holland hit a ball deep over center fielder Jardine&#8217;s head, but Holland stopped to admire the blow as he jogged to first and settled for a double. He was then thrown out trying to steal third.

Did &#8220;playing under the rules that were there&#8221; mean Griffith sought to prolong the game intentionally?

Pinske protested Griffith&#8217;s move to Dickman, who referred the matter to Little League headquarters in Williamsport, Pa. Even though it was 6 a.m. in Pennsylvania, Dickman said headquarters got to work immediately. More than five hours later, officials in Williamsport upheld the German protest.

Pinske said he protested because Saudi&#8217;s tanking struck him as violating the spirit of Little League Baseball.