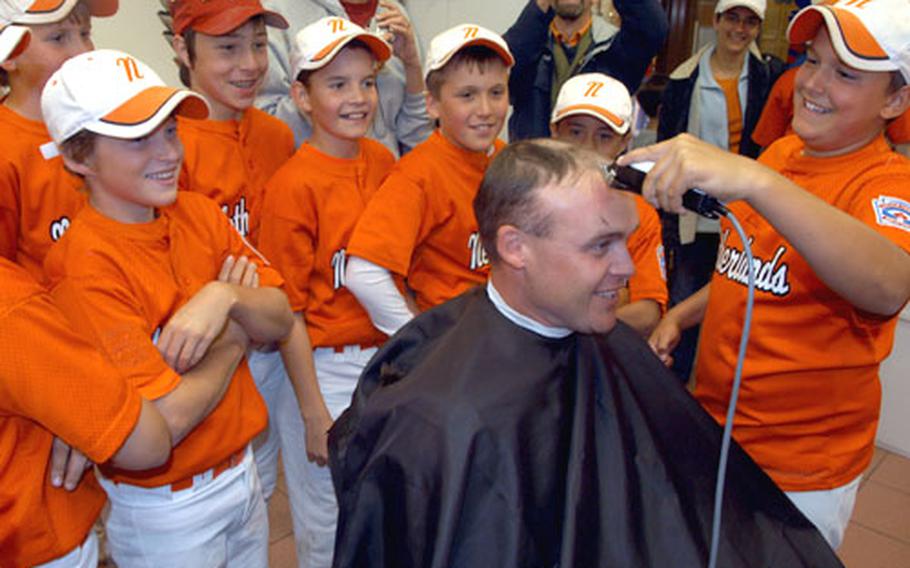 Pitcher Jacob Reynolds of the Brunssum-Schinnen, Netherlands, team (right) shaves the head of assistant coach Ronnie Christopher on Tuesday. Reynolds won the bet for walking only one batter in Netherlands’ 2-1 loss on Tuesday to Naples, Italy in the Trans-Atlantic Regional tournament played in Vilseck, Germany. (Charlie Coon / S&S)

Pitcher Jacob Reynolds of the Brunssum-Schinnen, Netherlands, team (right) shaves the head of assistant coach Ronnie Christopher on Tuesday. Reynolds won the bet for walking only one batter in Netherlands’ 2-1 loss on Tuesday to Naples, Italy in the Trans-Atlantic Regional tournament played in Vilseck, Germany. (Charlie Coon / S&S) 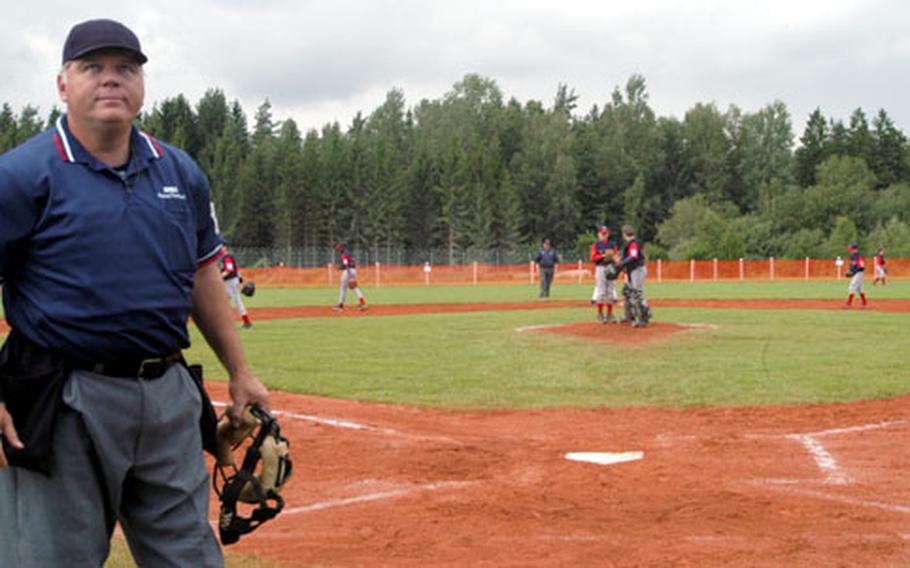 Umpire Jerry McKissack said he met his fiance, Pam, during an umpires&#39; meeting on the back hatch of his pickup truck after a game in Westminster, Calif. The two plan to get married at first base on that field, where McKissack had umpired that day. (Charlie Coon / S&S)

VILSECK, Germany &#8212; Even though the team from Brunssum-Schinnen, Netherlands, didn&#8217;t win a game in the Trans-Atlantic Regional, their season ended on a high note.

Sure, on Tuesday they lost their finale 2-1 to Naples, Italy. Netherlands pitcher Jacob Reynolds, a left-hander, kept the Naples hitters off balance for most of the game but was dinged for a couple of manufactured runs in the fourth and fifth innings.

Naples scored the winner by bunting, taking second on a throwing error, moving to third on a bunt and scoring on a grounder.

But Reynolds was told before the game that if he didn&#8217;t walk anyone, he would get to shave coach Ronnie Christopher&#8217;s head. Reynolds struck out four and walked only one.

So Christopher gave in and let Reynolds, his young left-hander, shave his head at the Vilseck barber shop as the team looked on.

If the teams who played in the Trans-Atlantic Regional were busy, imagine how the umpires felt. There were only six of them, and paid their own way to Vilseck.

The volunteer umps worked an average of 12 games each during the first six days of the regional.

McKissack, became an umpire 16 years ago because his sons played baseball, has been to the pinnacle of Little League in Williamsport, Pa.

In 2002, McKissack, an engineer who works for Raytheon, was the home-plate umpire and wore a &#8220;mask-cam&#8221; for the televised U.S. semifinal game between Harlem, N.Y., and Worcester, Mass. A few days later, he served as umpire on the left-field line in the championship game.

Considering the weather, the games in Vilseck felt more like the Fall Classic than the dog days of August. The temperature topped 60 degrees only on the rare times the sun peeked out from the clouds that dominated the sky.

At least one game was played with temperatures in the 40s, and numerous delays were caused by cold rain. For the Arabian-American contingent that traveled from Dhahran, Saudi Arabia, it must have seemed like winter.

The Arabian-American players, who are the sons of U.S. employees from the Saudi Aramco oil company, weren&#8217;t adversely affected, winning all six of their games heading into Wednesday&#8217;s semifinals. As their fans sat huddled on the bleachers in scarves and long-sleeved hooded sweatshirts, the players played in their shirt-sleeves.