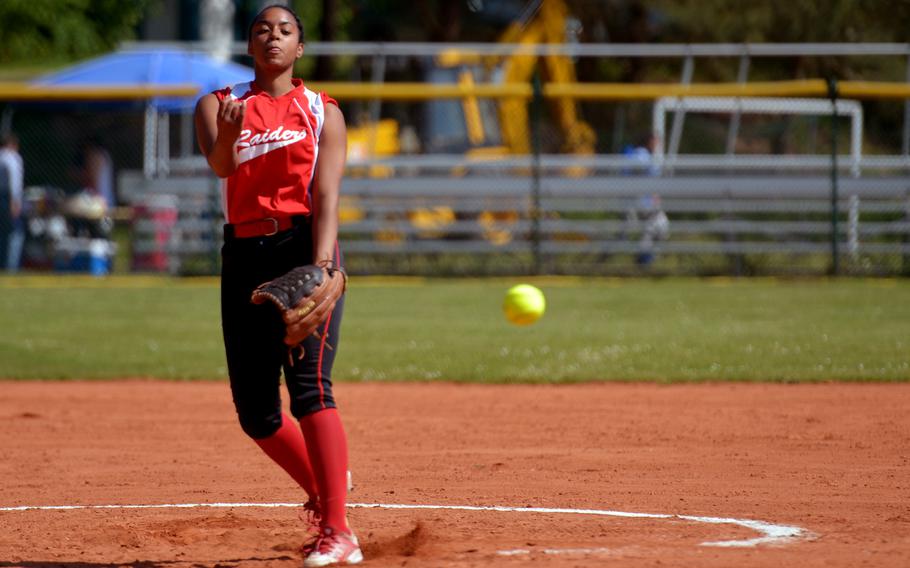 Kaiserslautern's Tori Liggins throws a pitch in a game against Vilseck on opening day of the DODEA-Europe softball championships in Ramstein, Germany, Thursday May 26, 2016. Liggins has been selected as Stars and Stripes Athlete of the Year for softball. (Michael Abrams/Stars and Stripes)

Football is often, and somewhat erroneously, referred to as “a game of inches.”

Sure, inches add up to the necessary yards, but rarely does a game of football hinge on actual inches. However, in baseball – and by extension softball – nearly every game does.

A runner just beating the tag at home plate. A game-winning run coming in off a ball batted just out of reach of an outfielder. A third called strike that ends a game. These are the inches ball players, both amateur and professional, live and die by.

Nowhere is this more pronounced than the inches that separate a decent pitcher from an all-star. And nowhere in DODEA-Europe is this more on display than in the pitch mastery of Kaiserslautern’s ace pitcher – and Stars and Stripes 2016 softball Athlete of the Year – Tori Liggins.

Liggins has such control from the mound that coach John Culbreth had to be quite specific when asked about her best pitches. Some coaches could only respond with “fastball” or “she has a heck of a change-up.” With Liggins, Culbreth had the luxury of being much more precise; “dropball, outside corner.”

“When she first started a few years ago she had never pitched before,” Culbreth said. “We’re talking about the total evolution of a pitcher in two years and that can’t be done unless they’re willing to work.”

And work, Liggins did. As a sophomore she made the All-Region squad. As a junior she went 7-3. Good achievements, but ones absolutely dwarfed by the season she put together this year.

“I like to get better and improve myself all the time,” she said. To that end, she said she put extra time into perfecting her craft each off season.

And time away from softball developing a craft as well. The soon-to-be-departing senior chalked up a 3.6 GPA while also becoming a certified nursing assistant and working shifts at the Landstuhl Regional Medical Center.

“I think it’s great to have experience before you actually go into the field, to make sure that’s what you definitely want to do,” she said.

Liggins finished her finals Friday and will spend her remaining time in Europe taking a breather from her busy schedule. In just a few short months, she’ll be fully immersed in her new life as a physical therapy student at the University of Toledo, Ohio.

She isn’t sure if she’ll continue playing ball while there, but said she’ll always remember her time as a Raider.

“It’s been amazing…the relationships that you build over the years with your teammates and they become like family is amazing,” she said. “I couldn’t have done it without them because you can’t pitch if you can’t trust your field.”