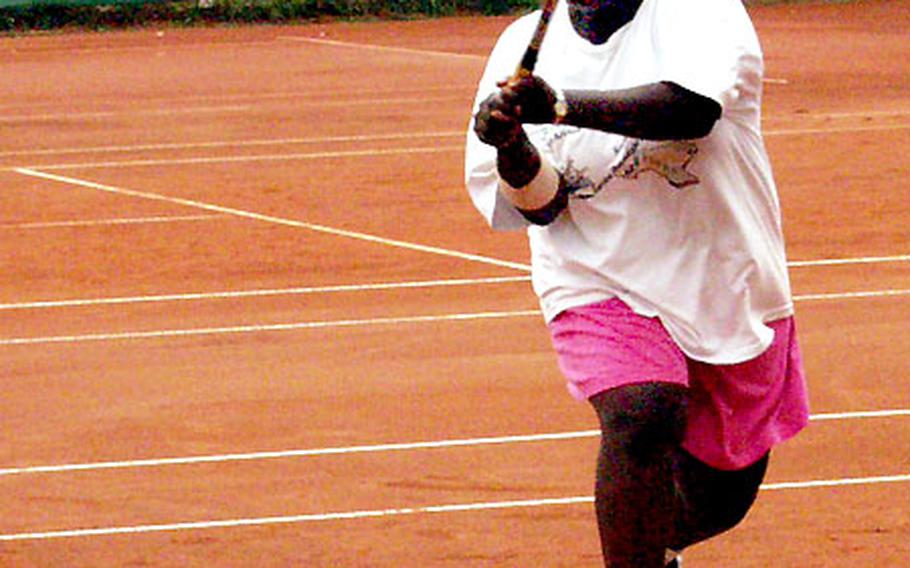 HEIDELBERG, Germany &#8212; Not even a lengthy rain delay Sunday could keep Heidelberg&#8217;s Philisa Legrier from her appointed rounds in the 2003 U.S. Forces- Europe tennis championships.

Forced to sit an extra 70 minutes between her singles and doubles matches while a shower soaked the clay courts at the Heidelberg Tennis Center, Legrier matched the singles title she won Sunday morning by teaming with Yolanda Mason to earn the doubles title. Both victories were in straight sets.

Although the former West Georgia University player was referring to her singles match, she might as well have been predicting her doubles showdown, too. She and Mason downed 2003 mixed doubles champ Leah Creiglow and former two-time European high school doubles champion Alison Pineta 6-0, 6-3.

Legrier&#8217;s high-velocity strokes didn&#8217;t fail her in doubles, either. Legrier blasted winners to close out the first four games of the first set as she and Mason allowed their foes five total points during the stretch.

It was Game 6 before Creiglow and Pienta, a former Heidelberg High School star who now plays recreational tennis at Holy Cross, even forced a deuce game.

Things improved for the runners-up, who embraced after finally holding Pineta&#8217;s service in the second game of the second set. Legrier answered that by serving the winners to 2-1 at love. Two service breaks followed before Pineta held again to get the set back on service at 3-3.

But Legrier and Mason took charge and closed out the set in three straight games.

The victory allowed Legrier, who plans to defend her USFE titles at least twice, to join a pair of SHAPE stars who claimed singles and doubles titles on Sunday.

Jeff Rice defeated Dennis Kirstein of Mannheim 6-4, 6-3 to retain his masters crown for players 40 years of age and older, and then teamed with seniors titlist Doug Whitney to win the men&#8217;s doubles crown by default. The forfeit came about when Darmstadt&#8217;s Roy Tannis, Saturday&#8217;s open singles champion, was unable to play on Sunday.

Rice, the defending masters champion, wasn&#8217;t as impressed with his performance Sunday as his opponent was.

That was news to Kirstein.

Creiglow salvaged something from the day by teaming with Jim Matosek to win the mixed doubles title 6-3, 6-4 over Peter and Maria Williams.