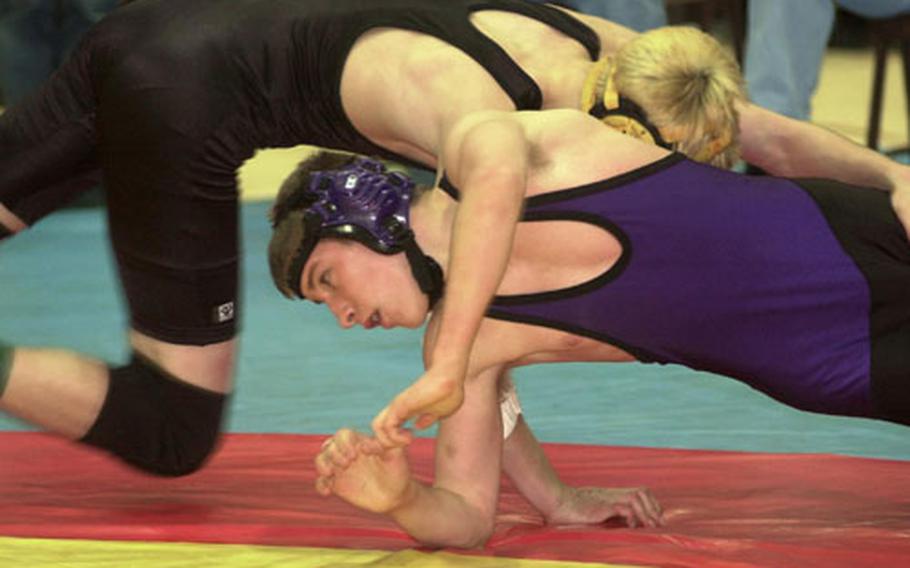 Würzburg&#39;s Jesse Painter (right) tries to get away from Patch&#39;s Joe Morrow during their 125-pound winner&#39;s bracket semifinal match at the Wolfpack Holiday Classic &#39;03 at the Kessler Fitness Center in Schweinfurt, Germany. Morrow won the match, 7-6. (Raymond Conway / S&S)

SCHWEINFURT, Germany &#8212; A pair of runners-up from last season&#8217;s European wrestling tournament established their credentials for the 2003 season Saturday during the semifinals of the Wolfpack Holiday Classic.

Results of Saturday&#8217;s finals were unavailable at press time.

The annual Wolfpack event brings together a broad field of wrestlers and is seen as an early-season litmus test, according to Hanson.

Weaver&#8217;s victory over Cacal was his second match of the day and his second over the Heidelberg wrestler this season.

He did more than that, according to Weaver, a two-time European runner-up.

There might not be a third match between two, however. Weaver said he is contemplating dropping to 140 for team-point purposes at next month&#8217;s Europeans.

The Europeans are in the back of Hanson&#8217;s mind, too. He said his status as a 135-pounder hinges on a common dilemma for wrestlers.

Hanson&#8217;s victory was his second of the day, and despite going the distance, he would have like a bit more.