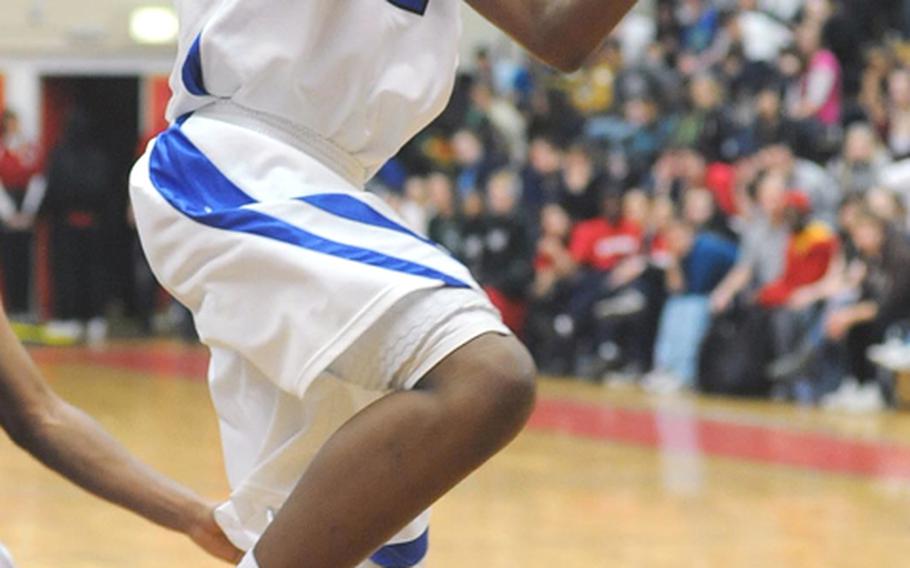 Rota's Trevon Owens soars to the basket to score in Rota's 56-40 win in last season's DODDS-Europe Division III boys basketball title game against Sigonella. Owens is one of two returning first-team All Europeans and is expected to lead Rota's charge to another title. (Michael Abrams/Stars and Stripes)

Judging from the first few games of the new boys basketball season, several of last year&rsquo;s challengers appear in good shape to make a move to the top &mdash; or to stay there &mdash; when the 2011 European championships are played Feb. 23-26.

As the schools pause for the holidays, 2010 Division I runner-up Heidelberg and D-II bronze-medalist Bamberg are unbeaten and look to have talent enough to continue their winning ways.

Heidelberg (4-0), which fell to Ramstein 65-63 in last season&rsquo;s title game, is clicking under new coach Ron Merriwether. All four victories have come against D-I opponents by an average margin of 31-plus points.

Bamberg has played just once, a 53-44 victory over visiting Mannheim on Dec. 3, but the Barons appear to possess an enviable mix of experienced scorers and inside presence.

The Division III title game could well feature a rematch. Defending champion Rota is all but certain to be in the title game against 2010 runner-up Sigonella, judging from early returns.

Division I: Heidelberg has a returning All-Europe star in 6-foot guard Eugene Jones and gets scoring from all over the floor. The Lions already hold victories over two-time defending champion Ramstein, where All-Europe guard Thomas Amrine is leading the Royals&rsquo; quest for the three-peat, and Kaiserslautern. They pose the biggest challenge, on paper, at least, to Heidelberg&rsquo;s eighth European crown since 2000.

Merriwether &mdash; who won consecutive titles in 2006-07 at defunct Giessen &mdash; isn&rsquo;t counting any chickens. Ramstein remains a threat despite the graduation of All-Europe guards Dillon Wadsack and Michael Wallace, who helped guide the Royals to victories over Heidelberg in the past two title games.

&ldquo;Ramstein is the defending champs and although it&rsquo;s a new season, Andrew (Ramstein coach Andy O&rsquo;Connor) and what he has done the past two years cannot go without recognition and respect,&rdquo; Merriweather wrote in a recent e-mail.

O&rsquo;Connor thinks the holes in his backcourt can be filled.

&ldquo;We have four guards &mdash; Thomas Amrine, Jarrod Henry, Kenrick Ellis and DeVonte Allen &mdash; who have been playing in my system &hellip; three to four years now,&rdquo; he wrote in an e-mail, &ldquo;so, hypothetically, we have the players to replace Dillon and Mike. All have put in endless hours of work in the offseason, so now it&rsquo;s just a matter of asking themselves, &lsquo;Do I really want this?&rsquo;&thinsp;&rdquo;

Division II: Like Ramstein, Aviano (4-0 against two courtesy-rule opponents) is a two-time defending champ. But the Saints are retooling this season, according to coach Ken McNeely.

&ldquo;Aviano is in a rebuilding year,&rdquo; McNeely wrote in an e-mail this week. &ldquo;The young players are developing very well, and with time should become a completive team as the season develops.&rdquo;

They&rsquo;ll have to be, if the Saints expect to pull off the three-peat. Hohenfels, the 2010 runner-up, hasn&rsquo;t played yet due to snow-outs, but the Tigers return All-Europe guard Jamie Tompkins.

Then there&rsquo;s Bamberg. The Barons suit up scoring and ball-handling punch in Javonte Knuckles, Quadel Webb and Brandon Wright, and a budding inside presence in 6-5 sophomore Terry Williams.

And they are led by a coach who knows how to win: Tim Smith led defunct Hanau to European crowns in 2004, &rsquo;05 and &rsquo;06.

Unlike Aviano, the Tigers and Barons benefit from playing against D-I teams Heidelberg, Patch and Vilseck in Region III play.

Other D-II contenders include Naples (4-0) and Black Forest Academy (2-0).

Division III: Led by All-Europe junior Tre&rsquo;von Owens, who spent his summer playing for the Atlanta-based Southern Kings Nike Elite travel team, Rota has to be the favorite to repeat. But don&rsquo;t start engraving the trophy just yet, advises coach Ben Anderson.

&ldquo;Sigonella (4-0) has many great athletes,&rdquo; Anderson wrote in an e-mail, &ldquo;and one of the best players in DODDS-Europe in Larry Stevenson. Brussels (4-1) has a five-man (Braden Brower) who can probably play in college one day if he keeps progressing &hellip; Menwith Hill (0-2, both at Brussels) has (point guard) Chris Jackson back&hellip;(He) is really tough to match up with&hellip;

&ldquo;It should be an exciting year in Division III.&rdquo;

The excitement in all divisions resumes Jan. 7-8 with a light schedule, then a full slate of games the following weekend.