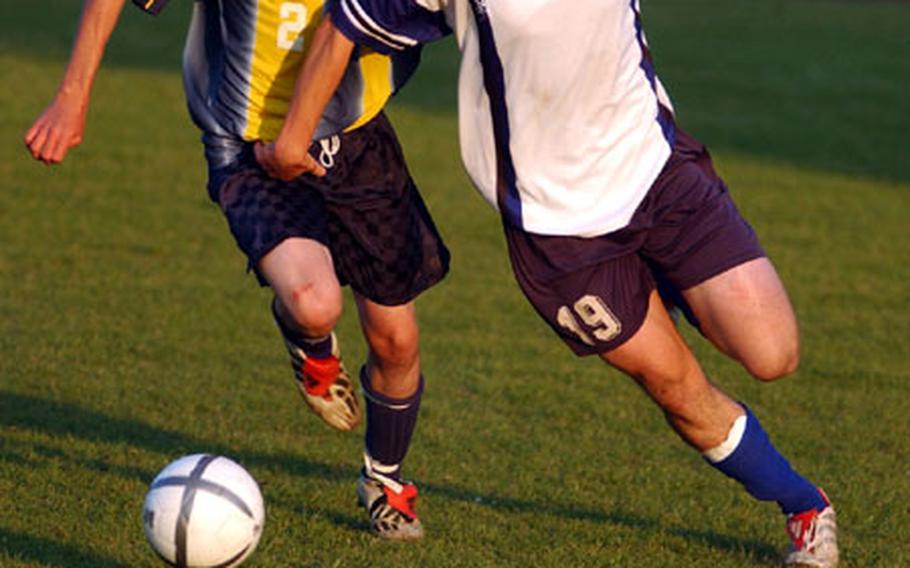 RAMSTEIN AIR BASE, Germany &#8212; The Heidelberg Lions won their eighth straight European Division I soccer championship Saturday night partly because they had won the previous seven, both coaches agreed.

Heidelberg junior Kevin Thorne rocketed a shot just under the crossbar with a minute to play in regulation to give the Lions a 1-0 title-game victory over the Wiesbaden Warriors. It was the kind of clutch plays the Lions have called on to pull out more than one championship in their current eight-year cycle.

The game-winning goal came when Thorne finally found himself running into space in front of the Wiesbaden penalty box for practically the first time all game. Freshman midfielder Jack Smrekar fed him the ball from across the field in full stride with the aplomb of a veteran.

Heintzman cited Smrekar as an example of one reason the Heidelberg program is able to excel: an influx of talented players.

&#8220;He&#8217;s going to be one tremendous soccer player,&#8221; Heintzman said of Smrekar, adding that many of his players benefit from local expertise.

Arcila said his team, which was playing without standout Cooper Bryant because of a knee injury suffered before the European tournament and had Pangrazzi at &#8220;half-strength&#8221; after the burly back-liner was injured during the tournament, still was convinced it could beat Heidelberg, especially after the way the Warriors had rallied the previous night against Lakenheath.

Trailing 2-0 Friday, Wiesbaden tied the game in regulation and advanced by winning the second five-player shootout.

There was no blowout on Saturday.

The pressure game worked perfectly until Pangrazzi had to leave the game with 12 minutes left.

The one that Smrekar and Thorne exploited.