Larry was consistent leader until it came time to change 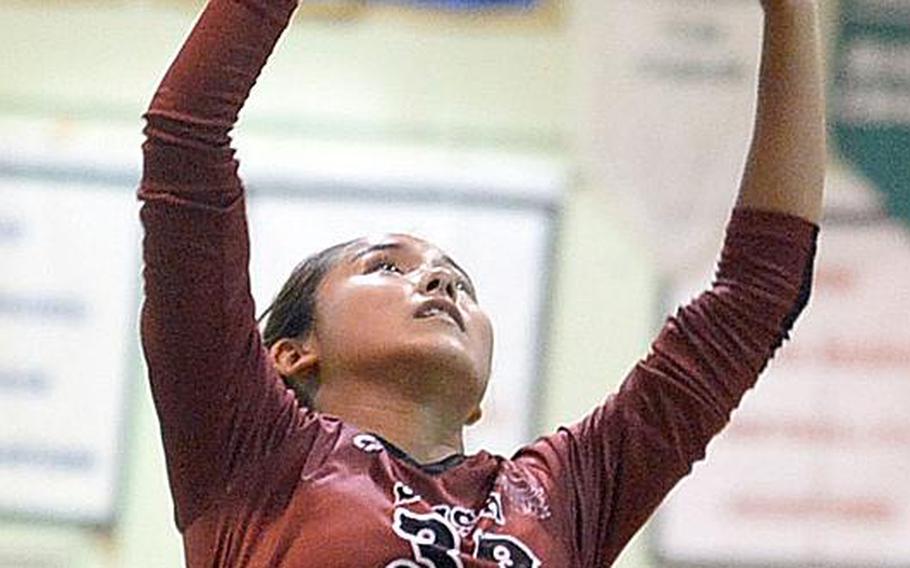 Buy Photo
An adjustment in setting technique got senior Mimi Larry and her Kubasaki teammates back in gear as they dethroned Seisen for their fourth Far East Division I Tournament title in five years. Larry had 43 sets in that match. (Dave Ornauer/Stars and Stripes)

CAMP FOSTER, Okinawa – Kubasaki was in trouble in the Far East Division I Tournament finals against defending champion Seisen.

Mimi Larry, normally a soft-spoken, calm and cool one, was angry. She had been whistled for carrying or lifting violations throughout the first set.

And it threw her off her game as well as her teammates.

“I was really frustrated; I didn’t know what to do,” Larry said. “I didn’t want to let them (teammates) down. I felt like it was my fault.”

Could she try to bump set? That would be OK, except the sets would be hard for the outside hitters to do anything with. And they couldn’t utilize any of their quick middle plays with her bump setting.

With the Dragons trailing by 12 points in the second set, coach Mike Hogen spent a time out – and then came the moment that Hogen said was one of the top moments in his 10 years of coaching the Dragons.

“I asked her if she could change her delivery right now” Hogen recalled. “She said yes. That she had the ability to change her technique in the middle of a match. And she told the team that we were going to win now, that everything was OK now.”

The Dragons had gone unbeaten the entire regular season, and only lost one set, in Far East D-I pool play to American School In Japan, when they arrived at that moment.

Along the way, Larry, one of only two four-year starters for Hogen in those 10 seasons, was named the tournament’s Most Valuable Player. She averaged 8.16 assists per set and had 43 in the match against Seisen, and also averaged 2.38 digs per set.

That championship match was the capper, Larry said, to a season that truly had begun, she said, with the third-place match in the 2017 Far East tournament. Kubasaki won that one and, Larry said, the Dragons as a team “could not wait” for the next practice come August.

“She cares so much about how the team feels,” Hogen said. “She wants the team to do well, to feel good, be satisfied and have good camaraderie. It was a good process, a good journey.”

Now that it’s over, “it doesn’t feel like it’s over,” Larry said, “that I’ve finally finished four years of playing here.”