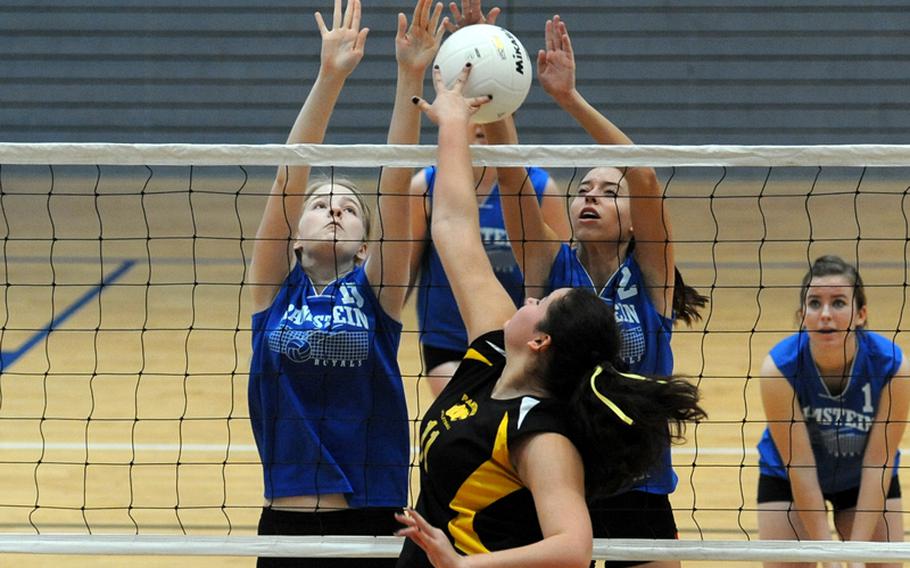 Buy Photo
Patch's Michelle Billeaud tries to get the ball over the net against the defense of Ramstein's Megan Hawkins, left, and Cayla Turain. Defending champion and second-seeded Ramstein beat seventh-seeded Patch 25-15, 25-27, 25-20 in Division I action at the DODDS-Europe volleyball championships in Ramstein on Thursday. (Michael Abrams/Stars and Stripes)

Buy Photo
Patch's Michelle Billeaud tries to get the ball over the net against the defense of Ramstein's Megan Hawkins, left, and Cayla Turain. Defending champion and second-seeded Ramstein beat seventh-seeded Patch 25-15, 25-27, 25-20 in Division I action at the DODDS-Europe volleyball championships in Ramstein on Thursday. (Michael Abrams/Stars and Stripes) 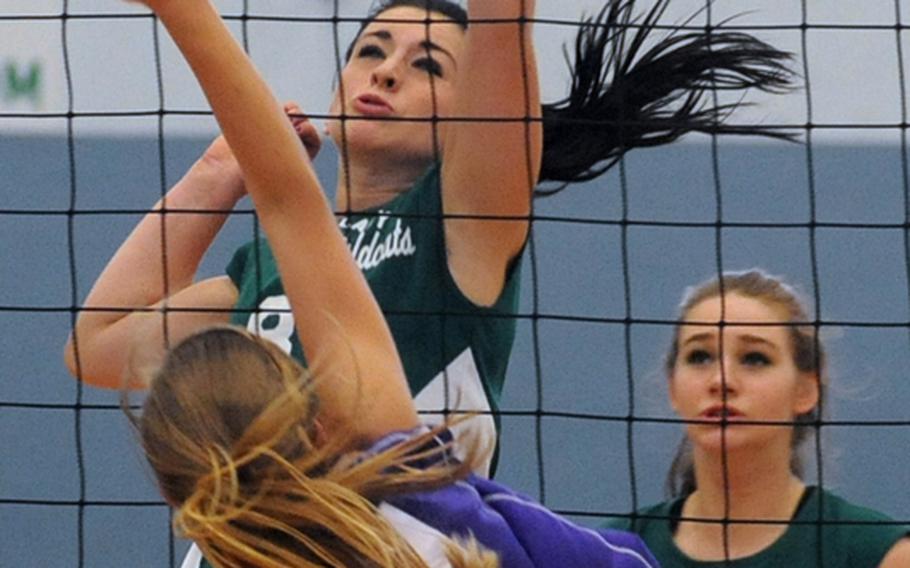 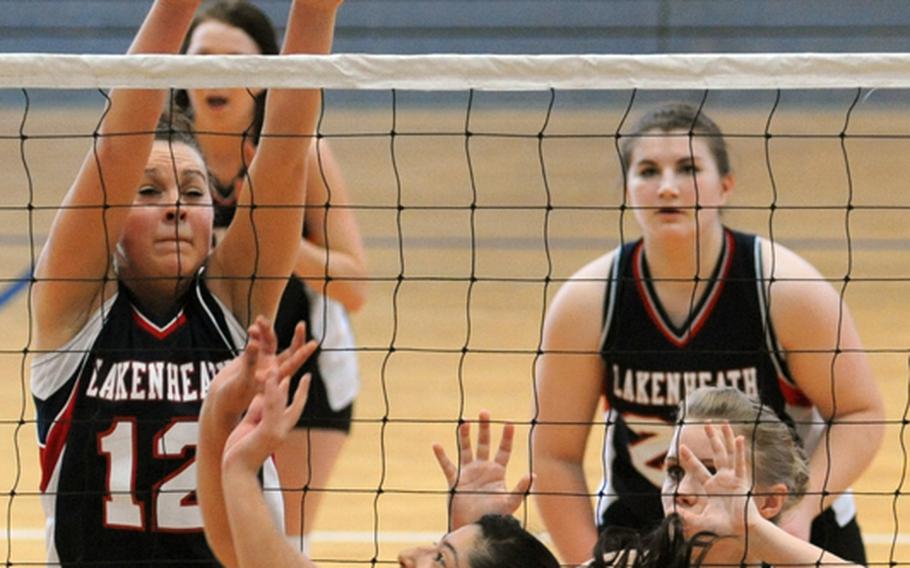 Buy Photo
Heidelberg's Rebecca Luna sets the ball in front of Lakenheath's Kelli Fleming, left, and Tiffany Truesdell, defending at the net. Top-seeded Heidelberg won the Division I match against the eighth seed 25-11, 25-23 at the DODDS-Europe volleyball championships. (Michael Abrams/Stars and Stripes) 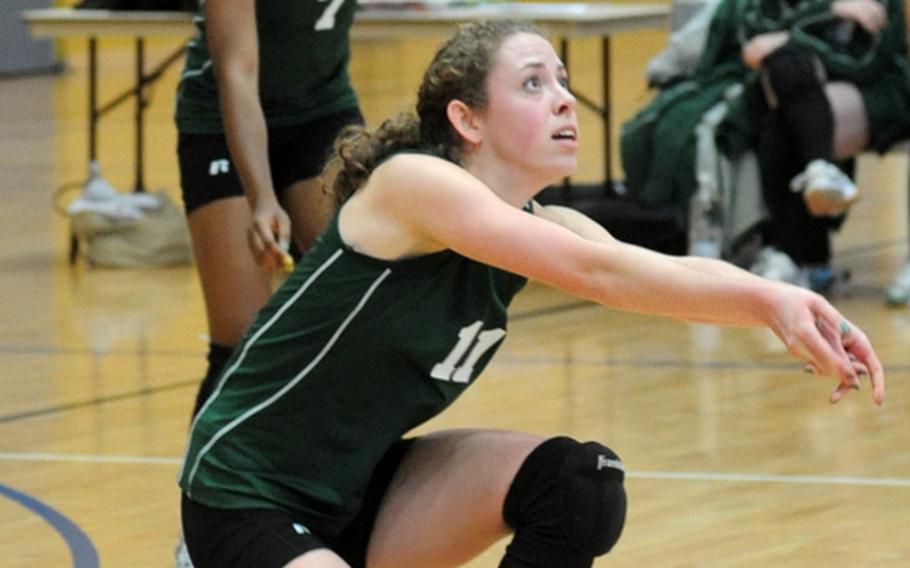 Buy Photo
SHAPE's Elizabeth Cowther, watched by teammate Paris Johnson, gets under a Wiesbaden serve in their Division I match at the DODDS-Europe volleyball finals in Ramstein. SHAPE won 11-25, 25-14, 25-13. (Michael Abrams/Stars and Stripes) 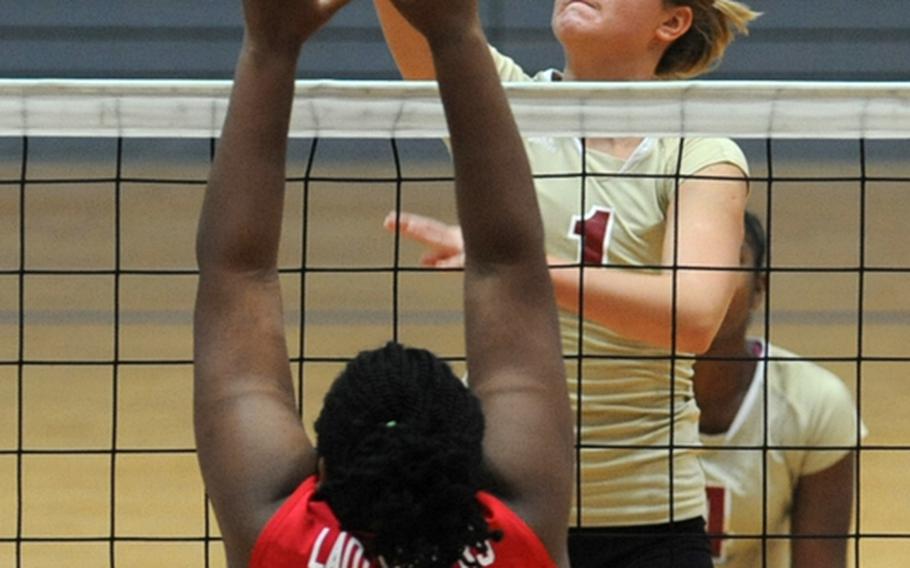 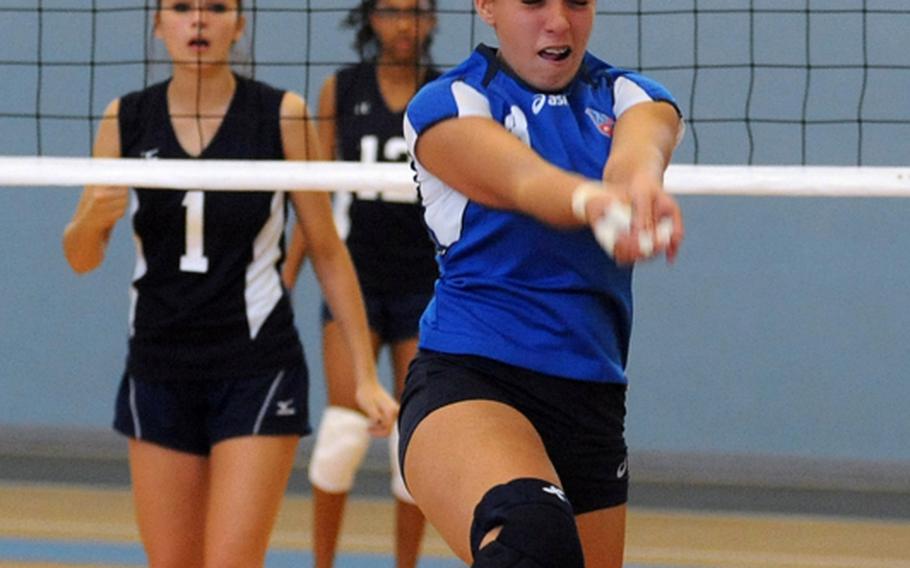 Buy Photo
Milan's Veronica Spagnoli makes a running, back-to-the-net return of a Bitburg shot in Milan's three-set win over the Barons in Division II action Thursday at the DODDS-Europe volleyball championships on Thursday. Watching the action at left is Bitburg's Jade Robbins. (Michael Abrams/Stars and Stripes) 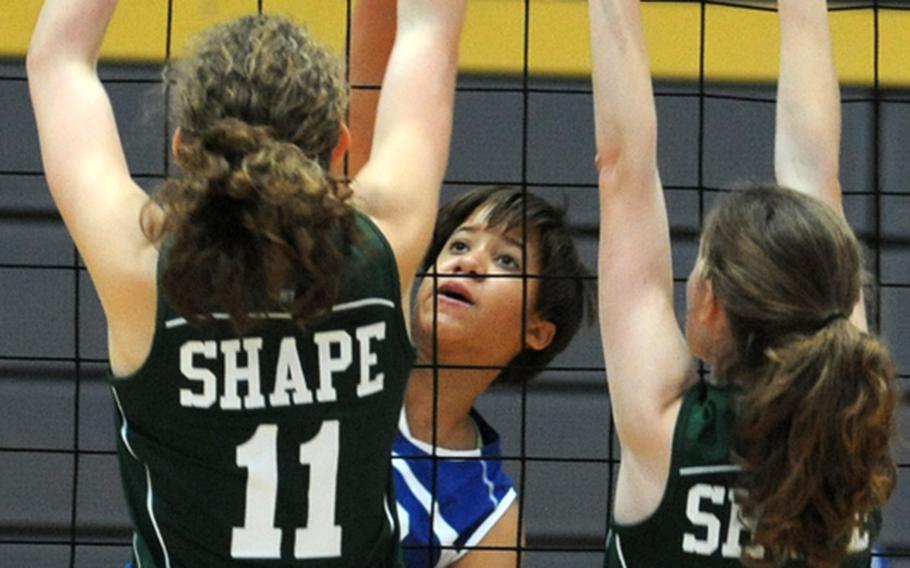 That was particularly true in Division I, which was expected to be the most wide-open event in years when both the No 1 and No. 2 seeds went 1-1 in early play.

Vilseck and No. 4 SHAPE each went 2-0 in the early going to take the lead in the round-robin standings, which eventually will determine which two teams play in Saturday&rsquo;s Division I championship game.

Vilseck was to close out Thursday&rsquo;s schedule with an evening game against Wiesbaden; SHAPE which downed Wiesbaden 27-25, 25-14 Thursday morning, was to face Heidelberg in its late game.

Things went more according to plan in the pool-play event being used to determine the D-II champion.

Vicenza, top-seeded in its pool, made short work of familiar foe Marymount International School of Rome, 25-9, 25-23, before taking on a Mannheim squad it hadn&rsquo;t seen during the regular season.

&ldquo;It&rsquo;s kind of hard playing a team you haven&rsquo;t played before,&rdquo; said junior middle blocker Danielle Ellis, &ldquo;because you don&rsquo;t know where the spots are. You have to adjust as you go along.&rdquo;

By &ldquo;spots,&rdquo; Ellis said she meant holes or weaknesses in the opposition defense. And Vicenza wasn&rsquo;t the only one looking for holes. Mannheim&rsquo;s Lady Bison exploited the ones they detected in Vicenza&rsquo;s scheme to pile up 12 unanswered points en route to their second-game victory.

Eventually, however, Vicenza found the most spots.

Aviano, the top seed in Pool B, came through when it mattered in its second game, fending off Bamberg 25-8, 29-27.

Bamberg had three chances to force Game 3, but placed consecutive serves into the net when they were tied at 24-24 and and up 26-25.

With the score in Aviano&rsquo;s favor at 28-27, sophomore AnnMarie McClelland put her service in play, and scored the winning point when her dig attempt cleared the net and dropped onto the floor at the feet of three Bamberg defenders.

&ldquo;It&rsquo;s much more nerve-wracking,&rdquo; McClelland said of serving with the match on the line. &ldquo;I told myself it&rsquo;s just like any other serve.&rdquo;

Aviano followed that triumph with a late 25-18, 25-12 conquest of Italy rival Naples.

Two-time defending champion Black Forest Academy, a No. 3 seed this year, kept pace with victories over Milan and Baumholder.

In Division III, also a pool-play event, the top-seeded Rota team, which veteran coach Judy Scarbrough earlier characterized as the best she&rsquo;s had in Spain, rolled through its first two foes. The Lady Admirals downed the International School of Florence 25-7, 25-14 and Incirlik 25-11, 25-14.

Friday&rsquo;s action begins at 8:30 a.m. at Ramstein Southside, Vogelweh and Kaiserslautern High School and concludes with the D-II and III semifinals.

Championship games are scheduled for Ramsteion Southside, beginning at 11:30 a.m., on Saturday.