Lancer girls soar to the top 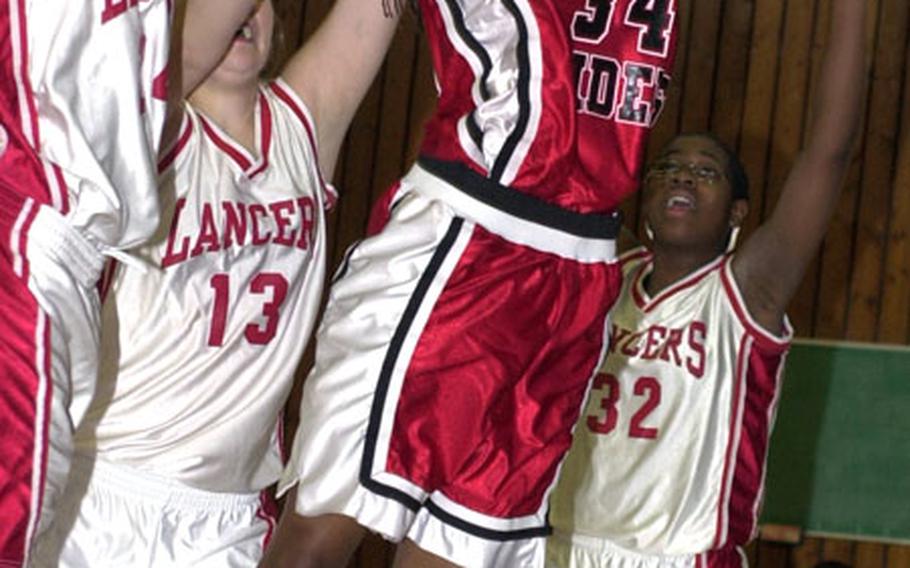 KAISERSLAUTERN, Germany &#8212; To the visitors go the spoils.

Lakenheath, led by the hard-working front line of freshman Trinity Bursey, junior Amanda Hood and senior Sheila Destigter, swept previously unbeaten Kaiserslautern over the weekend to take the lead in the Division I girls&#8217; basketball standings.

She did both, hitting two late field goals and helping double-team K-town&#8217;s top scorer, Layla Hicks, with the game on the line.

Hicks didn&#8217;t start, but scored seven of her nine points in the fourth quarter as K-town tried to overcome a 29-23 deficit.

The Lancers outrebounded Kaiserslautern 8-4 in the final quarter.

On Saturday, the Lancers improved to 7-1 on the season when Hood scored the game winner off a feed from Ebony Morris in a 37-35 triumph.

ANSBACH, Germany &#8212; Brittney Britton tied the game with a free throw in the final minute, then stole the ball and converted a game-winning layup as Ansbach handed Baumholder its first defeat of the season, 39-35, on Friday night.

Baumholder returned the favor on Saturday, posting a 42-32 victory that left both teams at 7-1, 5-1 in the Division III-South race.

Britton also pulled down 10 rebounds in the contest.

Britton and teammate Monique Cowley each had 12 points on Saturday, but the Lady Bucs had a quartet of eight-point scorers &#8212; Katie Feterl, Sarah Karayannis, McNeil and Tiffany Brown. Feterl also had 17 rebounds.

AVIANO AB, Italy &#8212; In a match-up of unbeaten conference leaders, Naples at Aviano split a pair of weekend games.

The teams are tied at 9-1 going into the final weekend of American Schools in Italy League play. Aviano closes with a pair of games at 7-3 Sigonella; Naples hosts Vicenza.

On Friday, Kristen Barnill scored nine of her team-high 19 points in the final quarter, and Mavis Sanders, who scored 11 points, hit a pair of late free throws to ice the game for Aviano.

Alex Petrucci had 22 points and 15 rebounds for Naples.

On Saturday, Naples outscored Aviano 14-5 in the third quarter to take a 35-25 lead that was too much for Aviano to overcome.

Petrucci left the game after a first quarter collision. She needed a stitch in her lip and did not return.

HIGH WYCOMBE, England &#8212; Nicole Lassetter scored 51 points over two games as London Central swept visiting Giessen 62-25 and 55-20 to run its mark to 6-0 overall and 4-0 in Division III-North heading into this weekend&#8217;s games in Brussels.