Lakenheath's Amanda Hood enjoys the cerebral side of pitching 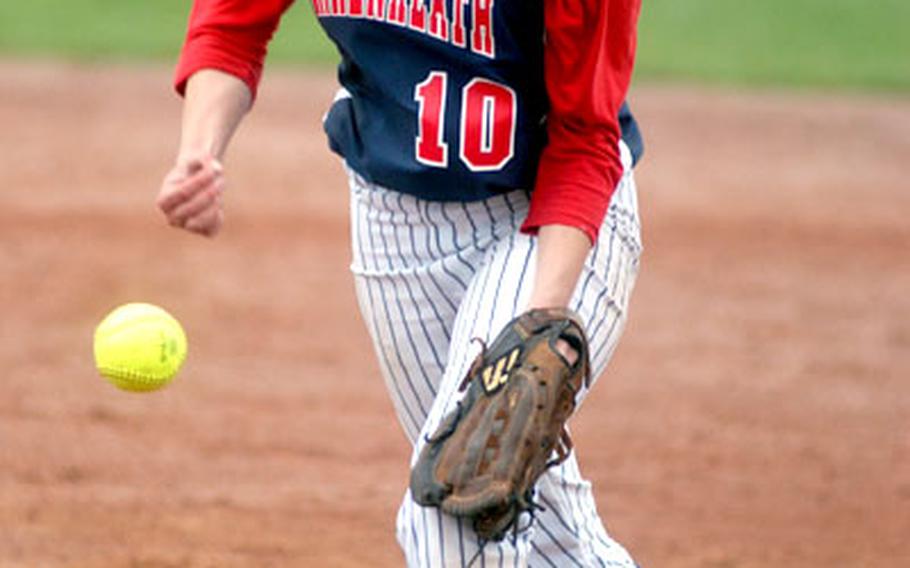 Lakenheath senior Amanda Hood, who has been pitching barely a year, relies on location rather than blazing speed to get batters out. Hood is 6-1 with 37 strikeouts in 31 innings this season. (Ron Jensen / S&S)

RAF LAKENHEATH, England &#8212; Coaches have to be creative sometimes.

John Gilmore, coach of the softball team at Lakenheath High School, needed a pitcher. So everyone pitched during practice last year. Everyone stood out there and whipped the ball toward a catcher, like an audition for a part in a Broadway play.

Some were eliminated. Others flourished. But no one separated herself from the pack like Amanda Hood.

Hood pitched her first game late last season, and has been the workhorse of the team during her senior year.

At one point this season, she pitched 10 innings of no-hit ball and struck out 13 of the 19 batters she faced in one stretch. She is 6-1 with 37 strikeouts in 31 innings this season.

But it is not Hood&#8217;s arm that is impressive on the mound. She is no fireballer, blowing away hitters with sheer speed. For her, pitching is a cerebral exercise.

Hood shakes her head frequently until catcher Shawnalee Bradley calls for the pitch she wants to throw. And then it might be high or low, inside or outside, depending on where Hood thinks the hitter won&#8217;t be expecting it.

Hood, who has a .568 batting average, is where she belongs on the softball field. She appears to be having the time of her life during a game.

It is fitting, too, that Hood&#8217;s skill puts her at the center of the action. The 17-year old honor student is the team captain, just as she was for the volleyball team and the basketball team.

In a recent game, Hood&#8217;s teammates let her down with sloppy defense. But she kept smiling and throwing.

Hood said her role as captain for three teams this year is partly a result of her four years at the school, a rare stretch. She&#8217;s familiar with the coaches, the schedules and the opponents.

Plus, she said, there is nothing better than being part of a team.

She likened a team to a chain. Each link must be strong or the chain breaks. As a captain and a player, her job is to see that there are no weak links.

Hood has been accepted at the Coast Guard Academy in New London, Conn., where her older sister, Tasha, is studying. She hopes to play softball there.