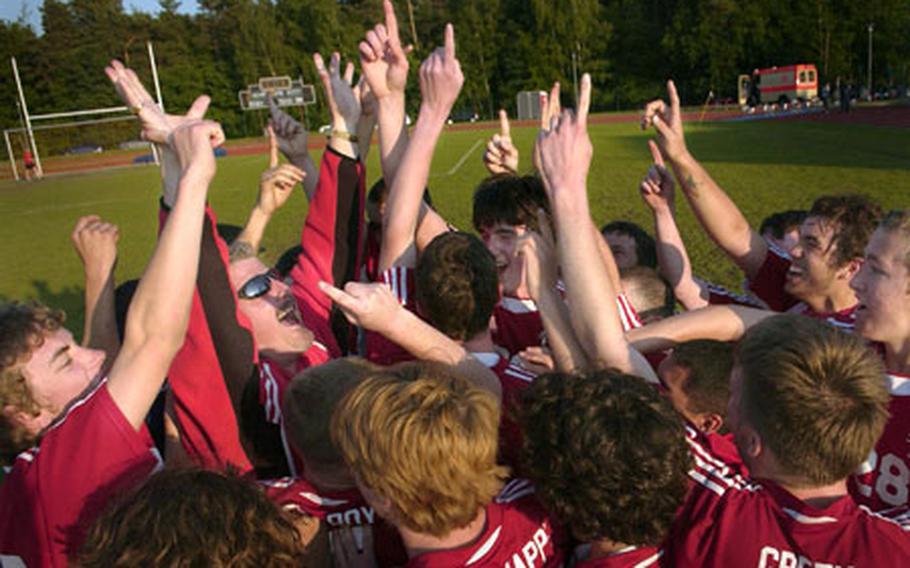 Lakenheath coach Garrett Billington, at left, basks in the sea of hands showing the crowd that Lakenheath is Number 1 after defeating the International School of Brussels for the DODDS-Europe boys Division 1 boys soccer championship. (Ben Bloker / S&S)

Lakenheath coach Garrett Billington, at left, basks in the sea of hands showing the crowd that Lakenheath is Number 1 after defeating the International School of Brussels for the DODDS-Europe boys Division 1 boys soccer championship. (Ben Bloker / S&S) 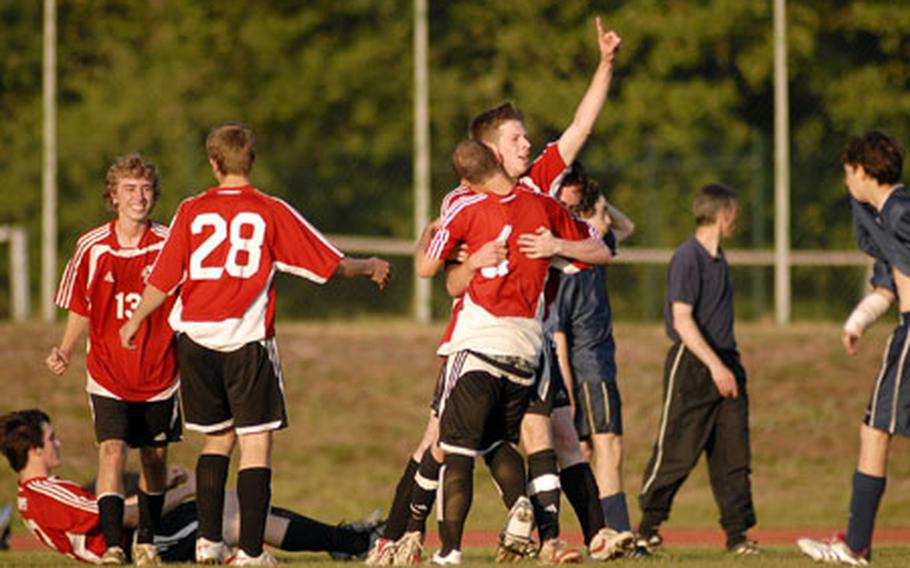 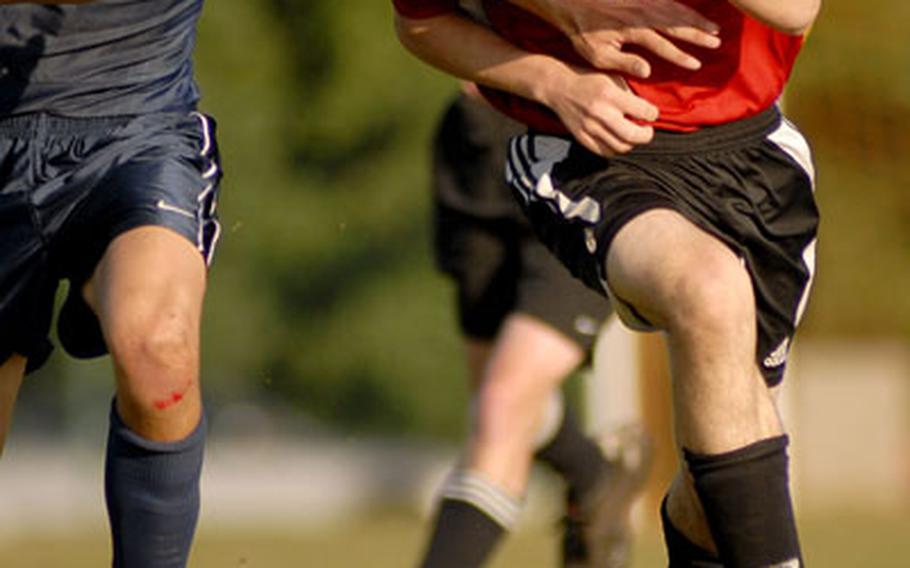 Adam Wopat, a Lakenheath junior, right, fights Gabriel Perez from the International School of Brussels for possession during their Division I championship game Friday at Ramstein. (Ben Bloker / S&S) Robert Brown, a freshman from the International School of Brussels, connects with the ball as Anthony Martinez of Lakenheath closes in during the first half of their Division I championship game Friday at Ramstein. Lakenheath defeated ISB 2-1 to win the DODDS-Europe D-I soccer title. (Ben Bloker / S&S)

Carl Snapp ran on to a pass from Chris Davis along the right sideline and lofted a shot from 35 yards out that sailed into the far upper corner of the net. Then Derek Dean lined home a 45-yard free-kick rocket to give the Lancers a 2-1 victory over the International School of Brussels in the D-I championship game.

&#8220;Maybe one time out of 100,&#8221; Snapp said about his chances of making shots like his first-half strike that came out of the sun and just eluded the fingertips of ISB goalkeeper Javier Torrijos.

Snapp figured in Dean&#8217;s goal, too, leaping in front of Torrijos as Dean&#8217;s kick from near midfield on the right sideline skidded into the goal mouth.

At the time, Dean&#8217;s deep strike appeared to be mere insurance for Lakenheath, which was bent on making Snapp&#8217;s goal stand up.

Dean acted as though that strategy were a no-brainer, given the play of tournament MVP Eric Gallegos in the Lakenheath nets. Gallegos turned away every threat until ISB&#8217;s James Duguid beat him inside the near post from the left side of the box with less than 10 minutes to play.

The sun appeared be behind Duguid&#8217;s low blast as well, though Gallegos, who moments earlier had turned away a point-blank shot, was making no excuses.

ISB&#8217;s goal, apparently, was no big deal either. Gallegos resumed his stellar play as the Raiders pressed for the equalizer in the closing moments. At one point, Gallegos calmly stepped out of the cage to pick off a dangerous pass in front of three ISB attackers.

ISB and Lakenheath were appearing in the first D-I boys final since 1985 that didn&#8217;t involve either Heidelberg or Ramstein, or both. Since then, Heidelberg had won 14 times and Ramstein three. All that ended here Thursday, when ISB stopped Heidelberg 2-1 in the semifinals. Ramstein was eliminated in pool play.

Lakenheath finished the season undefeated, its only blemish a 0-0 tie with Heidelberg during the regular season that gave Heidelberg the top seed, based on goal differential.

Would the Lancers preferred to have faced the Lions in the final rather than ISB and have a chance to rectify the tie?