Kubasaki, Yokota get to answer 'What if' - sort of 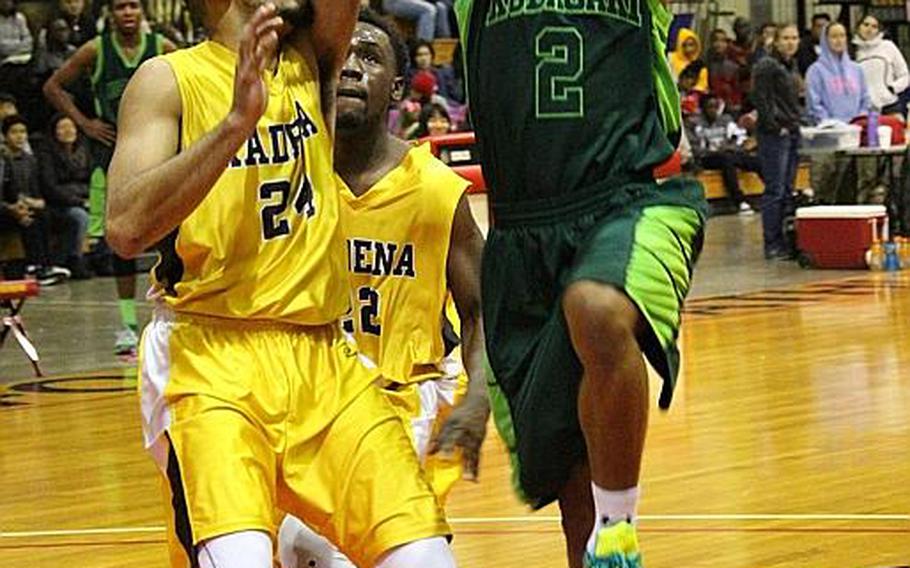 Tatiana Zamora/Special to Stars and Stripes Senior point guard Jacob Green, right, and the Kubasaki Dragons take on Yokota on Saturday at American School In Japan in a showdown between the reigning Far East Divisions I and II Tournament champions. ()

CAMP FOSTER, Okinawa &#8211; They each won their respective Far East tournament titles last February. Now Kubasaki&#8217;s and Yokota&#8217;s boys get a chance to square off on Saturday in a meeting between 2015&#8217;s Division I and II champions.

But while it&#8217;s being viewed by both parties as a nice opportunity for inter-district play, part of the coaches and players on each team wonder what might have happened had the two teams met last February.

Due to a drop in enrollment, Yokota just three months before Far East, on, Nov. 18, 2014, had been made a Division II school.

At the time, some Yokota players expressed disappointment and said they&#8217;d been looking forward to a shot at the school&#8217;s first D-I title since 2006; in fact, some observers felt Yokota could have won D-I.

&#8220;It would have been interesting to see how that game would have played out,&#8221; Yokota coach Dan Galvin said of a hypothetical Dragons-Panthers all-divisions showdown.

All five players were on the rosters of their respective teams a season ago, when the Dragons beat Kadena 76-64 for the D-I title and Yokota topped Matthew C. Perry 58-48 and 78-50 in a two-game D-II final.

&#8220;I would have liked our chances,&#8221; said coach Jon Fick of Kubasaki, which won its fourth D-I title in just nine seasons &#8211; the quickest any coach has gone to four championships after starting to coach a team.

For the Dragons, who&#8217;ve won 27 straight games dating back to last season, their date with Yokota is the second of three games they&#8217;ll play at ASIJ over the weekend. They face the host Mustangs at 3:30 p.m. Friday, then St. Mary&#8217;s on Saturday afternoon.

It&#8217;s been a busy schedule of inter-district games for Kubasaki this season. They, Kadena and Okinawa Christian co-hosted Taipei American and Jakarta International Jan. 7-10, then traveled to Taiwan to play Taipei American, Morrison Academy and Chinese schools over the Martin Luther King weekend.